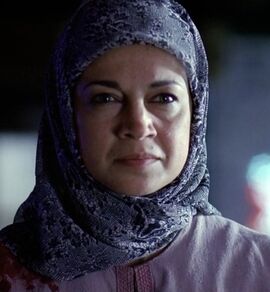 Zaafira is an Iraqi woman - possibly a witch or the Middle Eastern equivalent - on the HBO original series True Blood. Played by Pakistani co-starring actress Anna Khaja, Zaafira makes her debut on the episode "Authority Always Wins" in the series' fifth season. Meeting an untimely demise in the Season 5 episode "In the Beginning" when she was shot and killed by Terry Bellefleur and his squad during the Second Gulf War, she curses the platoon and haunts them for vengeance. Playing a recurring role through the series' fifth season, Zaafira appears in flashbacks as a ghost, and was last seen in the Season 5 episode "Everybody Wants to Rule the World".

Zaafira first appears as an unnamed Iraqi woman in the second episode of the fifth season, "Authority Always Wins," during one of Terry Bellefleur's flashbacks to 2003 in Iraq. She appeared (alongside many others) to be shot and killed by Terry's squad during an altercation initiated by Brian Eller. Through several subsequent episodes, more pieces of the flashback reveal the true events of the night and more about her character.

As Terry and his platoon scanned the aftermath of the massacre, he saw that although the woman had suffered multiple gunshot wounds and had fallen amongst a muddle of bodies, she was still alive. Terry alerted his sergeant, Patrick Devins, of the situation. Patrick then ordered Terry to "dead check her," and Terry begrudgingly obeyed. However, as Terry pointed his gun toward the woman's head, she cursed him in Arabic, wishing, "May the Ifrit burn you all and everything you've ever loved." Terry then shot and killed her. As the squad headed off, Eller set her and the other bodies on fire. Terry looked her way one last time and watched in horror as the ifrit rose from the flames. ("Let's Boot and Rally")

Lafayette Reynolds holds a seance with Terry, Patrick, Arlene, and Holly. Lafayette uses his ability as a medium to contact the woman's spirit in an attempt to get her to lift the curse. She reveals that her name is Zaafira, briefly takes possession of Lafayette's body, and shouts in Arabic at Terry and Patrick. Lafayette then explains that Zaafira will only call off the ifrit and lift the curse on one condition: Terry must either kill or be killed by Patrick. ("In the Beginning")

Zaafira's spirit appears to Terry and Arlene as Terry points his gun toward Patrick's head. Terry is scared to kill him, and Zaafira eases his fear by telling Terry to "do what is right". Terry then shoots Patrick twice in the head. Zaafira smiles as she tells Terry that "blood has been repaid with blood," and she commands the ifrit to come claim the body. The creature then spews from out of her mouth and swoops over Patrick. Finally, Zaafira, and Patrick's body all disappear, leaving nothing but a small pool of blood where Patrick had fallen. ("Somebody That I Used to Know")