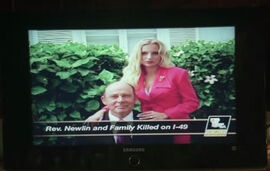 Yvette Newlin was a minor character on the HBO original series True Blood. Played by an uncredited actress, Yvette appears on the True Blood Broadcasting Network, or TBBN, in a news segment about her involvement in a fatal automobile accident. Yvette is the wife of Reverend Theodore Newlin, founder of the Fellowship of the Sun, and appears only on the episode "The First Taste", in the series' first season.

Yvette's personality is never revealed, but she was more than likely honorable and respectful of her husband, the late Reverend Theodore Newlin, founder of the Fellowship of the Sun. Like her husband, she was likely adamant against the passing of the Vampire Rights Amendment.

Yvette is the wife of Reverend Theodore Newlin, founder of the Fellowship of the Sun, an anti-vampire church located in Dallas, Texas

Along with her husband and baby, they supposedly died in a car accident in mid-2008. Her stepson Steve continued with their anti-vampire crusade. ("The First Taste")

It is later revealed by the Dallas vampire, Stan Baker, that he and other agitated vampires under his command were responsible for the deaths of Newlin, his wife and their baby daughter.