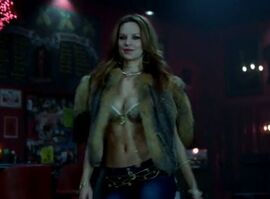 "You promised me a new life!"
―Yvetta, arguing with Eric Northman over his will.

Yvetta was an Estonian exotic dancer on the HBO original series True Blood. Played by Russian guest starring actress Natasha Alam, Yvetta makes her debut on the episode "Bad Blood", at the beginning of the series' third season. Playing a recurring role through the same season, Yvetta worked at Fangtasia, a vampire nightclub in Shreveport, Louisiana, but left on bitter terms due to a dispute over money. Yvetta was last seen in the Season 3 episode "Fresh Blood".

Eric treats and talks to her in a rather harsh way. Although belittled by Eric and Pam, she states that back home she was a cardiologist.

Yvetta walks in and is almost immediately hired because of her sex appeal. She has had a sexual relationship with both Eric and Pam. She is from Estonia, a small country in Europe, but she speaks Russian. ("Bad Blood")

Bitter that Eric has left her no money, Yvetta binds Pam with silver and robs Fangtasia before fleeing Shreveport. ("Fresh Blood")

Yvetta is a human who is not gifted in any way. She has been shown to overpower a vampire, Pam, using a silver chain and her human strength. After Pam was subdued, Yvetta tied the silver chain to a nearby pole, which Pam could not remove. Ginger winds up having to help Pam escape.

Female, 20’s, gorgeously hot Eastern European is Eric’s (Alex Skarsgård) new dancer at Fangtasia. She speaks Czechoslovakian with subtitles and knows how to work a stripper pole. She and Eric have a sexual relationship…2 lines, 3 scenes / POSSIBLE RECUR Actress must be able to dance and be comfortable with nudity.

Retrieved from "https://trueblood.fandom.com/wiki/Yvetta?oldid=143060"
Community content is available under CC-BY-SA unless otherwise noted.