You'll Be the Death of Me

"You'll Be the Death of Me" is the twelfth and final episode of Season 1 of the HBO original series True Blood, and the series' twelfth episode overall.

Sookie finds a link to the string of killings in Bon Temps - and is soon in the murderer's cross hairs again. Tara decides to make the most of her second chance with Maryann. Jason finds a new calling after anti-vampire zealot Orry visits him in jail. Bill tempts fate during his latest attempt to save Sookie. Sam is perturbed by a surprise encounter with an old acquaintance. Lafayette finds himself in the wrong place at the wrong time.

"Well, I'm goin' to head on over to the bar.
...Make sure Terry's not PTSDing all over my clam chowder."
― Lafayette Reynolds

Jason is in the Bon Temps Police Station, willing away things like his leather jacket, bank account and truck to René. Pretty soon, Sookie shows up at the pin to see her brother and to find out why he confessed. She tells him to quit opening his mouth because she thinks she is really close to finding the real killer.

Meanwhile, Tara wakes up in Maryann's beautiful home, and eats a lavish breakfast. Tara is still unsure why Maryann is helping her. At the jail, Jason is visited by Orry Dawson, a member of the Fellowship of the Sun church. He tells Jason that why they cannot condone his actions, killing human women, the Fellowship understands that Jason's motives were pure, and believe that he would be a great "soldier", while he gives him some church literature to read. Back at Maryann's Tara goes for a swim. She meets a handsome man named Eggs playing a guitar. He tells her that he was much worse off than she was when Maryann found him, and that Maryann is miracle worker.

Even though Sookie’s brother is in prison she still managed to show up to work even though Sam told her to stay home. Once there, she is bombarded with everyone’s thoughts about her and her family. A boastful Andy brags about taking Jason in. Sookie is unable to take everyone's hateful thoughts anymore and then tells Sam that maybe she should leave after all but promises to just drive around and not get out of her car since the killer is still out there.

Sam reluctantly agrees and then Sookie head out. Once in her car, it won't start. René appears out of nowhere and offers to fix her car, but, after tinkering under the hood, admits he doesn't know much about cars. He tells Sookie he doesn't mind hanging out with her until Sam gets off of work. She accepts his offer. The audience is left with a close up shot of the hood, with wires cut.

They found it in the garage. Arlene tells her kids to go to their rooms and starts looking through the box they pulled out that was filled with tapes. She finds a Cajun Dialect cassette tape. Sookie and René arrive at Sookie's house. While Sookie prepares beverages for the two, René notices the shotgun by the fireplace.

Back at Merlotte’s, Lafayette discovers René’s construction vest and gives it to Sam to put in the lost in found. Sam takes the vest but recognizes the scent coming from it. He suddenly remembers the smell from Dawn's sheets. Sam hurriedly leaves to find Sookie.

Back at Sookie’s, René has trouble containing his murderous thoughts. Soon, René slips up and Sookie immediately has flashbacks when René slaughtered her Gran. She runs from the kitchen toward the gun and turns around to shoot René who had followed her. However, he was not too scared since he had already taken the bullets out. Sookie runs from the house with René chasing after her. Sookie sees a flashback of René killing his sister for sleeping with a vampire; she also sees flashbacks to when he killed the other girls along with Sookie’s grandmother.

Bill suddenly awakens from his daytime slumber because he could sense Sookie's distress. Bill gets up to rescue Sookie but the sunlight instantly starts burning his flesh. In agony, he continues his attempt to save her. Sookie makes her way into the graveyard with René close behind. She hides in an open grave. After hearing René’s thoughts about checking back in the woods, Sookie thinks the coast was clear, but René is behind her. He grabs her and beats her, and then starts to strangle her.

Suddenly, Sam the dog runs up and bites René. He slams the dog to the ground and starts beating it with a stone. Sam then shapeshifts back into a human and lies on the ground naked. Startled, René begins kicking Sam while he's on the ground, screaming, calling him a freak. Bill struggles to save Sookie while his body burns from the sunlight. Sookie eventually regains consciousness and found a shovel. She hits René in the back of the head. He falls to the ground, but grabs her leg. Sookie screams and slams the shovel down into the back of René's neck, killing him. She then looks over to see Bill burning and rushes to his side.

Sam comes over and picks him up, saying they need to get him out of the sun. Sam lays Bill in a grave, and, together, Sam and Sookie begin to cover Bill with dirt. Later that night Sookie awakes on her sofa, battered and bruised. She finds Tara, Sam and Lafayette at her side. Suddenly, Arlene bursts through the front door bawling and carrying flowers for Sookie. She apologizes profusely to Sookie, and laments how she has the worst taste in men. She asks Sookie if Bill will be alright, and she tearfully replies that she doesn't think so.

At the Bon Temps Police Station, Sheriff Dearborne tells Andy that all of the charges against Jason have been dropped. The marks on Amy's neck matched René's belt. Bud informs Andy that he needs to go free Jason, as this was all his mistake. Angry and cussing, Andy opens Jason's cell. Andy tells him that "he is free to go and that it's a "f**ing miracle!"

Later that evening, Tara and Sam are on the front porch together and she informs him that she wants Sam to look after Sookie for her. Maryann arrives in her expensive car to pick Tara up. Tara introduces Sam to Maryann, and, whispering, Maryann ominously asks Sam if he thought she wasn't going to find him, hinting at some unknown past between the two. Jason comes in to see Sookie. He's angered that René hurt her so badly. The two reconcile, and Jason says that there must be coming that he's meant to do in his life, but he doesn't quite know what it is yet.

Back at Merlotte's Lafayette takes out the trash. Something rushes towards him from behind. Lafayette screams as he climbs onto the dumpster.

Sookie's doorbell rings. She answers it, and is stunned to see Bill, completely healed. Bill says that he fed. Sookie invites him inside and the two embrace. She grimaces from the pain of her injuries, and Bill offers to give her some of his blood so she can heal. Sookie refuses, and says she wants to feel human right now. Bill apologizes to Sookie, saying that he failed her. But Sookie reassures him, saying that he was willing to die for her, and the two kiss.

At Merlotte's, Arlene and Sookie watch the news announcing that humans and vampires could get married in Vermont. Arlene teases Sookie asking if she and Bill will get married; Sam is pissed. Jason is at church with Orry, praising Jesus. Eric returns Jessica to Bill, as he has grown tired of looking after her.

Andy, feeling sorry for himself over his failure in finding the real killer, gets drunk at Merlotte's. Sookie shows Andy a kindness and gets him to go home. Andy, Sookie, and Tara walk to Andy's car in the parking lot; when they arrive they discover an African-American's leg with red painted toenails sticking out from the back seat of his police cruiser. Sookie and Tara scream. 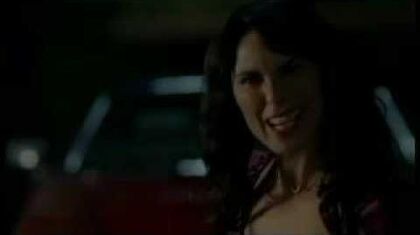 Andy Bellefleur: (to Sookie and Tara, upon finding a body in his backseat) "That ain't mine, I swear."

Sookie Stackhouse: "I gotta get these thoughts outta my head."

Tara Thornton: (seeing her breakfast) "This isn't food. This is sculpture."

Terry Bellefleur: "Your hair is like a sunset after a bomb went off! Pretty."

Orry Dawson (to Jason in jail): "Officially the church can't condone what you did. You took the lives of four women--women who had tainted themselves and their race--but still human women. Hey, (motions for him to come closer) but we do recognize that even though your methods may have been flawed, your intentions were pure."
Jason Stackhouse (utterly confused): "I got no idea what you're talking about."
Orry Dawson: "That's smart. Don't admit to anything."

Tara Thornton: "This one time Lafayette went to Marthaville for the night, he ended up go-go dancin' in Palm Beach for like eight months."
Sam Merlotte (rolling his eyes): "Fantastic!"

Jessica Hamby (enters with Eric and Pam): "Hi, daddy."
Bill Compton (furious): "What is this?"
Eric Northman: "There are favors and there are... favors."
Pamela Swynford de Beaufort: "She is extremely annoying."
Bill Compton: "You can't do this! We had a deal!"
Eric Northman: "Yeah, well now the terms have changed. She's yours, unless you wanna give me Sookie?" (laughs as he draws his fangs) "It's just a suggestion. Though a few nights with this one may change your mind."
Pam: "Good luck."
Eric Northman (in Swedish, as they leave): "O du ljuva frihet." (translation: Oh, sweet freedom.)
Jessica Hamby (as Bill turns to her): "So, who's good to eat around here?"