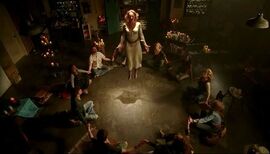 A witch is a man or woman who can access certain supernatural powers of nature (witchcraft), and utilize that either for dark or light purposes. Witches are one of the most powerful antagonists of the vampire race in the HBO original series True Blood.

Humans who practiced magical powers were called "witches." While the origin of witchcraft remains unknown, it is believed that witches have existed for thousands of years, passing down their knowledge and skills through generations of family lines. Contrary to popular belief, not all witches channel their power from demons, nor do they worship the Devil. Instead certain witches, more specifically wiccans, channel their power from nature and may practice their witchcraft however they see fit. According to Marnie Stonebrook, witchcraft is supposedly older than vampirism, and claims that vampires have tried for centuries to repress the magic that is more powerful than them.

The witch trials of the Inquisition was an era of bloodshed and darkness, for both witches and vampires. In western Europe there was a faction of aggressive vampires, known as ticks, who were not content to hunt from outside human society. Embedding themselves wherever human weakness made it advantageous to their agenda, the state of things in Spain in the Middle Ages provided one such opportunity. One of the architects of this plan, dun Santiago, delighted in a fear-based quality of feeding. He and his devotees devised famous torture devices employed by the Spanish Inquisition, all in the name of turning their victims into human cattle.

Santiago and his followers eventually encountered a complication in their feeding routine when they stumbled across a witch named Antonia Gavilán de Logroño. While most of the so-called magic practitioners condemned during the Inquisition were not witches, just women hand-selected by the vampire priests to be terrorized and fed upon, Antonia had been a necromancer. Even though her actions (e.g. healing the sick or giving comfort to the dying) posed no threat, the vampires decided to dispatch her before she became one. Antonia ultimately formed a bond with her fellow prisoners, expanding the reach of her power, and when she was to be burnt at the stake, she cast a spell that forced all the vampires of the area to walk into the daylight, dying in the process. After the discovery of Santiague and his faction of vampires within the Church, the priests decided that any and all charges administered by the vampires were nonviable by the court and all prisoners arrested under their orders were freed. According to Luis Patiño, he spent months tracking down all those who witnessed the event that exposed the existenced of vampires to the Spaniards. Whilst some of the witnesses were glamoured to forget, others he simply killed. It is unknown if the women involved with the summoning spell were among those who were glamoured or murdered.

According to Nan Flanagan, ever since the Spanish Inquisition that took place in the 1600s, the practice of witchcraft has severely declined over the centuries, to the point where most vampires no longer view witches as a threat. While most modern practitioners, such as Holly Cleary, tend to follow Neopagan religions and commonly treat witchcraft as a spiritual practice, it is known that some humans continue to practice witchcraft specifically for the power that comes with it. Furthermore, Marnie claims that in order to ensure that the practice of magic remained unpopular, vampires have spent countless centuries demonizing the once sacred art of witchcraft. Marnie believes that by installing fear into the minds of humans, mainstream society now has the wrong impression of what magic truly is and thus this is the reason most people no longer practice.

Witchcraft is a practice of magic that encompasses many different types of activities including astrology, divination, spell casting, and spirit communication. It includes the practices of many cultures, nations and religions as well as many books and writings dating back to ancient times. Depending upon the individual, some witches practice their power by certain belief systems, such as Shamanism, Voodoo, Wicca, or any number of other magical practices from countries and cultures all around the world. Although the majority of witches are portrayed as being spiritual human beings who use their powers for healing and protection spells; in the case of Marnie Stonebrook, it has been proven that not all witches are benevolent and are capable of practicing magic for malevolent purposes.

Depending on their level of skill, witches possess a number of magical abilities. By joining together, witches can increase their magical strength. According to Bill Compton, knowledgeable and skilled practitioners are capable of becoming very powerful, and have been known to match, or in some cases overpower, even the oldest of vampires. While the limitations of their power remain unknown, it is believed that witches are one of the most powerful creatures in existence. Among their many supernatural talents are: