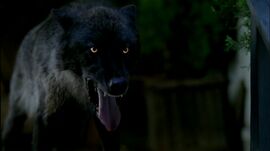 Werewolves are a supernatural species that endows individuals with the ability to physically assume two different forms: human and wolf. They are a genus of the Were- variety, which includes werepanthers and shapeshifters. Unlike vampires, on the HBO original series True Blood, the existence of werewolves is not public knowledge.

Werewolves are also referred to as "weres," or just "wolves." A female werewolf is called a "werebitch". Children are called "pups."

It is unknown when werewolves first evolved, but they are known to have existed for millennia. Russell Edgington, who spent much of his existence using packs of wolves to do his bidding, stated that he had first started collecting werewolves 2000 years ago. ("Everybody Wants to Rule the World")

Generally, werewolves are territorial and function collectively in packs, and are led by a packmaster. However, there are those who live without packs, either by choice or through social rejection; they are known as lone wolves, and are considered outcasts. They are also called omega wolves. They are secretive and fear the discovery of their existence to the human public. When the Shreveport pack felt threatened with exposure by the well-meaning human organization Vampire Unity Society, they hunted down and killed every member of the group, save for Nicole Wright, who barely escaped with her life. ("You're No Good")

As with all Weres, werewolves can shift from their animal form to human form at will, except during nights of the full moon. In the Were hierarchy, they are considered to be dumb brutes. They are physically stronger than shapeshifters, but are supposedly intellectually inferior to them on account of their ravenous and beastly nature. Werewolves are considered to be smarter and stronger than werepanthers, who have been rendered relatively weak and feeble-minded due to several generations of inbreeding.

Among each other, werewolves follow strict social rules. Upon settling in a new place, a werewolf is expected to register with the local pack. If he or she does not, that wolf can expect an angry visit from the packmaster. If a wolf falls out of favor with his or her pack or partner, he or she can be banished, known as abjuring.

Biologically, there are very few differences between humans and werewolves. They are not immortal, and their rate of aging and expected life span is the same as humans. They have the same needs and weaknesses as humans. The one biological difference between werewolves and humans is body temperature; werewolves are slightly warmer than humans.

In their human form, werewolves are completely indistinguishable from regular humans. When they are close to shifting into their wolf form, their eyes are usually the first body parts to change. The colors of their hair, skin and eyes do not necessarily correspond with the color of their eyes and fur in their wolf forms.

In their wolf form, they are indistinguishable from regular wolves.

In their human form, a werewolf's diet is unremarkable to that of a regular human. In their wolf form, they can consume anything a regular wolf can, including the raw meat of animals, humans and other werewolves.

As with all Weres, the Wolf is hereditary. An individual must be born a werewolf, inheriting his or her status from one or both parents. Werewolves are able to reproduce with humans and other Weres; the species of the offspring of these disparate couplings occurs randomly.

Werewolf children are called "pups." Pups are not born with the ability to shift into their wolf form; this generally occurs spontaneously at some point in their youth. From that point on, a werewolf can shift at will.