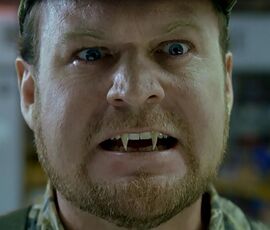 Wayne Bosen, also known as Billy Bob, and credited as Good Old Boy Vampire, is a vampire on the HBO original series True Blood. Played by Canadian co-starring actor John Henry Canavan, Wayne is a good old boy living in Louisiana. Living on the synthetic Tru Blood, rather than drinking the blood of humans or animals, Wayne is the leader of the Friday Night Fish Fry, and appears only in the series' premiere episode "Strange Love", in the series' first season.

Born in 1949 and made vampire in 1996, Wayne Bosen was the leader of Friday Night Fish Fry where he and his high school buddies tossed back six-packs of Dixie Draft, fished ’till they couldn't see straight, then fried up whatever they caught. One Friday Fry Night in ’96, a man calling himself Buck approached, talking like they all had the same history, only none of the guys seemed to recall him. They blamed their fuzzy memory on too much Dixie and handed Buck a rod. By the time the boat came back, Buck had made meals out of all the other boys and turned Wayne.

Wayne interrupts a conversation in which a convenience store's clerk was passing as a vampire to trick a young couple, revealing himself as a true vampire scaring both customers and the clerk; he pays for his Tru Blood and then threatens the clerk once more. ("Strange Love")

Retrieved from "https://trueblood.fandom.com/wiki/Wayne_Bosen?oldid=136954"
Community content is available under CC-BY-SA unless otherwise noted.