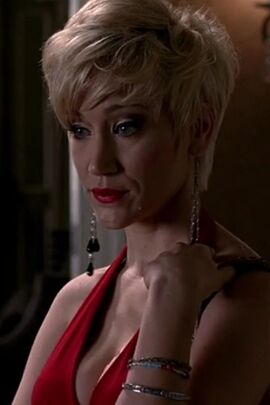 Veronica was a minor character on the HBO original series True Blood. Played by American guest starring actress Marina Benedict, Veronica is a fangbanger working for "Human Edibles", a company which provides vampires with the delivery of a human who provides the vampire with blood and sexual favors in return for a small fee. Veronica meets an untimely demise during her only appearance, on the episode "The Sun", in the series' sixth season.

Veronica is a fangbanger currently employed at "Human Edibles", a company which provides vampires with the delivery of a human which provides the vampire blood and sexual favors in return for a small fee.

Jessica Hamby calls Human Edibles for some service. Veronica drives over and gives Jess the prices, Jessica then tells her that Veronica isn't for her to feed on, but for her maker, Bill. Showing Veronica Bill in a vegetable-like state. After determining that something is wrong with Bill, she leaves and says that Jessica owes her $50. Before she can make it out the door, her bones begin to break and is drained of her blood by Bill. ("The Sun")

Retrieved from "https://trueblood.fandom.com/wiki/Veronica?oldid=141573"
Community content is available under CC-BY-SA unless otherwise noted.