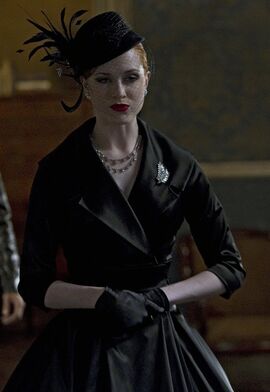 Title Information
Duties
Rule their respective kingdom and the vampires in it.
Notable features
Known bearers

A Vampire Monarch is a vampire who rules over a U.S. state on the HBO original series True Blood. The state, which also forms the vampire monarch's Kingdom, or, in the case of the Vampire Queen of Louisiana Sophie-Anne Leclerq's territory, Queendom, is overseen by the vampire monarch, who also has authority over his or her vampire subjects. Although the territories are under complete reign by their individual monarch, they still remain under the jurisdiction of the Vampire Authority in the vampire hierarchy.

It is not yet known if age or status has anything to do with crowning a king or queen, but it is assumed that a vampire has to have done something very significant or impressive enough to be granted the title of king or queen (as a relatively young vampire Bill Compton managed to reach the rank of vampire king simply by helping the AVL destroy Sophie-Anne Leclerq, the previous monarch, for selling vampire blood).

A vampire Kingdom or Queendom can be split into districts which are governed by an appointed Vampire Sheriff who serve under the reigning King or Queen of the State. Those who closely serve a king or queen are considered to be members of their royal court.

When two vampire monarchs marry, an allegiance is formed between them. Upon the death of either one, the other becomes the ruler of both. When Russell Edgington was entombed, as their marriage eventually becomes recognized by the Vampire Authority, Queen Sophie Anne of Louisiana, as his widow, also becomes the Vampire Queen of Mississippi before her death, after which Bill Compton becomes the King of Louisiana.

Upon the death of a reigning monarch, the Vampire Authority will appoint a new king or queen.