watch 01:58
'True Blood' Profile: The Vampire Authority
Do you like this video?
Play Sound 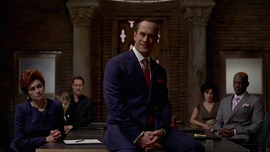 "Are you serious? Who are the Authority? What gave them the authority? Nothing. No one. They took it, as I am taking it today. I no longer recognize the.. Authority."
―Russell Edgington[src]

The Vampire Authority, or simply the Authority, was a semi-religious, clandestine council on the HBO original series True Blood. Originally composed of eight of the most politically powerful vampires in the known world, the Authority has since lost all original members to the True Death and is now technically defunct.

True to its namesake, this council was the ultimate authority over all vampires across the globe, overseeing matters of both religious and political purview in relation to the vampire population. It was worshiped by many and feared by even more. The Authority acted as the main antagonists of the fifth season, led by Salome and manipulated by Lilith.

"I swear fealty now, and always to the one true Vampire Authority, whose wisdom and justice I..."
―Jorge Alonso de San Diego[src]

The Authority was originally created to protect the blood of Lilith, the original vampire. Lilith was estimated to be over eight thousand years old and created by God Himself, allegedly in His own image - a vampire. The Vampire Bible says that after she met the Sun, her progeny collected her remains the following night. Later transferred to a flask containing only her blood, the Authority was said to have guarded it ever since. It is from this lineage and the blood of Lilith that the Authority derives its power and religious stature.

The Authority itself was said to be thousands of years old. The halls of its latest sanctum were supposed to date back to the Byzantine era. However, Eric Northman spoke of the Authority's existence of only five hundred years as a commonly known fact, casting doubt on its antiquity.

It was led by Guardian (of the Blood) Roman Zimojic for over four hundred years, working in secret to acquire absolute power over the vampire population. Using state-of-the-art technology and a secret police composed of mercenaries and assassins (both human and vampire), the Authority controls every aspect of institutionalized vampire society, from the monarchs to the agenda of the American Vampire League, by setting law, administering punishment, and settling disputes.

Defying the Authority was considered treason, even blasphemy.

The Authority sanctions all vampire monarchs known to hold crowns and will forcibly remove, by way of the True Death, any king or queen who loses its favor. Some degree of the Authority's oversight of the monarchs was exercised by the Magister, the highest adjudicating official in the New World. The Magister was sworn to serve the Authority. It was known that many vampires fear it, though Russell Edgington mocked the idea.

The Authority consisted of a chief of state and the Guardian, who was assisted and advised by six Chancellors. Nominally, each Chancellor was assigned to oversee a specific continent, but in practice, the Chancellors shared their duties when necessary.

Nothing is known about how Guardians or Chancellors were selected, though Chancellor Agrippa mentions that she sponsored Nora's appointment, suggesting that incoming Chancellors require the recommendation of a sitting one to be considered.

Due to the Authority's secret nature, not much was known about its official policies. Since at least the 20th Century, mainstreaming was the focal point of the body's agenda. It was the brainchild of and masterminded by the Authority under the leadership of the late Roman Zimojic. The idea of mainstreaming was also part of an agreement between the Authority and the United States government. The Authority, at the height of the Authority's support for mainstreaming, feeding in public was punishable by the True Death. However, several of its members were never true supporters of the policy and continued to feed and kill in private.

Following the coups which culminated in the True Deaths of Guardian Roman and Chancellor Braun, Sanguinistism was supported by the Authority for a time.

All of the Authority Chancellors have now either met the True Death or resigned, as have many of the Authority's employees and guards. It is likely that the U.S. Military launched an assault, or at least an investigation, on what was left of the Authority due to the death of General Cavanaugh.

Shortly after the downfall of the Authority, its headquarters was destroyed; removing all traces of its origins.

Russell Edgington was also opposed to the Authority for a time due to their being an obstacle for his ambitions and later for the threat he posed to mainstreaming. After he was freed by Salome Agrippa and played his part in her coup, he joined the Authority for a short time, but eventually dissented from them, finding the Sanguinistas just as irritating as the mainstreamers.

The United States Government made it quite clear that a Sanguinista-controlled Authority would not be acceptable, as per their original agreement with Roman, suggesting that the U.S. Government was officially allied with Roman's mainstreaming.

Behind the Scenes[edit | edit source]

Retrieved from "https://trueblood.fandom.com/wiki/Vampire_Authority?oldid=142274"
Community content is available under CC-BY-SA unless otherwise noted.