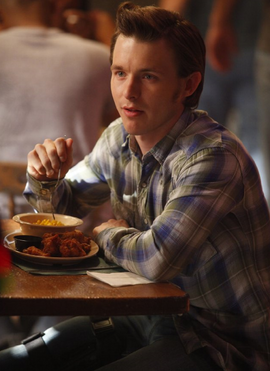 "There ain't no heaven, and hell's a dog fight. I’m gonna disappear like I never was, that’s what I want."
―Tommy Mickens, to Sam Merlotte[src]

Tommy Mickens was the younger brother of Sam Merlotte on the HBO original series True Blood. Played by American starring actor Marshall Allman, Tommy makes his debut on the episode "Bad Blood" at the beginning of the series' third season. Playing a recurring role through the series' third and fourth seasons, Tommy was the son of Melinda and Joe Lee Mickens. Killed by werewolf Marcus Bozeman, Tommy met an untimely demise in the Season 4 episode "Burning Down the House".

Tommy is first seen when Sam goes up to him at a mechanic's garage. Sam asks if he is Tommy Mickens, he says that the Tommy that he is looking for six months ago, then Sam leaves. ("Bad Blood")

Tommy finds Sam camping outside of his house and Tommy points a gun to his head and tells him to get out the car. Tommy brings Sam into the house where then Tommy finds out Sam is a shapeshifter and that he's his older brother. Tommy gets jealous and tells Sam he could have his parents and he walks out. ("Beautifully Broken")

"It Hurts Me Too"

Later Sam follows Tommy and they talk about their messed up lives. Tommy then plans to take a break by running and Sam joins him. While running Tommy tries to get Sam killed by standing in front a moving truck and at the last minute when Sam is next to him Tommy shifted into a hawk and flew away. Sam barely got away. When Tommy was at home Sam walked in and told Tommy that he doesn't appreciate Tommy trying to get him killed and Tommy replies that he doesn't appreciate Sam acting like he belongs there. ("It Hurts Me Too")

Tommy later tries to steal money from Sam's safe when he and their parents visit Bon Temps. After Sam finds him sleeping in the woods Tommy explains how he needs to support his parents. Sam forgives his brother and gives him a job as a bus boy in Merlotte's. Tommy is very pleased and starts to warm up to Sam. ("9 Crimes")

During his first night at work, Tommy shows interest in Jessica Hamby as he tells her that she is a "smoking hot vampire," and both have a small moment before Tommy's father Joe Lee calls in a fury telling him he must come home, but Tommy stays at work.

He asks Sam to sleep in his trailer and he agrees. Later, Joe Lee bursts in and demands Sam give back his son, and that he owns him "from head to tail!" Sam is extremely alarmed at this behavior and tries to get Tommy to tell him what is going on. At first Sam assumes an abusive relationship is going on between them because Tommy's body is covered in scars. ("Trouble")

"I Got a Right to Sing the Blues"

After Arlene tells Sam that his parents own a pit bull they took out that morning, and Tommy has not come into work, Sam realizes what is going on. Melinda and Joe Lee have been using Tommy in his shifted form to make money in dog fights. ("I Got a Right to Sing the Blues")

Sam tracks the Mickens to the dog fighting ring and stops Tommy's fight. After Sam offers him a better life than with his parents Tommy leaves with him. ("Hitting the Ground")

When Tommy tells Sam that he lost his family because of him and he has no way to make it in the world, Sam suggests he get a job. Tommy confesses to Sam that he is illiterate. Doubting that Sam will shoot him, Tommy picks up the bag of money and leaves; Sam's gun fires toward him. ("Evil is Going On")

Sam pays for Tommy to have physical therapy and goes to anger management with a group of shifters. Tommy moves in with Maxine Fortenberry, preying on her loneliness after her son Hoyt left home. ("She's Not There")

Luna Garza visits Sam at work and he walks her to the door. Tommy, who is sitting at a table, asks who she is. Sam tells Tommy to mind his own business.

At Sam's shifter meeting, they discuss what the freakiest thing they've ever shifted into was. Luna silences everyone when she admits she turned into her own mother. She explains that her mother died giving birth to her. In Navajo culture, there's the belief that skinwalkers were horrible, evil witches whose powers allow them to transform into any animal on Earth. They are said to gain their powers by killing another shifter from their own family. She says that the feeling of being somebody else was crazy and scary at first, but then became exhilarating because she got to be her mother, who she never met. Luna sniffs the air, sensing another shifter. Sam gets the scent, and takes off. He sees that Tommy has been listening the whole time. Tommy sees Sam running toward him, and takes off. They shift into owl form and Sam flies after his brother.

Tommy catches Sam, and they accuse one another of betrayal; Sam for lying about the anger management classes and Tommy for lying about his leg, which has obviously healed. Tommy softens and tells Sam that he just wants to be brothers. Sam doesn't trust Tommy but tells him that they can slowly chip away at that and try again to start a relationship. ("You Smell Like Dinner")

Tommy is still living with Maxine, and during one of her many calls to the home shopping channel, he answers the door to a prospector wanting to buy the natural gas rights on her property. Tommy keeps the news to himself, and goes to Sam with a plan to steal the proceeds from selling her rights. Sam is unimpressed, and urges Tommy to come clean. ("If You Love Me, Why Am I Dyin'?")

Tommy is attacked by Joe Lee Mickens and accidentally kills him and Melinda while defending himself. Shortly afterwards, he tells Sam about the murder and they rush to dispose of the bodies. ("I'm Alive and on Fire")

Tommy saves both of them from being discovered by Andy Bellefleur after he spotted Sam on the road and stopped him to check the car. To Andy's surprise, when he opened the back of the car he discovered a huge crocodile (Tommy, transformed) and was scared off. ("Me and the Devil")

Tommy's shock and erratic behavior seems to have settled after all this, especially with his mother's death. After Arlene's and Terry's home caught fire, Sam asks Tommy to run the bar and he accepts. However, while getting ready for work, he transforms into Sam, as after killing two of his family members, Tommy has become a skinwalker.

He spends the day disguised as his brother, fires Sookie from the bar and flirts with the female customers. He talks to Maxine Fortenberry who, thinking she is talking to Sam, vents about Tommy's character after which he leaves in a frustrated huff. Later that night, while still disguised as Sam, Tommy gets an unexpected visit from Luna Garza, who had come to confess her feelings about Sam. Tommy remains silent and takes advantage of the situation to have sex with her. After making love with her, he tells her to leave, causing Luna to think that Sam was using her and leaving her enraged. He then faints, and the real Sam finds him unconscious on the floor. ("I Wish I Was the Moon")

A very worried Sam rushes his brother to the ER. After Tommy wakes up, he assures both hospital staff and his big brother that he is well and just wants to go home. When Sam calls Luna later on, she angrily hangs up on him. After he goes to confront her, Sam learns about the events of the previous night and figures out that Tommy has become a skinwalker and had been impersonating him all day. Livid, Sam confronts his younger sibling and throws him out once and for all. ("Cold Grey Light of Dawn")

Desperate for money, Tommy breaks into Maxine's home. He steals some of her clothes and transforms into her. He then sets up a meeting with Paul McClatchy and sells her gas lease rights to him for $7,500. He goes to the woods, vomits because the strain of the transformation and passes out. ("Spellbound")

Tommy is back at Merlotte's when Werewolf pack leader Marcus Bozeman comes in. He asks for Sam and leaves a card for him, wanting to meet later that night. Tommy learns that Marcus has a vendetta against Sam because he is seeing Luna, Marcus' ex. Tommy shifts into his brother again and goes to meet Marcus in Sam's place. He walks inside the garage and mouths off, causing Marcus to get angry and hit him. The rest of Marcus' pack begin to beat him until his body shifts back into his own. Alcide takes the injured Tommy away quickly to try to save his life. ("Let's Get Out of Here")

A convulsing Tommy begs Alcide to take him home to Merlotte's. Once there Sam and Alcide want to give Tommy some V to save his life, but he refuses, choosing to die in peace instead. Both brothers express their love and Tommy finally dies content. Sam, however, swears revenge on Marcus. ("Burning Down the House")

Tommy was born as a shapeshifter, able to change into many animals, such as birds, dogs and alligators, but not into a different human form, the reason given is that humans are too complex.

After killing his mother, he becomes a Skinwalker, gaining the ability to shift into another human being. ("I Wish I Was the Moon")

A dog is his go-to shift, which means it is the easiest animal for him to become and he also shares some traits with a dog such as a keen sense of smell. A unique trait of his shapeshifting abilities is the ability to quickly shift from one animal to another (which has not been seen in other shifters), which is something that his older brother has not learned to do yet.

18 to 25 years old, dirty but good-looking, with a scar on his face from ear to cheek, he is Sam’s (Sam Trammell) long lost younger brother who works at a Tire Depot in Arkansas. Tommy’s family has a bad reputation for skipping out on their rent and owing money all over town. When Sam approaches him, Tommy hides his identity and claims to be someone else. He’s unaware who Sam is. BACKSIDE NUDITY…SERIES REGULAR

Retrieved from "https://trueblood.fandom.com/wiki/Tommy_Mickens?oldid=143708"
Community content is available under CC-BY-SA unless otherwise noted.