"The Original Pilot" refers to the unaired version of the first episode of Season 1 of the HBO original series True Blood. Shot in the summer of 2007, and virtually identical to the series' aired version, "Strange Love", the un-aired episode's primary difference is the inclusion of American actress Brook Kerr in the role of Tara Thornton.

The pilot episode, shown to a test market which then decided whether or not the show was worth producing, was shown, with decent reception. The show was ordered by the HBO network for a 2008 premiere, and while Brook Kerr stars as the original incarnation of Tara Thornton, creative differences resulted in her being replaced by American actress Rutina Wesley when the series finally aired.

Two years after vampires have "come out of the coffin", the life of twenty-five-year-old waitress Sookie Stackhouse is changed when one hundred and seventy-three-year-old Bill Compton walks into Merlotte's Bar and Grill in Bon Temps, Louisiana. Meanwhile, Sookie's friend Tara Thornton comes to work at Merlotte's while Sookie's tom-catting brother Jason Stackhouse finds himself on the wrong side of the law.

"Bill? I thought it might be Antoine, or Basil, or-or-or like Langford, maybe.
But, Bill? Vampire Bill?!"
― Sookie Stackhouse, to Bill Compton

The trailer below was the trailer released for the aired version of the series' first episode, "Strange Love". 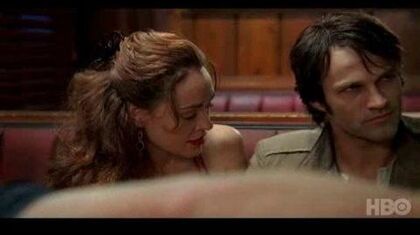 Sookie Stackhouse: "Oh, they’re just staring at me because my brother’s in some kind of trouble with the police. But Bill, did you know Maudette Pickens?"
Bill Compton: "I did not. They are staring at us, because I am a vampire, and you are mortal." 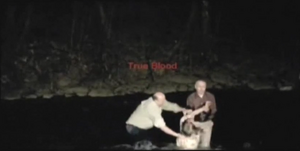 Lafayette and Brook Kerr in the role of Tara.

Brook Kerr as Tara, upset at patron who snapped his fingers at her

Brook Kerr still telling off the customer, while Lafayette walks away in disbelief

Lafayette, smiling while Brook Kerr as Tara tells off patron

Tara, talking about being named after a plantation

Tara asking Sam how much he is paying her

Sam telling Tara she made $20

Brook Kerr as Tara, and Sam

Brook Kerr as Tara Thornton, not really happy with only $20

Tara, distraught about not being an employee

Sam, thinking it over

Tara, asking for a job

Sam, taking a drink of coffee

Sam, still thinking it over

Tara, excited because Sam is going to give her a shot

Sam Merlotte, handing a book of cocktail recipes to Tara Thornton, to study

Tara, looking down at the book Sam gave her

Brook Kerr as Tara Thornton, telling Sam Merlotte that she has been mixing whiskey sours for her mom since she was in the first grade

Brook Kerr as Tara Thornton, lounging in an aisle at the Super Save-A-Bunch

In walks a customer

The customer happily marches in, looking for an employee

Brook Kerr as Tara Thornton, after having quit the Super Save-A-Bunch

Sookie, talking to Tara about Sam

Brook Kerr as Tara Thornton, on her way to see Sookie Stackhouse 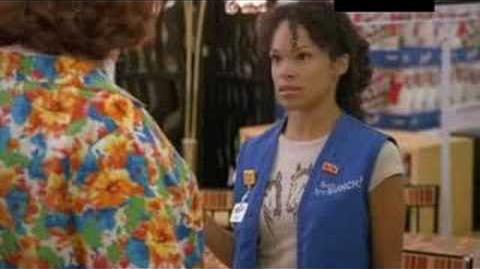 Retrieved from "https://trueblood.fandom.com/wiki/The_Original_Pilot?oldid=144584"
Community content is available under CC-BY-SA unless otherwise noted.