The Fourth Man in the Fire

Sookie tries to hold herself together in the wake of another possible tragedy. Tara is amazed by Lettie Mae's turnaround, and considers similar therapy for herself after lashing out at Sookie and Sam. Jason's new squeeze Amy charms the crowd at Merlotte's, but shows a darker side to Jason when their V juice well runs dry. René pops the question to Arlene while Sookie is baby-sitting her kids. Later, at Bill's request on behalf of Eric, Sookie agrees to use her gifts to help Eric, a powerful vampire sheriff, root out a thief at Fangtasia.

"You're entirely different.
And the beauty and the tragedy of it, is that you don't know just how different you are."
― Bill Compton, to Sookie Stackhouse

Sookie spends the morning helpless and worried, thinking that Bill was killed in the fire. Jason wakes up with Amy, thinking they had sex. It turns out however, that they were simply having an extraordinary V trip. The two continue to grow closer when Jason opens up to her about his parents' tragic deaths years earlier. Tara is amazed at Lettie Mae’s seemingly instant recovery. Tara has a huge fight with Sookie about her relationship with Bill.

That night, Sookie takes flowers to Bill’s grave and cries. As she is walking back, a creature rises out of the dirt and grabs her. Sookie screams and tries to fight back until she realizes that it is Bill and the two have sex in the dirt. The next day, Jason introduces Amy to everyone at Merlotte's. Amy winds up being hired as the new waitress while Sookie tries to warn her about Jason’s tom-catting ways. Amy suggests Sookie not be so quick to judge him.

Tara lashes out at her mother and her mother's friend, Mable. After sleeping with Sam again, she snaps at him for being a racist. Sookie and Bill babysit Arlene’s kids. While pretending to have a flat tire, René proposes to Arlene who accepts. Mike Spencer, the coroner, identifies the fourth body in the fire. I turns out to be Neil Jones, his assistant, who was secretly a Fangbanger.

Sam is interrogated by Sheriff Bud Dearborne and Andy. They ask him some questions about the fire. Andy also has some questions about why he saw Sam running through the woods naked, to which Sam replies he comes from a family of naturists. Sam says he grew up in a colony and that he goes running naked through the woods once a year to honor them. Andy later checks this out and finds that Sam was lying about having grown up in a naturist colony. After talking with Lafayette about her mother, Tara starts thinking that she may need an exorcism of her own.

Jason sees Amy’s darker side when she reveals that she needs more V, but Lafayette won’t sell it to him anymore. They decide to follow him that night and discover that he gets his V from a vampire named Eddie Fournier in return for sexual favors. Bill returns home to find Eric in his bathtub. Eric says that he needs Sookie to do some work for him. Tara goes to Miss Jeanette to get her exorcism.

After Lafayette leaves, Jason and Amy kidnap Eddie and shove him into Jason’s truck. Sookie reluctantly goes to Fangtasia where Eric reveals that he needs her to use her telepathy. He wants to find out which one of his employees has stolen $60,000. Sookie agrees, but only if they hand the culprit over to the police. She learns that a woman named Ginger knows who took the money, but her memory has been wiped with glamouring. This leads them to the conclusion a vampire must be responsible.

At that moment Longshadow leaps across the bar, his fangs bared and attacks Sookie. 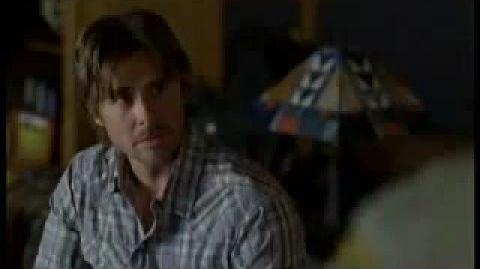 Arlene Fowler: (talking to Sookie about her engagement) "I know I've done it four other times but it never gets old."

Bill Compton: "And the beauty and the tragedy of it is... that you don't know just how different you are."

Eddie Fournier: "I always look forward to Monday nights. First I watch Heroes, then I have you."

René Lenier: "Arlene Fowler, will you do me the honor of being my wife?"

Sookie Stackhouse: "You cannot check me out like a library book!"

Sookie Stackhouse (after Tara comes charging into the house): "Watch your feet! I just waxed!"
Tara Thornton: "I hope you mean the floor."