After saving Sookie from the Rattray's revenge, Bill uses his vampire blood to heal Sookie and it leaves her with some strange side effects. In return, Sookie invites him to her house for a get-to-know-you gathering with Jason, Tara, and Gran. Jason is released from custody, having only been a person of interest in the murder investigation of Maudette. He continues his amorous ways with Dawn, discovering her to also have had encounters with a vampire. Tara expresses her interest in Jason, while the Rattrays are killed by an apparent freak tornado. Later, out looking for Bill, Sookie comes across strange vampires.

"I'm on my way to a party in Monroe.
And hell no, I ain't swingin' by to pick your needy ass up, hooker."
― Lafayette Reynolds, to Tara Thornton

The Rattrays are taking revenge on Sookie for preventing them from draining Bill. At this point Sookie is outnumbered and beaten badly on the ground. Sookie is already coughing up blood when Mack Rattray is faced with a phantom too fast to be seen. It hits him and he flies backward into a tree. Something had swooped across the night, picking the Rattrays off Sookie. Hands reach down and pull Sookie into their arms.

At the sheriff's station, Jason watches the end of his sex tape with Maudette Pickens in which he chokes her and runs out when he realizes what he's done. He starts to cry watching it, but the tape keeps playing. Maudette opens her eyes and laughs, calling Jason a moron. He's excited to learn he didn't kill her and suggests it was a vampire.

Bill carries Sookie through the woods to a nearby river to safety. She is in bad shape from the brutal beating and unconscious. Bill insists that Sookie drink his blood or she may not survive her injuries. He bites his wrist and tells her to drink. She asks if it'll make her a vampire. He says no, but to do it if she wants to live. She drinks, lustily.

Jason describes the vampire he saw on Maudette's sex tape, but Jason's tape was the only one the police found. Jason says the vampire was bald, crazy, and tattooed. They admit that they have no other choice but to release Jason because they did not find enough evidence to hold him.

Tara comes home to find her mom, Lettie Mae, passed out on the couch with a gossip magazine. The headline states "Angelina Adopts Vampire Baby". Tara calls Lafayette to come get her. Dawn wakes up to loud knocking on her door. She opens it to a traumatized Jason. He tells Dawn what happened, looking for comfort and sex.

At the riverbank, Sookie awakes to Bill licking the wound on her forehead. Bill asks Sookie again what she is. She tells him she can hear people's thoughts, but not his, and that she finds it peaceful. She proceeds to tell him she doesn't date as hearing a man's thoughts ruins it. She tells Bill only the people closest to her know about her abilities. As he leans in she says she should be getting home. She notices she has completely healed and Bill says that doctors don't know that vampire blood can do that.

At a party, Tara sits on a couch by herself while Lafayette works the crowd. A man named Terrell tries to pick her up, but she makes up a story about her husband being a mercenary just back from Iraq. Meanwhile Jason and Dawn have energetic sex.

Bill and Sookie walk chastely down a moonlit street. He tells her he was made a vampire in 1865 when he was 30 and that he was in the Civil War. She asks him if he'd speak to her grandmother's group. He asks her if it would make her happy to which Sookie replies yes. He asks again to call on her. As she's off work tomorrow, she'll see him just after dark. Bill disappears.

Jason wakes up in bed next to Dawn, who now has her shirt off. He sees bite marks on her chest and isn't happy about it.

Sookie watches a shouting news program between a reverend and a woman from the American Vampire League. Her grandmother comes in and they decide Jesus wouldn't mind if someone was a vampire. Sookie eats sausage, tasting more flavors in it than usual. She describes being able to taste the grass of the farm not realizing it is the vampire blood making her taste buds so sensitive and her grandmother gives her a strange look. Tara comes in, demanding info on her vampire date. Jason also comes in in time to hear Gran's news: a tornado turned over a trailer, the one where the Rattrays lived. They were crushed to death.

Sookie drives over to the trailer. The trailer is demolished. A van pulls up with sheriff Bud Dearborne and coroner Mike Spencer, the one who buried her parents. The sheriff tells her he has heard she didn't like the Rattrays much. He also informs her about the vampire living in the old Compton house across the field from her house and that no one nearby heard a tornado, explaining that tornadoes "hop" from one location to another, while this supposed tornado just destroyed the Rattrays' trailer.

Sookie comes home to her grandmother cleaning. She smells rotten food and finds a tiny crumb under the chair, again through her heightened senses from drinking the vampire blood. Gran tells Sookie that Jason and Tara insisted on coming over that night to meet the vampire, too.

Later Bill sneaks up to Sookie on the porch. She has to invite him in before he can enter. Sookie asks if she withdrew the invitation, Bill would have to leave to which he answers yes. She muses out loud that she would have to keep that in mind. She invites him in. As he greets everyone, Jason stuffs his face and stares him down. Bill talks about where he's from. He says he came back because the last of his Compton line died and he's living in their old place. He says he expects the Vampire Rights Amendment to pass. Jason gives him some vampire prejudice. Tara asks if he owned slaves. He didn't, but his father did.

He charms Gran with stories of the olden days. Bill asks Sookie to go for a walk. Jason tries to forbid her, but Gran shuts him down.

Outside, Sookie tells him she went to the Rattrays' trailer. He says that vampires get stronger over time and learn to cover their tracks. She asks if he ever killed anyone. He admits to doing so but only by accident. He says he fed on the Rattrays because Sookie drank a lot of his blood. She asks what it'll do to her. He says she'll have heightened senses, a stronger libido, and he'll be able to sense her, especially if she's in trouble.

At the house, Tara cozies up to Jason, talking about wanting to be seen and to matter. They snuggle on the couch. Just then, Jason remembers he was supposed to pick up Dawn from work, hastily leaving Tara.

Walking through the Bon Temps graveyard, Bill tells Sookie about glamouring people which is sort of like hypnosis. She wants him to try on her. She goads him into it. He looks deep into her eyes, trying to take hold of her thoughts. She busts up laughing. He has no effect on her and this clearly bothers him for he has never been unable to glamour a human. Usually people are more squeamish about vampires, he says. Sookie rhetorically asks who she is to be squeamish about something out of the ordinary. She flashes back to her childhood, hearing her mom's thoughts as she worries about bills and then getting talked to by a teacher who is resolved to disprove Sookie can read minds.

She hears her mom's anxious thoughts about her, being scared by her. She tells Bill they diagnosed her with ADD. He asks when she lost them. When she was eight, she answers, in a flash flood. He talks about losing his wife Caroline and children after he turned. She quizzes him about his skills. He can't levitate, change form or turn invisible, he says. As they stare deeply at each other, Sookie lets her hair down. He nuzzles her neck and soon they kiss. Suddenly Bill pushes her away, his fangs out. He tries to calm down and says he'd better walk her home.

Jason lays tied up in Dawn's bed as she gets ready for work. He quickly realizes she plans to leave him like that. At the bar, a woman orders another drink from Tara, who tells her off and then talks her way out of wearing a uniform.

Sookie waits on four rude guys who think lewd things. A guy who works on the local road crew, René Lenier, runs them off. Sam asks to talk to Sookie in his office and asks her about reading people's thoughts. He says she should read his sometime. She says she doesn't want to; she's had to quit every job she's ever had because she could read her boss' thoughts. Tara asks Dawn about Jason, in a way that doesn't come across as completely innocent.

Sookie sees something on the news about the anti-vampire reverend Theodore Newlin and his wife having been killed in a car accident. She drives to Bill's house. There's a car with a license plate that says FANGS 1 out front. Two creepy vampires meet her at the door and the bad tattooed guy from the sex tape sneaks up behind her. They bare their fangs and hiss. 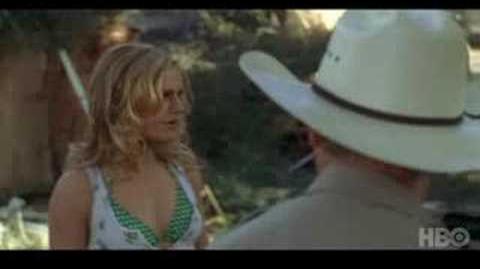 Lafayette Reynolds: "That boy is sex on a stick!"

Bill Compton: "May I ask you a personal question?"
Sookie Stackhouse: "Bill, you were just licking blood out of my head. I don't think it gets much more personal than that."