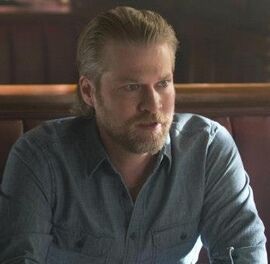 "Your mamma just gets a little crazy sometimes, which means we just have to love her that much harder."
―Terry Bellfleur, to Mikey Bellefleur[src]

Terence Quentin "Terry" Bellefleur was an Iraqi war veteran on the HBO original series True Blood. Played by American starring cast member Todd Lowe, Terry makes his debut on the episode "The First Taste" in the series' first season. Suffering from PTSD and disturbed by actions he took during his service, he worked at Merlotte's as a cook. Initially appearing as a very minor character in the series' first season, Terry returned as a prominent character through the series' second, third, fourth, fifth and sixth seasons. According to Terry's wife Arlene, he had numerous physical scars as well as psychological scars. During the series' sixth season, after he could no longer live with his conscience, he met with a fellow former marine and requested he end his life. While working a day shift at Merlotte's, Terry Bellefleur was shot and killed, thus meeting an untimely demise, on the Season 6 episode "Life Matters". He appears once more, as a ghost, on the episode "Death is Not the End" in the series' seventh, and final, season.

Terry was a hardworking and honest citizen of Bon Temps. He was dismissed as crazy by many town citizens for his social awkwardness. Those close to him however, know he is extremely loyal with a very kind heart.

Terry had a somewhat fragile state of mind and suffered from severe PTSD as a result from his Marine Corps years. The wars he fought had a great impact on Terry, which surfaced most clearly when he was under stress.

Terry was a funny character who tried his hardest to get through life after the war. His awkward personality reflected greatly in his speech, as he would say things bluntly yet shyly that could make him seem like he's a brutally honest person.

As a U.S. Marine Corps veteran, Terry was trained in the use of firearms, hand-to-hand combat, as well as a variety of military strategies. Unencumbered by his PTSD while under Maryann Forrester's control, Terry showed himself to be a natural leader, treating the mob of townspeople as a military unit.

"I never dreamed in my life I could be so happy, thank you for making my life mean something"

"You sure they know that? Cuz they're grilling in the parking lot"

"I ain't worried, I ain't never been so not worried"

"This is what normal people do Sam"