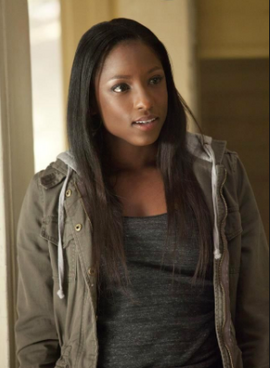 Tara Mae Thornton, briefly known as Toni, was a major character on the HBO original series True Blood. Played by American starring actress Rutina Wesley, Tara debuted on the episode "Strange Love" in the series' first season, and has remained a prominent character throughout the series' second, third, fourth, fifth, and sixth seasons. She met an untimely demise at the start of the series' seventh season, but has remained a main cast member, appearing in visions seen by her mother, Lettie Mae Daniels. Tara was turned into a vampire during the series' fifth season, but, since childhood, she has been telepathic half-fae Sookie Stackhouse's best friend. Cousin to Lafayette Reynolds, and the vampire progeny of Pamela Swynford de Beaufort, Tara is a strong-willed and capable person who has had to contend with a multitude of abuses in her life. She was last seen, in a flashback, in the series' finale episode, "Thank You", at the end of the series' seventh, and final, season.

According to Alan Ball, Tara is the smartest person in Bon Temps, Louisiana, but her cynical nature, born of her abusive background, has made her extremely blunt and often confrontational with others. Tara grew up in a very abusive home with an alcoholic mother, and consequently finds it difficult to fit in with normal society or to trust people. She is very adept at reading people and constantly distances herself from others by speaking her observations candidly and bluntly. She also spends most of her time feeling sorry for herself, and complaining about how unfair her life is. She can also be extremely self centered at times. As a result, she has difficulty holding down a job until she becomes a bartender at Merlotte's. She is, however, fiercely protective of her loved ones (including her best friend Sookie Stackhouse), even to a fault, often hating those who could cause them harm. Anyone who dares to insult Tara had better watch out, because she will gladly let them know exactly where they can stick their unkind words. Aside from her mom, who has caused her much pain over the years, she doesn't take sass from anybody.

After becoming a vampire, she was initially hateful and fearful of her newfound powers. Though she swore she would never forgive Sookie and Lafayette, she turned her vampire life around and made space for acceptance. Initially, Tara hated feeding from humans, considering she was a human only days prior to being turned vampire. However, with Pam's help, she eventually grew to accept that this was the nature of vampires and began to enjoy it. She is now bold and feels empowered. Pam was even surprised when she went to slap Tara, Tara grabbed her hand and told Pam she didn't sign up for the hurt. She sticks up for her maker and friends, even if it means being shot by the new anti-vampire weapon.

By season 6, finale Tara seems to have reconciled with her mother who seems to have entirely changed. Her mother acknowledged abusing Tara since the days her husband left her. Tara appears visibly moved by this and accepts her mother's offer of blood.

At the start of Season 7 Tara is destroyed by a Hep-V Vampire while bravely fighting to protect her mother. During said battle, Tara looked to have had the upper hand early in the fight, but was apparently overpowered. Tara's fate is confirmed in Fire in the Hole as Pam states that she did in fact feel her progeny's passing. 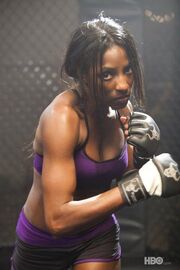 Tara, like her cousin Lafayette, has been said to have some magical potential. While conducting an "exorcism", Miss Jeanette drugged Tara with a harmless hallucinogen that made her see a younger version of herself with blacked out eyes. This characteristic is also shown in humans who were under the spell of the Maenad Maryann Forrester. Maryann later stated that even though the exorcism was fake, Tara summoned her.

Tara has proven to be a skilled fighter numerous times. After drunkenly leaving Merlotte's, Tara finds two men and, in a fit of anger, punches one of them. He falls straight to the ground and as he gets up, Franklin Mott throws him against a car door. He then holds the other man while Tara repeatedly punches him. Later, Tara and Sookie fight and defeat a werewolf in order to escape Russell Edgington's mansion. After finding out that Bill Compton almost drained Sookie dry, Tara kicks him out of a truck and into the sunlight. Tara also used to be a professional cage fighter in New Orleans.

In 2011 Tara returns to Bon Temps after hearing her best friend Sookie returned alive. While home, she joined her cousin Lafayette and his boyfriend Jesus Velasquez at a coven meeting. After reanimating a dead bird and getting willingly possessed by Antonia Gavilán de Logroño, coven leader Marnie Stonebrook gave a drunk Tara a vision. This showed her being raped by a vampire. Antonia proceeded to ask Tara to enlist a group of witches to perform a day-walking spell, in which Tara took part. After being trapped in the Moon Goddess Emporium by Marnie, Holly Cleary convinced Tara to cast a spell to free them from the Emporium. The spell was a success, but Marnie caught them and teleported them back inside the shop.

Tara is seen bearing a revolver pistol loaded with wooden bullets. She seems to be a skilled marksman, as seen in the graveyard battle when she successfully shoots and kills a speeding vampire attacking her from behind. 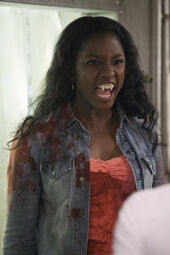 On Halloween night of 2011, Debbie Pelt entered Sookie’s house with the intent to kill her; as Debbie was about to shoot, Tara jumped in the way to save Sookie’s life, mortally wounding herself in the process. Moments later, Pam arrives in search of Eric. Sookie and Lafayette convince her to turn Tara into a vampire in order to save her life. As a vampire, Tara belongs to the Godric vampire bloodline, along with Pam, Eric, Nora and Willa.

Tara now possesses the normal powers and weaknesses of a vampire. ("Turn! Turn! Turn!") Being immortal Tara retains the appearance and health of a young woman. She has an infinite lifespan and cannot die by natural human causes such as disease or old age. She also has superhuman strength, exceptional for her age; though she is weaker than most of her elders.

Tara has proven to be the same strength as Jessica Hamby, a vampire older than her by almost two years. She also proves to be a superior fighter due to her previous skills as a cage fighter. She was able to hold her own against Jessica and throw her across a room with one hand. Tara can move at a blurring speed. Tara's vision has enhanced. She is able to see things in the dark and with more vibrant colors. Tara healed from the gunshot wound to her head after she was turned, and was able to regenerate her entire skin within minutes after burning it off in the sun parlor.

Tara has a high level of self-control for a vampire her age, likely due to her disdain for vampires before being turned. She was able to resist feeding from a helpless girl she found in the woods.

Before the roofing opens up to sun light upon her by the hands of Sarah Newlin, Tara drank from Bill. Drinking the blood of Billith bestowed upon her the ability to Daywalk. She was able to daywalk until Warlow's true death. This event rendered all vampires who previously enjoyed daywalking vulnerable to sunlight again.