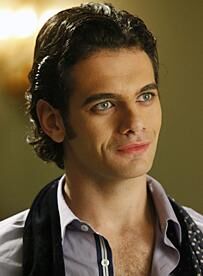 "Excited? Franklin's brains won't wash off the guest linens; I had to bury werewolves under the gazebo, and that Sookie bitch staked Lorena. I've had enough excitement, thank you."
―Talbot Angelis, an ever-concerned homemaker[src]

Talbot Angelis was a vampire on the HBO original series True Blood. Played by Greek co-starring actor Theo Alexander, Talbot makes his debut on the episode "Beautifully Broken" in the series' third season. A royal consort, and the husband of the Vampire King of Mississippi, Russell Edgington, their relationship goes back almost 700 years, when he was also turned into a vampire by Russell. Talbot was of Greek origin, having met Russell when he was a Prince in Byzantium, but while his name is not Greek, it might not necessarily be his birth name. Talbot played a recurring role through the series' third season, and met an untimely demise on the episode "Night on the Sun" in the same season. He appears once more in Russell's hallucination, in the Season 3 episode "I Smell a Rat".

Talbot Angelis was a prince of Greece. He was supposed to be in an arranged marriage because his father was forcing him to be in one, but Talbot ran away from home because he didn't want to deal with this marriage.

He ran across Russell Edgington in an alley-way, while he was feeding on someone. Talbot knew about vampires and he suspected of them being a "myth," but when he met Russell, he knew it was real. Talbot let him feed off of him and Russell fell into a deep infatuation with him (something unusual for Russell, who largely despised humans due to his love of nature and its' law of 'survival of the fittest'). When Russell came across him dying on a battlefield, he turned him so they could spend eternity together.

Talbot was always a "prisoner" in Russell's vast mansion in Jackson, Mississippi, often complaining that Russell 'never took him anywhere'. Russell had suspicions that Talbot was having sex with other male vampires staffing his home. Nonetheless, he did not object to it and made sure that Talbot's lifestyle was always opulent - since Talbot was suspicious and angry that Russell's business as king always kept him away from home. Like Russell, Talbot had an interest in collecting antiques from various eras; he was also obsessive about maintaining the quality of his and Russell's home, and the slightest bit of damage to any part of it would set him off.

When Bill Compton is brought by Russell to the mansion, Talbot shows him to the guest room. ("Beautifully Broken")

After Bill sets Lorena Krasiki on fire during "dinner," Talbot expresses his worry for the damaged antiques. ("It Hurts Me Too")

The next night, after Franklin Mott arrives with Tara, Talbot and Franklin start arguing until Russell returns home and stops the fight. ("9 Crimes")

When Eric Northman comes to Russell's mansion, Talbot entertains him by showing Russell's vast collection of antiques, including a crown that belonged to Eric's father. ("Trouble")

When the house is damaged a second time in a fight between Bill and some bodyguards, Talbot argues with Russell and storms out to his room. After he and Russell reconcile, Talbot flirts with Eric until Russell and Eric prepare to leave for Queen Sophie-Anne's mansion. Talbot becomes upset because Russell never takes him anywhere. ("Hitting the Ground")

A day later, Talbot is displeased with Sophie-Anne moving into the mansion. After Russell leaves to capture Sookie, Eric offers to keep him company. After a game of chess, Talbot declares his boredom, and instructs Eric to take off his clothes so they can have sex.

Eric kills Talbot with a stake through the back into the heart after saying, "Russell took my family. Now I take his." Sensing Talbot's death, Russell leaves Sookie's yard and flies away. ("Night on the Sun")

Completely distraught, Russell puts Talbot's remains in a crystal jar, which he carries with him. ("Everything Is Broken")

The remains are eventually poured down the sink and then shredded by the garbage disposal by Sookie whilst a helpless Russell is being held prisoner and restrained in Fangtasia. ("I Smell a Rat")

Talbot Angelis possessed all abilities common to a vampire.

Male, 20s – 30s. This “intensely beautiful” male vampire has the buff good looks of an underwear model and an acerbic and sarcastic manner. Full of dishy sarcasm and cheerful prattle, he shows Bill around a magnificent mansion where Bill has been “invited” to stay for a spell…STRONG RECURRING (11) THIS ROLE FIRST APPEARS IN EPISODE 3.02