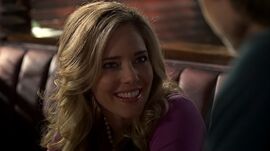 Suzanne McKittrick was a minor character on the HBO original series True Blood. Played by American co-starring actress Christina Moore, Suzanne makes her debut on the episode "She's Not There", at the beginning of the series' fourth season. Playing a recurring role through the series' fourth and fifth seasons, Suzanne was a shapeshifter and was friends with Sam Merlotte and Luna Garza. She is murdered after reconnecting with Sam following his breakup with Luna, meeting an untimely demise in the Season 5 episode "Let's Boot and Rally".

Suzanne attends group sessions with Emory Broome, Sam Merlotte, and Luna Garza. They sit around and discuss their bad tempers, then undress to shift into horses. ("She's Not There")

Suzanne talks about how she once turned into a chicken at an egg farm to protest the mistreatment of animals. ("You Smell Like Dinner")

Emory and Suzanne visit Merlotte's Bar and Grill to see Sam. The shapeshifters ask him why he hasn't been coming around. Sam says that he has been under a lot of stress lately. They beg him to shift and run with them again. Sam says that it is not a good idea because he and Luna aren't on speaking terms. Suzanne reveals that Luna said the same thing, so they chose Sam over her. Sam agrees to meet them later that night.

Sam visits Suzanne and Emory's home and finds them dead. They've both been shot in the head. ("We’ll Meet Again")

Sam involves the police before being attacked himself. ("Let's Boot and Rally")

Suzanne and Emory's murderers are identified as members of The Obamas, an anti-supernatural hate group. ("Everybody Wants to Rule the World")