"Sunset" is the eleventh episode of Season 5 of the HBO original series True Blood, and the series' fifty-ninth episode overall.

Slipping further into religious fervor, Bill gives Jessica an order she's loath to carry out. Armed with a damning video of Russell and Steve, the military delivers an ultimatum to the Authority. Claude and Maurella take Sookie to meet the Faerie Elder, who may know something about an ancient family secret. Alcide reconnects with his father; Sam and Luna hitch a ride into the Authority.

Bill walks through the Authority's underground headquarters, drawn onward by Lilith calling his name. He finally sees her standing in front of the shrine containing her blood. She tells him that there can only be one leader and that she chooses him. She instructs him to drink the entire vial of her blood. Instead he leaves, seemingly unconvinced by her words.

Nora sits in the main chamber, reminiscing about Lilith killing Godric. Salome enters and asks if she's having doubts. Nora tells her she is not doubtful and they discuss Lilith and her divine plan for them. They share a kiss and Nora leaves.

Jessica finds Bill and tells him that she needs to warn Jason that Russell and Steve are after him. Bill rejects her request and explains that he has found Lilith, and that is against Lilith's word for a vampire and a human to be together. Quickly thinking, Jessica tells Bill that she will turn Jason into a vampire so that they can be together, as Lilith would approve. Bill warns her that he is not as naive as she thinks. He sends two of his guards with her to find Jason and ensure that she turns him. Jessica tries unsuccessfully to change his mind.

Eric paces back and forth in his room. Nora enters, they share a passionate moment. Eric tells her that he's going to get them out of there.

Sookie and Jason leave Hot Wings and discuss the vampire that killed their parents as they walk through the faerie's field. Sookie reveals to Jason that the ghost of Warlow told her he was coming for her.

General Cavanaugh of the U.S. Army pays a visit to the Authority. He demands that they tell him where Roman is and why he hasn't been answering calls. He informs them that he knows they bombed the Tru Blood factories and that he has video footage of Russell Edgington and Steve Newlin eviscerating 22 fraternity members. He tells them that if they don't watch themselves, the video will be made public triggering a war between humans and vampires. As he goes to leave, Eric stops him and breaks his neck, killing him.

Jessica finds Jason and asks him if he trusts her. The guards tell Jessica that if she doesn't put him in the ground, they will. Jessica bites Jason and violently sucks his blood.

The Authority members crowd around Cavanaugh's dead body, cursing Eric. Eric and Nora calm them down by telling them that if they act quickly with a glamour squad, they can contain the situation. Nora explains that she knows the Chief of Staff and Salome orders them to go and report back quickly.

Jessica lies next to a still Jason in a grave as her guards begin to bury them. Jessica signals Jason and he suddenly shoots both guards dead with wooden bullets. Jason exclaims he has to warn Sookie about Russell, and Jessica tells him that if she was to spend eternity with anyone, she'd rather it be him.

Pam examines the desk in her office as Tara explains that she's cleaned all of Elijah's blood off of it. Pam warns Tara that the Authority won't be happy about Elijah's murder. Pam explains that the Authority have the power to do anything they want to any vampire. Pam commands Tara not to speak of Elijah ever again and storms out. Pam runs into Jessica in the bar and Jessica pleads for sanctuary. Pam refuses initially, but eventually relents after Jessica tells her that she knows where Eric is.

Shifted from mice, Sam and Luna arrive in the main chamber of the Authority headquarters, wondering where they are.

Maurella and Claude lead Sookie to the Faerie Elder, explaining that due to her old age, it is very hard for her to concentrate on any one topic for very long. Sookie asks the Elder about Warlow and she tells her that her, Warlow, and Sookie's destinies are intertwined. Jason interrupts, shouting for Sookie out in the field. He warns Sookie that Russell is searching for her. The Faerie Elder is horrified that Russell is alive.

At Merlotte's, Holly gives Andy breakfast and tells him she has another surprise: an apology from her two sons. Wade apologizes for putting the nude picture of Andy on Facebook, while Rocky is harsh and unapologetic. Andy tells them that he will treat Holly right, and they share a handshake.

Alcide and Jackson receive an unexpected visit from Robert Rollins, a member of Jackson's old pack. He comes to Jackson's trailer to caution them that baby vamp packs are on the loose. Jackson tells him to get off his land and Robert retaliates by saying that he shouldn't have done what he did and could still be in the pack. Alcide confronts Jackson after Robert leaves and explains that he knows he stole money from the pack leading to his being forced out of the pack.

Arlene and Terry explain to Andy how to make a long term relationship work at Merlotte's. They are interrupted by the arrival of the heavily pregnant Maurella. She tells Andy that he is the father. Andy explains that he'd rather be with someone of the same species even though he accepted her light. She warns that deceiving her and her fairies will lead to war between their kinds.

In the basement of Fangtasia, Tara, Jessica, and Pam discuss Bill and Eric's behavior. Pam believes they have been affected by living in the Authority nest and drinking tainted blood. Jessica and Tara chat, as Jessica asks Tara if she "like" likes Pam because of the way she looks at her. Tara gets defensive and upset that Jessica is getting in her business. Jessica explains that she has no friends, and they make amends, solidifying their bond.

Rosalyn comes to Fangtasia knowing that her progeny Elijah was killed. She attacks Tara and accuses her. Pam claims that she killed Elijah. Rosalyn arrests Pam and takes her to the Authority headquarters. As they are leaving, Rosalyn senses Jessica and takes her in as well.

Bill hears Lilith calling his name and meets her again. She repeats her message that he is the "chosen one" and should drink her blood. This time, he seems to believe her.

Alcide and Jackson defend their neighbors from a trio of young vampires, destroying two of them and driving away the third.

Sam and Luna find Emma caged in her shifter form. They are discovered outside the cell but the guards assume they are escaped human prisoners being used for vampire food. They are locked with the humans in the cell adjacent to Emma. Sam tells Luna to shift, but she says she has to stay with Emma. Sam offers himself to be fed on when the guards come to fetch a meal for Chancellor Bill. As he is being taken to Bill, Pam passes him also being escorted by guards. They are both confused as to why the other is in the Authority HQ and Sam asks Pam to help Luna. Pam then replies with "Who the fuck is Luna?"

Bill enters the inner sanctum, and finds Kibwe praying in front of Lilith's shrine. He explains to Bill that Lilith told him he was the chosen one. Bill kills him, seemingly convinced of his own supremacy.

Jessica returns to the main chamber. Bill yet again tries to persuade her to follow the way of Lilith. She tells him that living in a nest with the Authority has made him go completely crazy. He slaps her across the room.

Salome sees Lilith, where she tells Salome that she is the chosen one; Lilith is conniving to turn the Authority against one another.

Jason leads Russell to the faerie's field. It is then that Sookie reveals that this was a part of their plan. Jason's role was to lead Russell and Steve there so that they could be destroyed. The elder tries to fight Russell, using her photokinesis to throw Steve across the field. She accidentally hits Jason too. However, Russell is too quick for her and drains her. Having consumed her blood, he is able to see into the faeries' sanctuary. He sees Sookie with the faeries and moves to attack them. 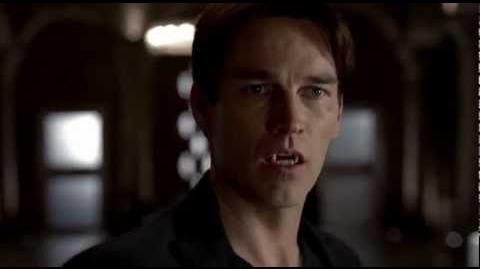 Retrieved from "https://trueblood.fandom.com/wiki/Sunset?oldid=144856"
Community content is available under CC-BY-SA unless otherwise noted.