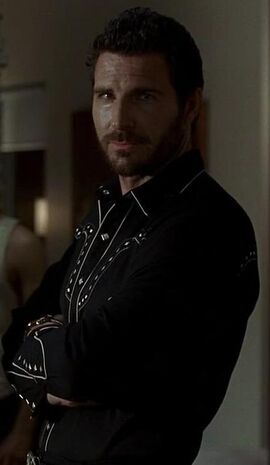 "Anyone who met Stan in the last 300 years knew he had a kink about slaughtering humans."
―Nan Flanagan, about Stan Baker[src]

Stanley "Stan" Baker was an underling and nest mate of Godric on the HBO original series True Blood. Played by American actor Ed Quinn, Stan makes his debut on the episode "Never Let Me Go" in the series' second season. A vampire living in Dallas, Texas, Stan is a recurring character through the same season, and is one of the vampire fatalities during the explosion caused by Luke at Godric’s home. Stan meets an untimely demise in the Season 2 episode "Timebomb".

Stan was a blood thirsty and violent vampire, as such he did not understand why Godric was so sympathetic toward humans. He often acted on impulse, wanting to storm the Fellowship of the Sun and kill all its members despite the bad press it would bring to vampires. Isabel was Stan's opposite. She was less impulsive and more well thought out.

"We'll kill you first. Same way we did your father."
―Stan Baker, to Steve Newlin[src]

Stan started as a pioneer in the 1700s and was a scout in the American Civil War. He chose to become a vampire to give himself an upper hand in the power he craved.

Stan was the leader of a group of rogue vampires who desired direct and violent action against the Fellowship of the Sun. Contrary to Godric's message of peace and tolerance toward humans, Stan and his supporters murdered the church's leader Theodore Newlin, his wife and baby daughter, and made it look like a car accident.

Stan was often seen bickering with Isabel and was even suspected of killing Godric for the control of Area 9 by Eric and Isabel. ("Never Let Me Go")

These suspicions were soon proved wrong when Godric reappeared and told the vampires he let the Fellowship take him willingly. ("Release Me")

During Godric's party at his nest, Stan was killed by Luke McDonald during a suicide bomb explosion. ("Timebomb")

Stan had the common powers and weaknesses of a vampire such as superhuman strength, speed, and healing. Due to his age he was stronger than younger vampires such as Bill but far weaker than older vampires such as Isabel and Godric. 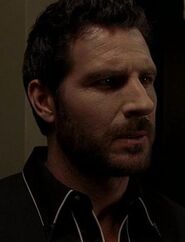 Retrieved from "https://trueblood.fandom.com/wiki/Stan_Baker?oldid=141782"
Community content is available under CC-BY-SA unless otherwise noted.