As the Wiccan-vampire standoff reaches a critical juncture, Sookie summons her faerie powers to prevent Marnie from bewitching Bill, Eric, and Pam into a suicide march, while Jesus casts a secret spell designed to un-bind Antonia and break the witch’s deadly defenses. Sam settles a score with Marcus; Alcide confronts Debbie about her allegiances; Andy finds unexpected passion in the forest; Lafayette is consumed by the past.

Eric, Pam, Bill, and Jessica prepare to blow up Moon Goddess Emporium. Jesus, Lafayette, Sookie, Holly, Tara, and the other Witches are inside. All of them are terrified except for Marnie. She calmly insists that her spell will protect them and jokes about the situation. Her attitude causes Casey to get mad and attack her. Marnie, defending herself, flings a knife at her magically, killing her.

Having had enough of Marnie, Antonia leaves her body. Lafayette, being a medium, is the only one to see this. Marnie uses a binding spell against Antonia. She is unable to resist and Marnie gains control of her.

The Vampires are ready to attack but are interrupted by Jason who explains that Sookie is inside. This prompts Eric and Bill to say "F**kin' Sookie" causing Jason to stand up for his sister. He shows them the protection spell around the Emporium. Eric and Bill try to think of another way to get inside or to disable the spell.

While Eric and Bill are plotting, Jason explains to Jessica that he still feels guilty. She responds by telling him that she doesn't care of how he feels. Suddenly, Kirsch and Duprez attack the other vampires.

Jesus goes to Casey and tells everyone that she still has a pulse. He pleads with Marnie to let him try to heal her. She allows him, and he and Lafayette carry Casey's body to the bathroom. Lafayette realizes that Casey doesn't have a pulse. Jesus explains that he can separate Antonia from Marnie using Casey's recently deceased body.

Bill stakes Duprez, reducing him to the usual pile of gore. He grabs a handful of the former Sheriff, holding it over a subdued Kirsch in an attempt to snap her out of Marnie's mind control. Eric insists that she be killed. Pam pulls Kirsch's "vintage Cartier" jewelry from her neck. A reluctant Bill asks if there is any way to break the conditioning, as was done with Eric. Eric believes that it might be possible. Kirsch professes her loyalty to Antonia. Frustrated, Bill picks Kirsch up and slams her face first into the pavement, then calls for Marnie to break the spell on Kirsch.

Holly and Sookie persuade Marnie to negotiate with the vampires outside. She agrees, as long as Sookie goes with her. Once outside, she gives the "kill the king" command to Kirsch, who once again attacks Bill. Bill throws Kirsch into the force field, where she burns to death (true death). Marnie lets everyone know that the force field is solar-powered. She tells Bill and Eric that she will free Sookie if they kill themselves. They agree, but before they have a chance to, Pam fires a rocket to stop them. The shield stops the rocket, directing the explosion toward those outside the shield. None of the vampires are seriously hurt, but the blast severely burns Jason. Jessica has to feed Jason some of her blood so that he can heal. Furious, Eric berates Pam for attacking Marnie with Sookie standing there, as Sookie could have been killed by the blast.

Marnie and Sookie go back inside. Marnie uses a pool of Casey's blood to scry the present situation outside the shop, then asks to see the future. The pool shows a dead Marnie with a bullet hole in her forehead. Shocked, she tells her coven that they need to band together if they are going to survive the vampire attack (even though she only saw herself killed). Reluctantly, the others join her in a circle, even Sookie. Marnie casts a spell which causes the vampires to walk towards the shield, which will kill them. Jason tries to pull Jessica and Bill away from the shield. He cries to Sookie in his head for her to stop whatever is going on. Using her fairy powers, she breaks the spell, causing Marnie to believe that Sookie is trying to cross her. She causes everyone apart from Sookie to become stuck to the wall, and she creates a fire ring, trying to burn Sookie. Lafayette sees this and he gets Jesus to speed up the process of breaking Antonia out of Marnie's body. He does so, manifesting the demon's head again, with moments to spare. Antonia's spirit casts her own spell, and the fire ring around Sookie dissolves, as does the spell holding everyone to the walls. Marnie cries in despair, seeing her grand scheme falling to pieces.

Outside, the vampires see the protection shield go down. Pam tries to apologize to Eric, saying she knew the rocket wouldn't penetrate the shield. Eric, still pissed, tells Pam to leave before he kills her. Shattered, Pam dashes away. Bill and Eric rush inside Moon Goddess Emporium to kill everyone, but Sookie stops them, telling them that the majority of people in there were being held hostage by Marnie. Bill aims a gun at Marnie but Roy stands in her way, saying they'll have to go through him to get to Marnie. Eric rushes up to him and pulls his heart out, sucking the blood from it like a straw in front of a horrified Marnie. Bill then takes aim at Marnie, who berates Bill saying "Nobody lives forever - not even you!" As the words leave her mouth, Bill shoots Marnie multiple times, including a final shot into her forehead.

Afterward, Eric glamours several people in the area under Bill's orders. Unsure of her feelings and stunned from the recent rescue/attack, Sookie can do little but stand and stare at both Bill and Eric. Jessica goes up to a now-healed Jason, who still claims he can't stop thinking about her, blood or not. He asks Jessica what to do, but she playfully tells him she doesn't know and walks away.

Alcide and Sam are at Marcus' bike shop looking for Marcus, who caused Tommy to be murdered at the hands of his pack. Luna turns up at the bike shop saying that Marcus has taken Emma. Emma eventually calls Luna to tell her that they are at Alcide's house; Debbie and Marcus have slept together.

Marcus tries to persuade Debbie to run away with him and Emma, saying the young girl needs a "proper" mother - a Were, not a Shifter. He even promises to help Debbie break her V habit and give her the child she so desperately wants. Even with all this persuasion, Debbie still says no, citing her love for Alcide even though she believes him to have been unfaithful to her.

After the events of the previous episode, Andy is still wandering in the woods trying to find his way back home. Suddenly, there is a flash of light and a beautiful fairy woman named Maurella appears and, sensing the V still in Andy`s system, she mistakes him for a vampire and attacks. She realizes he is not a vampire and asks if he will protect her "light" which is symbolized by her glowing finger. Andy agrees and their fingertips touch and Andy`s finger seeming absorbs the light from Maurella as the two proceed to make love. Later, Andy eventually finds his way back home where Arlene is worried sick, stating that Terry has gone out looking for him. Andy tells her about Maurella but Arlene tells him it was a hallucination due to V withdrawal. She tells Andy that he has a family who love him very much and goes to call Terry.

Alcide, Sam, and Luna find Emma in the living room. Sam gets Luna to take Emma out of the house so that he and Alcide can take care of Marcus. Alcide bursts into the bedroom where he finds the half-dressed Debbie with Marcus. Sam walks in, carrying a gun, but decides that he should fight Marcus as a man and not with weapons or in a shifted form. Sam beats Marcus to within an inch of his life but lets him go after seriously berating him. Marcus retaliates and picks up Sam's gun. Alcide manages to tackle Marcus to the ground before he has time to shoot anyone. Alcide then kills Marcus with one blow to the neck, breaking his neck and crushing his windpipe. Debbie starts screaming, then calms herself enough to say, "Everything will be alright" but Alcide abjures her.

Lafayette and Jesus lay in bed. Jesus is distraught with the death of Marnie, but Lafayette convinces him that it was for the best and reminds him how many people's lives he saved. Jesus and Lafayette try to sleep but Lafayette opens his eyes and sees Marnie's spirit floating above him. Before he can scream, she possesses him by flying into his open mouth. The now-possessed Lafayette/Marnie smiles quietly to him/herself. 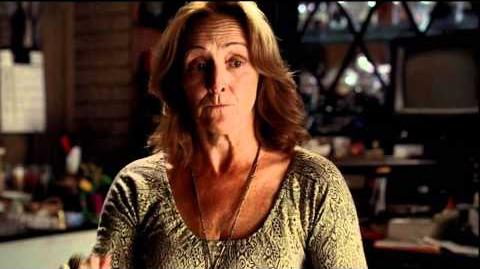 Jason Stackhouse: (to Jessica) "Even without your blood in me, you are all I think about."

Marnie Stonebrook: (to Bill before she is shot) "No one lives forever. Not even you."

Jason Stackhouse: "'Fuckin' Sookie?'"
Pam Swynford De Beaufort: "Yeah, fuckin' Sookie. As usual she's in the god damn way."
Jason Stackhouse: "I don't believe this." (to Eric) "Hey! Sookie picked you up, cold and scared on the side of the road, and opened her home to you."
Eric Northman: "Well, technically it is my home."
Jason Stackhouse: "Fuck you chump! It's her house." (turns to Bill) And you, how many times has Sookie saved your life? Lettin' you drink her blood like it was your own private soda fountain. Now you'd even think about hurtin' her just to settle some score. Are you both FUCKIN' NUTS?!"