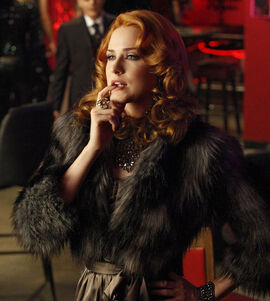 "With all due respect, Mr. Northman, I'm due a lot more respect than that. And I'm sorry to compromise your manhood like this, but hell hath no fury like a vampire queen broke. Move. The. Blood."
―Sophie-Anne Leclerq, to Eric Northman, forcing him to sell V[src]

Sophie-Anne Leclerq was the Vampire Queen of Louisiana on the HBO original series True Blood. Played by American guest starring actress Evan Rachel Wood, Sophie-Anne makes her debut on the episode "Frenzy" in the series' second season. A recurring character through the series' second, third, and fourth seasons, Sophie-Anne is a supporting antagonist who meets an untimely demise in the Season 4 episode "You Smell Like Dinner".

"She's as mad as a monkey on a trike and she has been for centuries! "
―Talbot Angelis, on Sophie-Anne, the "Delightful Eccentric"

Sophie-Anne carries herself quite regally, despite her contrasted enlightened mentality and childish mannerisms. In conversation, she is prone to rambling off on assorted tangents or abruptly changing the subject of discussion, while even sometimes it seems she does not notice being addressed at all. Her pastimes such Yahtzee, lottery scratch tickets, and philosophy also suggest she's extremely self-indulgent.

Despite this personality quirk, she is shown to be not nearly as malicious or prejudiced as other monarchs, such as the king of her neighboring state, Russell Edgington, who outright loathes humans and sees them as inferiors, whilst Sophie-Anne herself doesn't seem to harbor any such animosity or resentment. In fact, given that The Queen has no qualms with playing dice games with them, living with several in her mansion, spending most of her days within her day room, having some as lovers, and even being the only vampire to remind Bill Compton that vampires, too, once began as human - all suggest that Sophie-Anne is pretty tolerant as far as vampires go.

In fact, there is even evidence to suggest that she feels slight envy toward humans, or at the least that she misses the time when she was one. Her motives for obtaining Sookie Stackhouse, so she could "feel the sunlight" on her skin again, as well as having a specific room designed to imitate a daytime beach setting, complete with dioramas outside the windows, all point to this being likely. It is also of note that fairy blood is a dissociative intoxicant to vampires, much as V is to humans. Her mansion is also shown to have a green house on the grounds, which suggests she does indeed have a love for the outdoors and sunny activities. When Eric Northman was attempting to coax information out of her regarding Sookie's origin via draining Hadley Hale, her human lover, the sight visibly pained her greatly, though she remained vigilant in her decision to not reveal the secret, thus proving that she is strong enough in character to sacrifice whatever or whomever she may love for the sake of her ultimate ambitions.

Though she generally displays the persona of an aloof starlet, she also displays signs of an extremely calculating mind beneath the surface, if not just in sheer brilliance in the supernatural world, such as identifying what traits make someone a fairy or being able to surmise how one would kill an unstoppable supernatural immortal creature like a Maenad, but also in how she strategically placed Bill in Sookie's life so as to lure Sookie's fairy blood to her.

Sophie-Anne originally comes from Northern France. Her name used to be Judith. Her maker saved her from a neighbor who was about to sell her for food. However, he soon forced her into prostitution. This lasted a few years. But eventually some humans staked him and dumped his body in the Seine therefore freeing Sophie-Anne. Sophie-Anne, always resourceful went on with her life and soon found an orphan boy named Andre-Paul roaming in the woods. He had also been forced into prostitution. She rescued him and made him a vampire and a companion. He became her personal bodyguard for two centuries.

Sophie-Anne is first seen feeding off Sookie's cousin Hadley. She talks about how disappointed she is in many different things going on in the world and in her life. However, this does not seem to bother her that much; distracting herself with a 1920s issue of Vogue magazine, as well as the "day-room" (including a full diorama of a beach scene complete with the sounds of birds chirping and artificial sunlight) she has had recently built. She has several humans she treats with constantly-varying respect, including Hadley Hale, her main human companion and lover.

When Bill Compton arrives to ask the Queen about how to defeat a Maenad, she shows a great deal of knowledge about them despite not reading up on them recently. She also makes Bill reluctantly spend the entire day lounging with her before she will tell him what she knows. Sophie-Anne orders Eric Northman to get Lafayette Reynolds to sell "V". This order was surprising coming from the Queen herself. The reason for this remains unknown until season 3. ("Frenzy")

At the start of Season 3, Sophie-Anne is seen visiting Eric at Fangtasia, alongside The Magister. They both inform Eric that they suspect a vampire in Her Majesty's kingdom is selling "V" to the humans. Although he suspects it, the Magister is unaware that it is actually the Queen herself that is supplying the V, and Eric who is trafficking it. After The Magister leaves, the Queen tells Eric of her financial woes and her troubles with the IRS, and brutally demands that he move the blood as soon as possible, so that she can get the money. ("Bad Blood")

A few days later she is found by Russell and Eric having bought lottery scratch cards by the hundreds in an attempt to pay off her debt to the IRS.

Russell offers to marry her and absolve her debts. After a little physical coercion from Eric, she agrees to the proposal.

Shortly after accepting Eric picks her up to restrain her so she can't escape. As she is being carried away Sophie-Anne starts to scream for her human lover. She shouts childishly, "Hadley. I want my Hadley... Hadley!". ("I Got a Right to Sing the Blues")

She is quickly caged by Eric within her day room, who then brings Hadley in for the queen. Eric threatens the Queen that unless she tells him why she is interested in Sookie Stackhouse, he will drain Hadley of all her blood. The queen denies knowing anything about Sookie and Eric proceeds to violently feed on Hadley until the girl gives in and tells him what he wants to know. The same night Sophie-Anne accompanies Eric and Russell to Fangtasia where Eric reveals to the Magister that he sold "V" for the queen. Before the Magister can arrest her, Russell announces that he will marry Sophie and pay all her debts to the IRS. Russell then tortures Magister until he performs the marriage ceremony and she watches as the Magister is beheaded. ("Hitting the Ground")

After she is married, she moves into Russell's mansion, along with Hadley. She can be heard complaining that her room is a "fucking closet," as well as not knowing what to do with her large exotic bird collection.

Her whereabouts for some time after this point are unknown, as she is not found in Russell's mansion when human authorities seize it whilst searching for him after his attack on TBBN. Via Nan Flanagan, The Authority considers Queen Sophie-Anne's disappearance as evidence supporting Eric Northman's case, and as such crucial in their decision to allow him to live and to kill Russell. ("Everything Is Broken")

Upon Russell's defeat, Sophie-Anne appears at Bill Compton's residence at his request, dressed in funeral attire, calling herself a widow (implying the Authority did indeed see fit to acknowledge her marriage to Russell, thus making her the new vampire monarch of Mississippi as well.) She is visibly unhappy with Bill's recent defection, but is quick to forget it in lieu of her eagerness for finding a true Fae and being able to walk in the sun. The invite is a ploy, however, as Bill challenges her to a duel to the death. She seems undaunted, revealing that she is over twice his age, but Bill brokenly replies he has nothing left to live for. ("Evil is Going On")

In a flashback by Bill it is revealed that his fight with Sophie-Anne was a setup. Although Sophie-Anne easily overpowered Bill, AVL snipers stormed the Compton home and quickly took aim at Sophie-Anne's heart. After exchanging bitter words, Bill gave the command, and the snipers shot. Upon impact, Sophie-Anne instantly burst into a fine red mist, finally ending her reign. ("You Smell Like Dinner")

Sophie-Anne appears in a brief flashback when Sookie breaks Antonia's curse and Eric recovers his memory.

Later, Nan Flanagan mentions that Bill's indecisive leadership actually makes her long for the days when Sophie-Anne was Queen.

Sophie-Anne has the common powers of a vampire: Superhuman strength, speed, and healing. She has also been shown capable of levitation and, quite possibly, flying to some extent. Because of her age, she is stronger and faster than younger vampires such as Bill, Pam and Lorena, though she is far weaker than older vampires such as Nan Flanagan, Eric Northman and Russell Edgington. It's possible that she lacks self-control because she usually feeds on her court entertainers (notably Hadley and Lutis) and forbids her subjects to never feed from Sookie, and might hate the taste of Tru Blood.

Her weaknesses include a stake to the heart, silver and fire. Sunlight will rapidly kill a vampire of her age. Despite her childish manners, she appears to be very intelligent and has a vast knowledge of history, philosophy and the supernatural world. Eric Northman himself, despite being much older than her, is shown to seek the Queen's advice regarding supernatural creatures like Maenads and, later, was correct in presuming that Sophie-Anne was the sole person privy to Sookie's precise supernatural origin as a fairy.