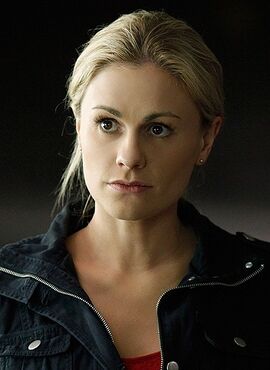 "I just keep thinking that if I make the right choice, all this madness will end and my life will go back to normal. But it's not gonna end, is it? This is it. It's not gonna change. We say goodbye, and the next thing, you guys are back in my house."
―Sookie Stackhouse, to Bill, Eric, and Alcide[src]

Sookie Stackhouse is a Halfling, and the main protagonist of the HBO original series True Blood. Played by Academy Award-winning Canadian Kiwi starring actress, Anna Paquin, and winning a Golden Globe for the role, Sookie makes her debut in the series' premiere episode, "Strange Love", in the series' first season. Playing a prominent recurring role through the series' first, second, third, fourth, fifth, sixth, and seventh seasons, Sookie is a Halfling, or human/faerie hybrid. Her Fae heritage is so extremely diluted, however, that her Faerie powers are limited and finite. The titular character and narrator of The Sookie Stackhouse Novels, the series of books in which True Blood is based, Sookie is descended from Niall Brigant, the King of the original tribe of Fae, and was last seen in the series' finale episode, "Thank You", in the series' seventh, and final season.

In the television series, Canadian-born New Zealand actress Anna Paquin portrays Sookie. In order to portray a Sookie closer to the books, Paquin had to undergo a number of cosmetic changes. Paquin, a natural brunette with fair skin, had to dye her hair blonde for the role so that her hair looked like it would be naturally blonde. Paquin also has to use tanning lotion regularly on her skin so that she has Sookie's sunkissed skin tone. Paquin still differs physically from the book Sookie as she has brown eyes instead of blue and is noticeably slimmer than her book counterpart.

As a telepath, Sookie must constantly cope with hearing people's thoughts due to her being half fairy. She can hear their darkest secrets—without wanting to—and so is a little awkward around people. Her telepathy makes it very difficult for her to form relationships with people, who are uncomfortable with someone who can hear their thoughts. For this reason, she had lost every single job she ever had before being hired at Merlotte's Bar and Grill. Through constant concentration, however, she has trained herself to block out people's thoughts when she wants to and turn a blind eye, but her ability to concentrate is greatly diminished when she is emotional or drunk. Sookie exhibits the down-home kindness known as Southern hospitality that is stereotypical of the South, and she is usually willing to help someone in need. Although Sookie is kind, she never hesitates to stand up for herself and her beliefs, even when face-to-face with an angry vampire or her best friend. Sookie is loyal to her friends, but when a friend does not return that loyalty she is deeply hurt. Sookie has a fervent belief in God, but has not professed any particular faith or religion, although she is presumed to be some denomination of Christian. Because of her telepathic abilities, she has gained notoriety in her small town of Bon Temps, and is often looked upon as the local oddity. Because of this slight ostracism, Sookie displays a progressive attitude toward other social outcasts, like the LGBT community and vampires.

Many people in her life view Sookie as an innocent, immature, and vulnerable woman who needs to be protected like both Bill and Sam for example, but she believes herself to be perfectly capable of taking care of herself. Some negatives include her naivete and gullibility; this is partly due to her quiet, sheltered life in a small town and her trusting disposition. She can be quite blunt and sarcastic. Sookie has a natural (and deadly) appreciation and curiosity with vampires, primarily because she cannot hear their thoughts and does not have to make a constant effort to block them out. However, her affinity for vampires often puts her and her loved ones into harm's way. Vampires are instantly attracted to her because she is Fae, and she emits a delicious aroma that only vampires can smell. However, since she is an extremely diluted Halfling, this scent is nowhere near as strong as with purer Halflings, like Adilyn.

Sookie is a Halfling, which is a human/Faerie hybrid. However, her Fae heritage is so extremely diluted that her Faerie powers are limited and finite. Like all Faeries, she has the power of telepathy, which has made her a social pariah in her small town of Bon Temps. ("Strange Love") Her telepathy gives her the ability to hear and see the thoughts and memories of living humanoids. Since vampires are technically dead, they have no brainwaves, and although they think, their thoughts cannot be heard. ("Mine") Her telepathy also allows her to dig deeper into people's minds through touch. She can force memories to be revealed, and can even recover glamoured memories. ("Let's Boot and Rally")

She also has the power of photokinesis, which manifests as a glowing blue-and-white light that emits from her hands. This light is harnessed through nature and by her own will, but it takes practice. Faeries are not born with the innate ability to harness their light; Sookie discovered her light spontaneously when she defended herself against the Maenad Maryann. ("New World in My View") Her light can be used as a weapon against attackers, as well as to cross into alternate dimensions. ("Evil is Going On") Due to her royal lineage, her light can also be harnessed into a single ball of energy "that when released, can go supernova killing any vampire it touches." (If taken literally, however, it would probably also destroy the entire Solar System.) ("The Sun") Her light can also have unexpected results. She used her light to break up a fight between the vampires Bill and Eric, the latter of whom was under a spell cast by the witch/necromancer Marnie/Antonia. The light somehow broke the spell and gave Eric back his free will. ("Burning Down the House") Because of her diluted heritage, her light is finite and will eventually extinguish for good. When this happens, she will no longer be a Faerie. ("In the Beginning")

Like all Faeries, Sookie emits a delicious aroma that only vampires can smell, making her very attractive to them. ("Mine") Her blood has no identifiable blood type, and also gives vampires the temporary ability to day walk ("Hitting the Ground") and to cross into Fae dimensions. ("Everything Is Broken") However, because her Fae heritage is so diluted, her scent is nowhere near as strong as full Faeries ("Whatever I Am, You Made Me") or purer Halflings, -- like the Bellefleur sisters ("At Last") -- and the ability to day walk wears off within mere minutes. ("Hitting the Ground")

Because Faeries "naturally adjust to the standard of beauty" in the dimension they are in, Sookie, her brother Jason, and her cousin Hadley have all inherited physical attributes that make them exceptionally attractive, in accordance with human standards. ("Hopeless")

Unlike full Faeries and purer Halflings, Sookie ages at the same rate as regular humans. ("Who Are You, Really?") While her blood is more delicious than regular humans, ("I Smell a Rat") it does not have an intoxicating effect on vampires, as does full Faerie blood or purer Halfling blood. ("I'm Alive and on Fire") She does not have the ability to teleport ("Who Are You, Really?") and apparently cannot perform psychometry (channeling past events) without the help of another powerful Faerie, such as Niall Brigant. ("May Be the Last Time")