Somebody That I Used to Know

"Somebody That I Used to Know" is the eighth episode of Season 5 of the HBO original series True Blood, and the series' fifty-sixth episode overall. This episode was directed by Bill Compton actor Stephen Moyer.

At Authority headquarters, the Chancellors revel in the afterglow of recent events; Eric gets a message from Godric; Bill is shaken by a distant memory. Helped by Claude and his sisters, Sookie and Jason visit the site of their parents' deaths, with shocking results. An emotional Luna tries to walk in Sam's shoes. Hoyt's new pals bring him a present; Lafayette leads a séance to purge a curse; J.D. ups the stakes of his fight with Alcide.

"We were in the presence of God."
― Bill Compton, to Eric Northman

Sam calms down a furious Luna at the hospital; she wants to go after the people trying to kill them, but Sam assures her the best course of action is for her to rest. After Sam leaves Luna shifts into Sam's form, and then falls over.

The vampires' crazy night comes to an end. They return to the headquarters, with the majority of them still high and reveling in drinking Lilith's blood. Eric, who has sobered up, turns to Bill and asks him what the hell just happened. Bill mentions seeing Lilith. Eric isn't so sure, attributing what they saw to being high.

Jason finds Sookie trying to use up all of her faerie light. She's tired of being a freak. He sits her down and talks about how her powers could help them down the road, particularly when it comes to learning about their parents.

Luna, who still looks like Sam, steals some clothes from a patient and leaves the hospital.

A man seduces Jessica at the bar and the two leave together.

The vampires evaluate their evening. Russell says he feels "born again" and the rest of the group believes this is the beginning of a new way of life. Eric isn't completely on board, saying, “I think I've had enough fun for one night”; he asks Bill if he is coming. Bill shakes his head. Subtly disappointed, Eric leaves the room.

Alcide and Rikki have sex; they seem to be moving toward a romantic relationship, rather than that of an Alpha/Second.

Salome wants Bill to feed from a woman with her. Bill who is initially uncomfortable says he's not hungry, but that doesn't work. She asks why he never made his family like him and Bill flashes back to his daughter begging him to save her on her deathbed. Bill says no, telling her that "immortality is a curse". At first, Bill is horrified about hurting the woman as she admits she has children of her own, but then eventually he caves in and starts to feed on the woman.

Hoyt is brought to a remote compound by his new redneck buddies. They show him that they've captured Jessica. They want him to kill her with some silver and wooden bullets. They lock him in a room with her and refuse to open the door until he kills her.

Sookie and Jason go to the faerie club Hot Wings for aid in finding out which vampire killed their parents. The Crane faeries, Claude and his sisters agree to meet the following day at the bridge where their parents were killed.

On his way home in Jesus' car, Lafayette uses some V to heal his lips. He sees Jesus sitting next to him in the car and they hold hands.

Joe Bob, the member of the anti-supernatural group that Andy has in custody, isn't talking. Sam asks if he can try interrogating him. Sam turns himself into a cobra and learns that they have Jessica. Luna/Sam arrives at the station and tells Sam she doesn't know what happened and can't shift back.

At the bridge the faeries tell Sookie to attempt to connect with her mother the night she was killed to help them figure out who was responsible. She becomes her mother, watching as a vampire breaks into the car and kills her father, Corbett. But then she starts seeing the event from the vampire's point of view, as he kills her mother and then finds the band-aid with Sookie's blood in the backseat. Claudine shows up and drives the vampire away. Sookie is knocked off her feet (as the vampire was) and the vision ends.

Hoyt asks Jessica why she stopped loving him. She says she wanted to love him, even going so far as to pray that the feelings would return, but it just never happened. The lone member of the group still watching them hears a shot from the room. He unlocks the door and Jessica breaks his neck. Since it's daylight Jessica can't leave, so Hoyt goes for help. Before he leaves, she thanks him for saving her, but he responds with "Fuck you Jess."

Lafayette returns home, interested only in a bath and a blunt. He finds Arlene and Holly waiting for him, wanting him to help them with Terry's curse. Lafayette says he'll do it for $300.

Sam, Andy, and Luna arrive at the compound and find Jessica. Sam and Luna smell a human woman. Jessica is surprised Hoyt's not the reason they are there.

The faeries are upset that Sookie has psychically bonded with the vampire. Sookie recalls that Claudine knew the vampire, calling him "Warlow".

An old acquaintance of Tara's named Tracy sits at the bar. She's ignorant and racist and Tara does not have any patience for her. Eventually Pam zips over and scolds Tara for not treating the customers better. Tracy gets even more nasty before walking away.

Eric tries to convince Nora that her mind is clouded and mentions seeing Godric. She says negative things about Godric and Eric is furious, he attempts to kill her but stops himself. Utterly heartbroken, Eric leaves. Nora says that she thinks Lilith will be able to show Eric the way.

Sam sits with a terrified Luna on his lap. He's able to turn her back to Luna by giving her a kiss on the forehead.

Pam brings Tara downstairs to show her Tracy in custody. She glamours Tracy and makes her want to be fed upon. Tara then feeds on Tracy.

J.D. and Alcide fight in the woods. J.D. gets the upper hand and is about to kill Alcide when the rest of the pack arrive on the scene. Martha convinces him not to kill Alcide, but J.D. tells Alcide to find another pack.

Lafayette agrees to attempt to get rid of Terry and Patrick's curse. He goes through the motions at first, but then the Iraqi woman actually makes an appearance. Lafayette tells the soldiers that she is still furious and the only way to break the curse is for one of them to die. Patrick jumps up and runs off.

Hoyt is slowly making his way back to civilization. A car pulls up alongside him and the driver sticks a gun in his face.

Warlow appears to Sookie in a vision. He says he's coming for her and "you are mine."

At a meeting of the new vampire hierarchy they decide how to start flexing their muscles. It is suggested they simply start killing mainstreaming vampires, but Bill thinks a better move would be destroying the Tru Blood factories. Eric, completely shocked, asks Bill what he's doing: Bill coldly replies "Evolving." 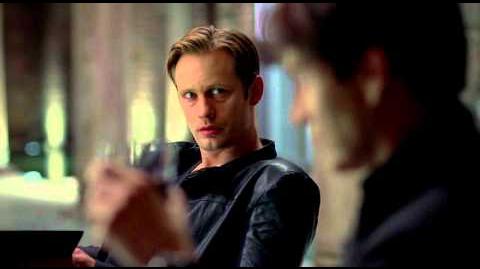 Pamela Swynford de Beaufort: "You don't know me that well. My mad face and my happy face are the same."

Russell Edgington: "God has the most beautiful tits I have ever seen."

Sookie Stackhouse: "You don't know what it's like to be standing in line at the bank and hear the guy behind you and how he wants to suck your toes."

Sookie Stackhouse - "Jason! Are you OK?"
Jason Stackhouse - "I'm fine, you got me in the head."
Claudine - "Warlow! Leave the girl alone!"
Eric Northman - "We were high as fucking kites."