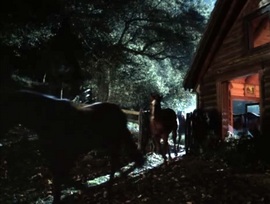 Shapeshifters are a supernatural species of humans born with the ability to physically assume the form of any animal. On the HBO original series True Blood, they are a branch of the Were variety, which includes werewolves and werepanthers. Unlike vampires, the existence of shapeshifters is not public knowledge.

Shapeshifters are usually referred to as just "shifters," despite the fact that both werewolves and werepanthers also shift into their alternate forms.

A shapeshifter has the ability to take the form of any animal. To do so, the shifter must first mentally observe the animal's form in specific detail, a process known as imprinting. Apparently, a shifter needs to do this only once, and that animal's form can be assumed at will without the need to repeat the imprinting process.

Shifters typically find some animals easier to shift into than others. They usually have one particular animal that requires little effort or thought for shifting, which is known as a "go-to shift." Shifters tend to assume characteristics of their go-to shifts in their human form. For example, Sam Merlotte's go-to shift is a collie; as a result, he has a heightened sense of smell in his human form, and sometimes barks in his sleep.

Shapeshifters cannot assume the form of other humanoids unless they have caused the death of another shapeshifter. The ability to shift into humanoids is called skinwalking, and the imprinting process is so complex and taxing on their bodies that it can ravage their internal organs to the point of vomiting or even death.

Shapeshifters generally keep their identities secret and fear exposure from the human public. Biologically and socially, they are practically indistinguishable from regular humans. They are not immortal, and their rate of aging and expected life span is the same as humans. They have the same needs and weaknesses as humans. One particular characteristic of shifters is the urge to run and play in open, isolated places with other shifters or animals while assuming animal form. As with all Weres, shapeshifting is hereditary. An individual must be born a shifter, inheriting his or her status from one or both parents. They are able to reproduce with humans and other Weres; the species of the offspring of these disparate couplings occurs randomly. Shapeshifters do not posses the ability to shift from birth; this generally occurs spontaneously at some point in their youth under the force of a full moon.

As with all Weres, shapeshifters can shift at will, except during the nights of the full moon, the force of which causes them to shift against their will, usually to their "go to shift". However, if they fall asleep, become unconscious in animal form or, on nights of the full moon, the full moon faze passes, they will shift back into human form. In the Were hierarchy, they are considered to be the more intelligent and humane than "vicious" Weres. They are however physically weaker than Werewolves with their strength being equivalent with regular humans.

Known Shifters (and their go-to shifts)

Tommy as a gator

Sam as a Collie

Sam and fellow shapeshifters as horses.

Sam as a Pitbull

Sam as a dog and Daphne as a pig