"Scratches" is the third episode of Season 2 of the HBO original series True Blood, and the series' fifteenth episode overall.

An outraged Bill tells Sookie in no uncertain terms that she committed a grave error in letting Jessica visit her family. Hurt and upset, Sookie decides to walk the 20 miles home but doesn't get very far when she is attacked by a half-bull, half-man beast leaving huge gashes on her back. When his blood is unable to revive her, Bill turns to Eric for assistance and it's determined she has somehow been poisoned. Both of them are puzzled however by the beast that attacked her and have no idea what they may be up against. Once recovered, Sookie makes a deal for Lafayette's release. Maryann throws a big party but it's all a little too wild for Tara. Sam Merlotte wants to pack it in for a while and leave town. Wild child Jessica goes to Merlotte's bar where she meets Hoyt Fortenberry and they immediately hit it off. New waitress Daphne decides to go for a midnight swim with Sam and reveals something quite interesting.

After glamouring Jessica’s family and beginning the drive back to Bon Temps, Bill and Sookie argue fiercely about the night’s events and Sookie storms out of the car. As she walks off, she is hunted down by a mysterious clawed creature with the head of a bull and the body of a human. It reaches her and viciously slashes her back thus leaving her paralyzed and poisoned. Bill rushes to Eric for help and, with the assistance of a woman named Dr. Ludwig, Sookie is saved. Eric then sends Pam and Chow to the woods to find out what attacked Sookie and when they return, they tell him that it left human tracks but its smell was that of a beast.

At the Light of Day camp, Jason confesses his true feelings about vampires and bonds further with Sarah when he lets out some of his grief over his Gran and Amy's deaths. She reveals to him that she used to be a vampire sympathizer but now suspects they murdered her sister, Amber Mills. At Merlotte's, Jessica and Hoyt take a special interest in one another. Sam warns Tara to stay away from Maryann. Later, after snapping at Daphne, Sam decides to take off for a while.

At Fangtasia, Sookie takes Bill’s blood to heal and then discovers that Lafayette has been held in the basement. She manages to arrange for his freedom in exchange for helping locate the missing vampire Godric in Dallas, Texas.

Tara and Eggs' relationship hits a rough patch at one of Maryann’s parties when the guests become strangely sexual with one another, including Eggs and another girl. Bill and Sookie walk in on Jessica and Hoyt making out. Sam and Daphne make peace with one another. The episode ends with the revelation that Daphne's back appears to have deep scratches much like the ones Sookie got when the creature attacked her. 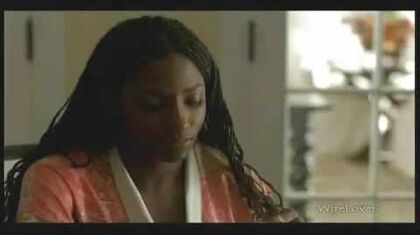 America's Next Top Model is a reality show that was created by Tyra Banks and premiered in 2003. The show is a modeling competition where young women go through various challenges and photo shoots. Each week one contestant is eliminated (sometimes more than one or none are eliminated). The last one standing receives a variety of prizes including a modeling contract and a photo spread in a magazine.

Oddly enough, although there have been contestants who have nose rings, there has never been an instance where a contestant got that piercing during the show.

Eric Northman: "It's always a pleasure doing business with you, Dr. Ludwig."
Dr. Ludwig: "F*** OFF!"