"Save Yourself" is the twelfth and final episode of Season 5 of the HBO original series True Blood, and the series' sixtieth episode overall. It was written by departing show runner Alan Ball and directed by Michael Lehmann.

Eric embarks on a final, desperate mission to overthrow the Authority – and save Bill from losing his humanity. Andy faces the consequences of the light pact he made; Alcide readies for a second showdown with J.D.; Sam and Luna test their limits in trying to escape the Authority. The Fay try to prevent Russell from entering their sanctuary.

"What is that amazing smell?"
― Nora Gainsborough

Having drained the Faerie Elder, Russell can see the fae hideout and moves to attack. The Faeries use their combined power to hold him back. Sookie has to pause several times as her dwindling powers leave her and she is unable to sustain the attack. Russell's advance is slowed by their blasts, but he believes that their light has no further effect on him. As the Faeries continue their attempt to keep him at bay, Russell is ambushed by Eric just as he is about to enter the nightclub. Eric takes advantage of the situation and manages to stake Russell, bringing him the True Death, satisfying a long held lust for revenge. Steve looks on in horror as his boyfriend is staked and then runs off into the woods.

Sookie rushes to help Jason and Nora finds herself drawn to Sookie's blood. Eric stops Nora and makes her swear not to touch Sookie. Jason is groggy from a head injury, but alive.

Sam is brought to Bill in the Authority Headquarters as food. He escapes by shifting into a fly. He goes back to Luna and Emma to plan their escape. Bill gathers the V-Feds and orders them to search for Sam, furious about the security breach. Bill admits to Salome that he killed Kibwe after she questions his whereabouts. He lies to Salome that Lilith appeared to him and pronounced her as the chosen one and claims that he will serve her.

Maurella visits Merlotte's and asks Andy for salt. She downs a whole shaker as he tries to explain their affair to Holly. Maurella's light breaks and she goes into labor.

Alcide is talking with his father when Martha brings Rikki to the trailer. She has been forced to drink a massive amount of V. Jackson gives her a colloidal silver remedy to force the blood out. Alcide wants to fight J.D. again to oust him as packmaster. His father suggests that they even the playing field by drinking his stash of high quality V.

Jason hallucinates that he is seeing his parents urging him to hate vampires. Eric arrives with Tara and Nora asking for Sookie's help to save Bill. Eric says that she is the only one that can get through to Bill. Sookie agrees to help them to infiltrate the Authority. They arm themselves with weapons from the Stake House.

Sam finds Steve's room and convinces Luna to skinwalk as Steve so that they can take Emma back. Luna takes Steve's form but Rosalyn collars her and takes her to make a live television announcement regarding the footage of Steve and Russell killing 22 fraternity brothers. Half way through the interview Luna shifts back into her real form on camera, revealing the existence of shifters to the world. Rosalyn prepares to attack but Sam, already shifted into fly form, swoops into Rosalyn's mouth and destroys her by shifting back into his human form inside of her.

Arlene, Lafayette, and Jane Bodehouse watch as Holly is forced to midwife while Maurella gives birth to four baby girls. She quickly leaves, instructing Andy to take care of their children and make sure at least two survive into adulthood. Holly, shocked, calls Andy a dick.

Eric arrives at the Authority and kills every vampire that approaches him. Jason revels in the violence against vampires, killing many himself. Salome is about to drink the Blood of Lilith, but hearing the alarm, she flees to her chamber. Nora and Eric disarm the building's security system and release the prisoners. Pam passionately kisses Tara as they are reunited.

The Shreveport werewolf pack torture a captured vampire and drain his blood. Alcide, Jackson, and Martha confront them. J.D. tells Alcide that he is abjured but Alcide attacks and beats him to death while the pack looks on. With J.D. dead, Alcide pronounces himself packmaster and lays down the law to his pack.

Jessica is thrilled to see Jason and professes her love for him. He rejects her because she is a vampire. Eric sends most of the group in the elevator, warning them to expect more guards, then takes Sookie to find Bill.

Bill urges Salome to drink Lilith's blood, but she finds it poisoned. Bill reveals that he refilled it with blood infused with silver, keeping the original blood for himself. Before he stakes (true death) her, Salome tells him that "Lilith chose wisely." Bill prepares to drink Lilith's blood but is interrupted by Eric and Sookie. Sookie urges Bill to come back to his old self.

Having grown tired of his old life and always apologizing for being a vampire, Bill refuses. He claims to have no real feelings for Sookie. He drinks the blood of Lilith. He begins to bleed from the eyes and mouth and then appears to be destroyed; leaving a puddle of blood behind. Sookie is devastated and Eric comforts her as she breaks down.

Bill rises again from the pool of his remains, coated in blood like Lilith and baring sharper, longer, fangs. Eric yells at Sookie to run. As they flee, Bill growls demonically. 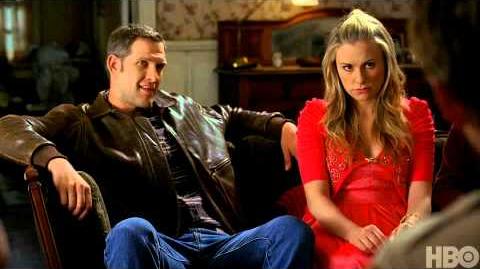 Eric Northman: (after staking Russell) "Well, that felt even better than I thought it would."

Sookie Stackhouse: "Bill, this isn't you."
Bill Compton: "What the fuck do you know about me? For all you know everything I did while with you was an act. Calculated to elicit a particular response."
Sookie Stackhouse: "I know that's not true."
Bill Compton: "Why? Because the light you bear? Did you ever consider the possibility that it's a handicap? One that blinds you to the most obvious of truths? That you are an abomination. Just like the Vampire Bible states."

Holly Cleary: "I cannot believe I am midwifing for your pregnant girlfriend! That I just find out about!"
Andy Bellefleur: "Believe me I prefer this was not happening just as much as you."
Holly Cleary: "Okay, we're almost there honey, okay, just keep breathing."
Maurella: "Oh! Yes! YES! Yes! YES!"
Holly Cleary: "This doesn't, uh, seem too hard for you, I guess this isn't your first pregnancy?"
Maurella: "Seventy Three times since I first discovered how."