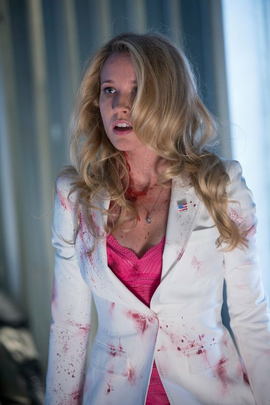 "I must die. So I may return to fulfill the prophecy. It's been the plan all along, that I must die for all our sins. But I will return as the princess of peace... the messiah."
―Sarah Newlin[src]

Sarah Newlin (née Crabtree) is a recurring character on the HBO original series True Blood. Played by American co-starring actress Anna Camp, Sarah makes her debut on the episode "Nothing but the Blood" at the beginning of the series' second season. Ex-wife of Fellowship of the Sun televangelist Steve Newlin, their marriage eventually falls apart. She had a brief affair with Jason Stackhouse, believing it was a sign from God for them to get together. By 2009, Sarah had masterminded a Vampire concentration camp and the systematic extermination of the vampire race, seeking a career in politics as well. With Governor Burrell's untimely demise, it appears that she is the "tyrant" of which Lilith speaks. After Hep-V spreads, she goes into hiding under the alias "Noomi". Her blood is the cure for Hep-V, and she is eventually caught and locked in the basement of the vampire nightclub Fangtasia where she remains today. Playing a recurring role through the series' second, sixth, and seventh seasons, Sarah was the main antagonist of the series' sixth and seventh seasons, and was last seen in the series' finale episode, "Thank You", in the series' seventh, and final, season.

Sarah is a slender blonde. She often wears bright colors to showcase her supposedly "sweet and gentle" personality, though it is ironically the polar opposite of what she thinks it is. She dresses modestly to give off a mature and well-mannered religious, southern woman feel.

At first impression Sarah is a very warm and kind person. When vampires first came out of the coffin, she and her sister marched up to Washington to promote their equal rights. She changed her mind however, after her sister disappeared at the hands of the same vampires they were trying to help. She has since expressed a deep hate for vampires completely opposed her former personality.

Towards non vampires Sarah remains a warm and kind individual. She expresses concern for others well-being and has never been a great supporter of violence (even towards sympathizers of vampires).

Sarah has also shown a great capability of leadership and organizing talent. When running the Fellowship of the Sun, Sarah was the main person dealing with everyday businesses while her husband, Steve Newlin, was advocating their cause.

In her time of rising through the political spectrum, Sarah has become corrupted with power. A devoted Christian, she believes that the cruelties committed against vampires, as well as the madness that surrounds her, are all God's plan to save the human race by annihilating the vampire race. She is also mentally-unstable, as she was seen talking to and even kissing Burrell's decapitated head as if he were alive. She later brutally killed Ms. Suzuki and praised Jesus after doing so.

Later upon her escape from the facility and being forced to live on the run from both law enforcement and the Yakuza that she had betrayed and being further pursued by Eric and Pam, Sarah seemed to have become paranoid, delusional and desperate, and has developed an apparent identity crisis as she converted from Christianity into Buddhism and changed her name to "Noomi" in an attempt to both hide from her various enemies and her actions. This seemed to have also assisted her with her attempts at self denial as she has even begun, to see "Sarah" and "Noomi" as almost as two separate people to hide from her guilt. However her mind eventually began hitting its breaking point after the deaths of her mother, father and sister due to their attempts to protect her and eventually leading her to begin manifesting the full culminations of her guilt in the form of highly realistic hallucinations of all the men she has slept with that begun forcing and taunting her to face her mistakes. Eventually the full extent of her mental instability culminated in her developing a full blown Messiah-Complex, due to her blood containing the cure for Hepatitis V, the very same virus she created In order to justify herself and convince herself that she wasn't evil or that all of her awful decisions that lead her through actions to be wrong.

As seen in the finale, Sarah has now become a complete shell of who she once was as she began being used by Pam to make millions by selling her blood, as seen where she is now shown to be constantly sullen and miserable. She is shown to still suffer from highly realistic hallucinations of her ex-husband who is shown to still torment her for her situation. By the time of the end, Sarah was shown to have become nihilistic.

Little is known about Sarah's family life, her only known family member is her sister, Amber. When vampires first made their existence public, Sarah and her sister marched on Washington to advocate for vampire civil rights. Months later Sarah's sister, Amber, disappeared: she had become hooked on V and the vampires had taken her. She also used to be a vegetarian during her pro-vampire days.

Sarah's opinion of vampires completely changed after her traumatic discovery. Sometime later, whilst working in a hospice, she met Steve Newlin whose father ran the Fellowship Of The Sun church and who was working on destroying the vampire race. Steve and Sarah married, and after her father-in-law's death, the newlywed couple ran the church.

On a show named "Sunday Morning with McCafferty", that hosts a debate about the "Vampire Rights Amendment", it is revealed that the Steve Newlin is divorcing Sarah and is under scrutiny by the IRS. ("I Got a Right to Sing the Blues")