watch 01:56
'True Blood' Profile: Sam Merlotte
Do you like this video?
Play Sound 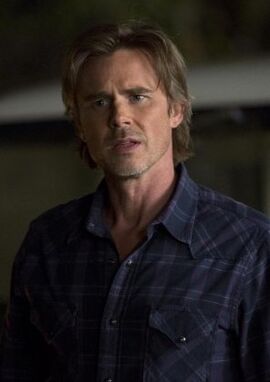 "Andy, if you don’t stop fuckin’ with me, I’ll turn into a doberman and bite off your face!"
―Sam[src]

Sam Merlotte is a shapeshifter on the HBO original series True Blood. Played by American starring actor Sam Trammell, Sam makes his debut in the series' premiere episode, "Strange Love", in the series' first season. Former owner of the nightclub Merlotte's Bar and Grill, in Bon Temps, Louisiana, Sam plays a recurring role through the series' first, second, third, fourth, fifth, sixth, and seventh seasons, and is now currently mayor of Bon Temps. Possessing a "go-to" shift of a light-colored border collie, Sam was last seen in the series' finale episode, "Thank You", in the series' seventh, and final, season.

Though he has a rough past, Sam grew up to be a kind person. He's responsible, compassionate and generous. He's as loyal as a dog. He is a protective person who likes to keep an eye on those he cares about, though he does his best not to seem over-bearing. His friendly and easygoing nature helps him get along with nearly everyone. Despite his kindness and thoughtful nature, he does have anger management problems, which seem to be common among Shifters. His temper issues grow more volatile as the show progresses, but he's recently been managing to mellow out despite all the emotional trauma he's been facing.

In his early 30's, he is of average height and strong build, with gray eyes and shaggy brown hair, much in line with his alternate form. While he can change into any animal (so long as there is a suitable 'template' animal around for him to use as a basis), Sam's preferred alternate shape is that of a border collie.

Retrieved from "https://trueblood.fandom.com/wiki/Sam_Merlotte?oldid=145251"
Community content is available under CC-BY-SA unless otherwise noted.