Start a Wiki
watch 02:09
'True Blood' Profile: Russell Edgington
Do you like this video? 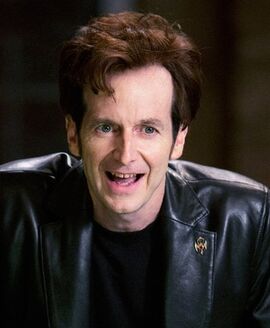 "Peace is for pussies!"
―Russell Edgington[src]

Russell Edgington is a major character on the HBO original series True Blood. Played by American starring actor Denis O'Hare, Russell makes his debut on the episode "Beautifully Broken" in the series' third season. The former Vampire King of Mississippi, an almost 3,000 year old, ancient vampire who was formerly a Chancellor of the newly reformed Vampire Authority, Russell was the main antagonist through the series' third season, and a recurring character through the series' third and fifth seasons. Considered by many to be the oldest, and most powerful vampire in existence, as well as the craziest, Russell met an untimely demise on the episode "Save Yourself", at the end of the series' fifth season.

"Why would we seek equal rights? You are not our equals."
―Russell Edgington, to the American people.[src]

Russell appears to be charming and polite, but that facade can be easily broken, revealing him to be manipulative and almost Machiavellian. He occasionally speaks in an ancient Celt language, denoting his origins. He also cursed to Sookie in German. He believes humans have squandered the Earth and believes in protecting the environment of vampires.

After the death of his consort and progeny, Talbot, Russell's sanity ebbs. He speaks to an urn containing Talbot's remains. His actions seem much more erratic than before, and he goes as far as interrupting a newscast, after brutally killing the newscaster. He is entirely focused upon revenge on the Authority, the American Vampire League, and more importantly, those who have taken Talbot away from him.

"Why would a vampire want to glamour me? Or dig a hole in a damn parking garage?"
―Doug, to Alcide Herveaux[src]

On Halloween 2009 Alcide receives a call from Doug, one of the employees of his construction company, informing him that the parking garage that had been erected over Russell's resting place had been vandalized. Alcide questions Doug as to when the damage occurred, but the man's hazy recollection of the event leads Alcide to believe that he had been glamoured. Arriving at the scene, Alcide discovers the gaping hole that had been dug into the concrete floor, the silver chains that had been used to bind Russell in place lying broken and empty at the bottom. ("And When I Die")

Due to his extreme age, he has been mentioned as the strongest and most experienced vampire in the world. With his incredible speed he effortlessly chained the almost 550 year old Jorge Alonso de San Diego to a table and ripped part of a man's spine out of his body. He has also displayed the ability to fly. Due to his age he is much stronger than younger vampires such as Godric, Eric and Salome Agrippa. The only vampires that could potentially outclass him are Macklyn Warlow (a vampire who is nearly twice Russell's age) and Lilith (the progenitor of the vampire race).

Russell has all conventional vampire weaknesses, however, due his age he is extremely vulnerable to sunlight.

Retrieved from "https://trueblood.fandom.com/wiki/Russell_Edgington?oldid=142594"
Community content is available under CC-BY-SA unless otherwise noted.