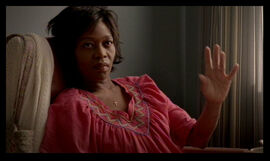 Ruby Jean currently stays at a mental hospital where she is taken care of all day round. Although she herself does not think she is crazy, her behavior proves otherwise. She is often rude to everyone around her, including those she cares for. On one occasion she scolded her son for his homosexuality, while asking him to visit her again at the same time.

Like her son and sister, Ruby Jean possesses the abilities of a medium. Unlike her son however, she does not seem to be in control of her gifts. This inability to control her abilities might be a contributor to her erratic behavior.

Ruby Jean is visited by her son and his cousin, Tara, at the hospital. When the two enter her room she explains to them that the man feeding her, an orderly named Jesus, is the actual Jesus. ("Beautifully Broken")

A few days later after Tara and Lafayette's visit, Ruby Jean leaves the hospital when she is left unattended. She goes to her son's house to protect him from those who would harm him. She claimed vampires and witches were after Lafayette because he had power and he was special. When Jesus comes to get her Ruby threatens him with a knife, saying she won't go back to the hospital and she's not crazy. Jesus talks her into giving him the knife and into just watching some TV.

She is later taken back to the hospital. Before she leaves, she notes that Lafayette and Jesus (who had spent the night together) seem unusually happy, and speculates that "maybe God loves fags!"("Night on the Sun")

Ruby Jean awakes in the night and to her shock sees Jesus Velasquez's severed head on her dresser. Although his lips are stitched shut, she understands him and assures him she will tell Lafayette, and begins shouting for her son immediately. ("Let's Boot and Rally")

Lafayette is summoned to visit Ruby Jean. She tells him that Jesus appeared to her too and wants to talk to him. Lafayette asks why she saw him, and she says that she doesn't know, adding that "the electricity" has always run through her. She tells him to save Jesus, sending him on his way with a few anti-gay epithets delivered in a loving voice. ("Hopeless")