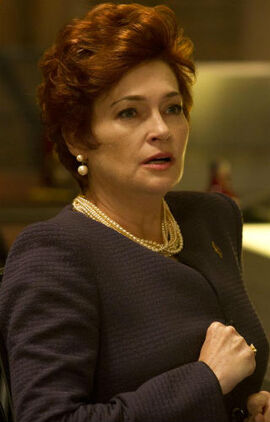 "Well, it chaps my ass to say this, but when you got lame horses, you put 'em down. The mainstreaming agenda is just too damn important. It cannot fail. True Death for these fellas!""
―Rosalyn Harris, on Bill Compton and Eric Northman[src]

Rosalyn Harris is a chancellor of a semi-religious, clandestine council known worldwide as the Vampire Authority on the HBO original series True Blood. Played by American guest starring actress Carolyn Hennesy, Rosalyn makes her debut on the episode "Authority Always Wins" in the series' fifth season. Having cultivated a plain spoken, southern accented persona, Rosalyn plays a recurring role through the same season, and meets an untimely demise on the episode "Save Yourself", at the end of the series' fifth season.

Rosalyn is present when Bill Compton and Eric Northman are escorted in the Authority's office. Roman recites a passage from the Vampire Bible, and gives each Chancellor two drops of his own blood. He excludes the traitor Nora Gainesborough, Eric's vampire sister who is the second progeny of Godric. The chancellors discuss the death of Nan Flanagan, who met the True Death because of Bill, and consider if they should deliver the True Death to Bill and Eric. Rosalyn votes to give Eric and Bill the True Death. ("Authority Always Wins")

Rosalyn is in charge of extracting information from Nora in order to find out why she betrayed the Vampire Authority to help Bill and Eric escape. She proves to be a ruthless torturer, several times making use of the silver IV solution to burn Nora from the inside out and ultimately threatening to deliver the true death to Bill and Eric if she didn't clarify what her relationship was with Bill and/or Eric. As a result, Nora finally confesses that she believes in the literal interpretation of the Vampire Bible, and that she is a Sanguinista, thus making Rosalyn satisfied and presumably ending the interrogation, after which Rosalyn informed Roman Zimojic of the results. ("Whatever I Am, You Made Me")

Alexander Drew tracks Bill and Eric on his laptop from the Authority headquarters. He assumes that they're doing nothing to track Russell Edgington down. Kibwe Akinjide wonders if anyone believes that Eric and Bill did indeed kill Russell a year ago. He suggests that this is a plot to give themselves more time before being killed. Dieter posits that it might be a hoax to rally the Sanguinistas. As they continue their debate, Dieter tells everyone to turn the channel watching Nora. Nora is shown praying to God and Lilith to protect her. Dieter hits the switch to the ultraviolet lights in Nora's cell and ridicules her prayers. Dieter asserts that the Vampire Bible is merely a book and that he knows the author, and that they were high on drugs when they wrote it. Rosalyn laughs and reminds him never to say that in front of Roman. Dieter says that Roman is not there for them to worry about.

Roman delivers an impassioned speech in support of mainstreaming to the chancellors of the Authority. ("Let's Boot and Rally")

Bill and Eric are successful in recapturing Russell. Roman hosts a reception for them and states his intention to have Russell executed. Salome uses Russell to stage a coup, leaving him unrestrained during the execution so that he can overpower and kill Roman. ("Hopeless")

In the ceremony orchestrated by Salome, Rosalyn joins with the Sanguinistas after Russell beheads Dieter in front of everyone. Her reaction indicates that she does this out of fear and does not likely subscribe to the Sanguinista ideology. She drinks the blood of Lilith which causes her to become "high" and walk through the streets of the city. She is later seen with the other Authority members feeding from a group of innocent humans. ("In the Beginning")

After the feeding frenzy in the karaoke bar, Rosalyn expresses her belief in Lilith and her dedication to the Sanguinista ideology. Later, she joins with Salome, as the new Guardian. Russell, Bill and Eric are made chancellors and they meet to devise a plan to eliminate mainstreaming vampires by destroying Tru Blood manufacturing plants. ("Somebody That I Used to Know")

The Authority has Molly brought before them; she is handcuffed and an iStake is attached to her chest. Salome gives Molly one last chance to join the Sanguinistas or face the True Death. Molly says that even if she accept their beliefs, they would kill her anyway. Bill admits that she is right; because she hacked their security systems the Chancellors agreed for the true death as punishment.

Molly flips off her judges and says that they are destroying the world because of a thousand year old bible. She says that their behavior is the opposite of evolved. Rosalyn says that Molly has been a good employee and they don't care when she dies. Bill executes Molly with her own creation, leaving a bloody mess. Steve overreacts as it is the first time that he has seen a vampire staked. The Chancellors bless Molly's remains. Russell asks if anyone is hungry and goes to leave with Steve. Salome objects because Steve has an important TV appearance the next day. Russell argues that the Book оf Lilith instructs them to hunt and feast, not sit around reading index cards. Rosalyn agrees that Russell and Steve should be allowed to have their fun.

Newlin and Congressman Finch argue over the purpose of the attack on the Tru Blood factories for their televised debate. Finch correctly suggests that an anti-mainstreaming vampire faction is responsible. Newlin claims that he is surviving on a personal stock of Tru Blood. Rosalyn watches off camera from the set.

On Rosalyn's return the Authority meet to discuss spreading their message. Russell brings up the possibility of day walking using the blood of faeries. He believes they should attempt to synthesize faerie blood just as they have done with human blood. Salome calls the suggestion blasphemy. Russell attacks her and announces his superiority over all of them, his native accent returning as he loses control of his emotions. He declares that they will not constrain him and speeds out of the room. ("Gone, Gone, Gone")

Rosalyn is present with the other Authority members when they are meeting with General Cavanaugh from the US government.

After Eric kills Cavanaugh, Rosalyn agrees with Eric and states that she is glad he is dead.

Later, Rosalyn shows up at Fangtasia. She questions Tara on the location to her progeny Elijah, the new sheriff of the area. Tara tries to convince Rosalyn that he moved on after she and Pam payed their taxes. However, Rosalyn states that a vampire always knows when their progeny dies. Rosalyn asks Tara if she was the one who killed him. Pam stands up and says she was the one who did it because he was "getting on her nerves." Rosalyn immediately calls in her guards and arrests Pam. On her way out, she catches Jessica hiding and takes her back to the Authority HQ along with Pam. ("Sunset")

Rosalyn collars what she thinks is Steve Newlin in the Authority Headquarters; it is actually the shapeshifter Luna Garza who has come to retrieve her werewolf daughter Emma, who was abducted by Steve to be kept as a pet. Rosalyn takes Luna to make a live television announcement regarding the footage of Steve and Russell killing 22 fraternity brothers. Half way through the interview Luna shifts back into her real form on camera; revealing the existence of shifters to the world. Rosalyn prepares to attack but Luna's boyfriend Sam Merlotte, already shifted into fly form, swoops into Rosalyn's mouth and destroys her by shifting back into his human form inside of her. ("Save Yourself")

Retrieved from "https://trueblood.fandom.com/wiki/Rosalyn_Harris?oldid=141638"
Community content is available under CC-BY-SA unless otherwise noted.