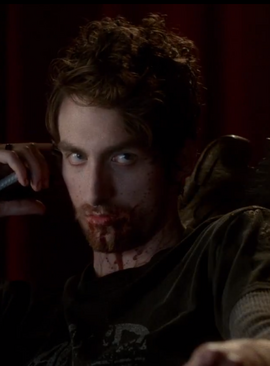 Ronnie was a vampire infected by Hep-V on the HBO original series True Blood. Played by American actor Dustin Ingram, Ronnie makes his debut on the episode "Jesus Gonna Be Here", at the beginning of the series' seventh, and final, season. Playing a recurring role through the same season, Ronnie met an untimely demise in the Season 7 episode "Fire in the Hole".

A group of Hepatitis V infected vampires attack the vampire/human mixer at Bellefleur's and abduct a number of the humans. The vampires are holed up in Fangtasia and they keep their captives chained up in the basement. Among those captured are Arlene Fowler Bellefleur, Holly Cleary, Nicole Wright, Kevin Ellis, and Jane Bodehouse. Ronnie comes down to the basement to choose one of the prisoners to be fed on. He chooses Kevin, but instead of bringing him up to share with the rest of the vampires, Ronnie completely drains Kevin himself. ("Jesus Gonna Be Here")

Ronnie is berated by Jerome, the supposed leader of the Hep-V vampires, along with the rest of the vampires, for draining the human thus cutting their food ration but a fourth. As punishment, Jerome orders Ronnie to take over sleep patrol, and says that he will eat last from now on until he can prove he can be trusted. ("I Found You")

Ronnie and the group of infected vampires are out on the hunt for humans. At the same time, Sookie has hatched a plan to take out the H-Vamps by luring them out and using herself as bait, with Bill and other lying in wait. Her plan works as it turns out, as Ronnie and the other vampires try to take her. Ronnie and another vampire grab Sookie, but before they are able to take her they are both shot with wooden bullets, dying instantly. ("Fire in the Hole")

Retrieved from "https://trueblood.fandom.com/wiki/Ronnie?oldid=141300"
Community content is available under CC-BY-SA unless otherwise noted.