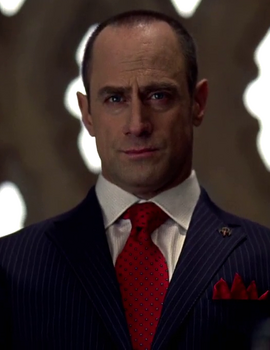 Roman Zimojic, also known as the Guardian, was the leader of the Vampire Authority on the HBO original series True Blood. Played by American co-starring actor Christopher Meloni, Roman makes his debut on the episode "Authority Always Wins" in the series' fifth season. An ancient, powerful and imposing vampire, Roman was the 500-year-old leader of the Vampire Authority, and, by extension, the supreme ruler of all vampires on earth. The visionary responsible for orchestrating the Great Revelation, and the movement that followed it, Roman is a staunch believer in the righteousness of his cause, Roman is relentless in persecuting those who oppose him. Playing a recurring role through the series' fifth season, Roman met an untimely demise in the Season 5 episode "Hopeless".

Overall Roman was a calm and composed vampire. He was one of the more "evolved" vampires and had grown to see humans as people and not just food. He was a man of peace instead of war and sternly believed in the peaceful co-existence of humans and vampires. As so he orchestrated the Great Revelation and the production of Tru Blood.

Despite his preference for peace, his temper could reach it's limit. Especially with those who did not believe in the mainstreaming movement. He also tended to deal ruthlessly with those who opposed or displeased him.

"You were a pompous, self-righteous prick in the fucking Renaissance, and you still are one today."
―Russell Edgington, to Roman Zimojic[src]

Roman was made vampire in approximately 1510 C.E. possibly in Serbia as his surname is Serbian. He envisioned establishing a world in which all beings both human and supernatural lived together in peace. 100 years later he was joined in his cause by seven other vampires, who became his closest advisers, thus the Authority was born.

He acknowledges that as a new vampire he thought about nothing but killing and having sex. ("Whatever I Am, You Made Me")

He and Salome have been lovers for at least 400 years.

It seems Russell and Roman were acquainted during the Renaissance period.

"Fundamentalism is a dead end, and I won't fucking have it!"
―Roman Zimojic[src]

Eric and Bill are lead into a room with the Authority. Roman enters from a side door. Before speaking to them, he holds a type of communion with the blood of Roman (which he takes from his own wrist to symbolize that of Lilith's). One by one, he drops a blood into the mouths of each member. After the ceremony, Roman turns to Bill and Eric, stating he hates to meet under these circumstances. Nora is pulled out of the room, and Eric shows he wants to help her, yet he is bound and cannot. She yells out "I am innocent", before disappearing. Roman sits and starts to discuss of the errors they have made. The rocket launcher used on main street, the fight breaking out between vampires and humans during the Festival of Tolerance. He tells them that they are the Authority, just as Nan was. He then tells them they will see the True death. Roman also asks about the Sanguinista movement. Bill says he knows nothing about it, and Eric says he tries to stay out of politics.

The Authority has a meeting before them. They all believe they should meet the True death. Roman says that mainstreaming is the only way to live. That they must co-exist with humans. Salome opens a briefcase and pulls out a stake for Roman. Bill speaks up when asked if they have any final words. He says he will offer up an exchange."Our lives in return for Russell Edgington." Roman was told by Nan that Russell was dead but Bill assured him that Eric and he put him in the ground but did not kill him. Eric states that Russell has broken free. Whether they live or die, the Authority will find out soon enough. Bill says that Russell will obliterate the Authority's cause. Roman, in vampire speed stands behind Bill with a stake, angry that he allowed the happenings with Russell. Eric yells out "Quiet!", and that he was the one who did it. Still, Roman is mad that Bill, a king, allowed it. Roman pulls back and says he cannot go on personal desires. Bill states that Russell will stop at nothing to kill Eric and Bill, and when he does, Roman will be there to put an end to him as they should have. ("Authority Always Wins")

"Do you know the one thing more dangerous than a martyr? A 3,000 year old vampire who hasn't fed in over a year. Suffering doesn't kill the appetite for power, it exacerbates it. I have dedicated my guardianship to the fight for co-existence and I will not see it go swirling down the shitter because of one ancient pissed off psychopath"
―Roman Zimojic, to Bill Compton and Eric Northman (about Russell Edgington)[src]

The Authority continues to debate what to do with Bill Compton and Eric Northman for leaving Russell Edgington alive. Roman assures them that he will take their opinions under advisement and sends them away, except Salome Agrippa. Roman reveals to Eric and Bill that Russell has become a "poster boy" for Sanguinistas for what he did on public television. Roman makes it clear to them that he will not see mainstreaming ruined by one ancient, pissed off psychopath. Bill and Eric assure him that they understand and promise to bring Russell in or die trying. After sending them away, Roman calls in for the new "Nan Flanagan", revealing it to be Reverend Steve Newlin.

Roman explains to Steve Newlin that Nan told the world that Russell was dead, and that they have just learned that the announcement was a lie. Steve says that there is no proof and that people will believe anything they want to because of their irrationality and motivation to live in fear. Steve asks Roman that he'll make the world believe whatever they want. Roman finds Steve's words insulting, reminding him that humans birthed them before they became vampires, which makes them their ancestors. Roman elucidates that if vampires continue to act like savages, humanity will rise up with their armies and attack them. Roman explains that if Russell pops up on television again, threatening to eat children, then he will need a friendly vampire mainstreamer who knows how to work a crowd. Steve assures that he will not let him down. Roman caresses his face then sends him away. He instructs Salome to ensure that Bill and Eric are thoroughly scanned to avoid a repeat of the "necromantic bullshit" Marnie did the year before. Bill and Eric are fitted with iStakes by Molly. Salome then seduces each of them.

Once Salome is alone in her bedroom, Roman comes in and asks her if she had fun. Salome reveals that neither Bill nor Eric are Sanguinistas and that they can be trusted. Roman says he's not sure that anyone can be trusted because Nora has confessed to being a Sanguinista. Salome suggests that they take a different route since mainstreaming has divided vampires. Roman says that's exactly what they want and refuses, convinced that mainstreaming is working. Salome says that she's afraid for Roman. Roman says she shouldn't be and with her as his secret weapon, there is nothing for her to worry about. ("Whatever I Am, You Made Me")

Salome offers Roman Tru Blood and he refuses while he lays on their bed watching Nora Gainesborough's continued torture on his laptop. Roman still believes that Nora is holding back information. Salome suggests continuing her torture until she breaks. Roman says that he would rather have Salome speak to her as Nora sees Salome as a sister. Salome asks Roman what will happen if she doesn't. Roman answers that they will execute her publicly as a warning to the Sanguinistas that the Authority is just as willing to kill for their beliefs. Salome tells Roman that she can be very persuasive.

Salome and Roman enter Nora's cell. Salome releases Nora's manacles. Roman asks if she accepts the true death for her treason. Nora struggles to her knees and accepts her fate. Salome says she refuses to see Nora die for the other Sanguinistas and to tell her who is gathering others to bring the Authority down. Roman derisively says that Nora is not a leader. Nora responds that they have seared and sliced every inch of her body and she has nothing else to say. Roman asks if she cares about Eric and Bill if not herself. Nora says they will be killed whatever she does. Roman asks if he should kill them now and pulls out his phone, showing his application to activate the iStakes. Nora looks terrified and asks how she can trust in their safety if she reveals who the Sanguinista's leader is. Salome bites her wrist and smears blood in a cross on both her chest and Nora's. Salome offers her most solemn vow that if Nora tells them who the leader is then Eric and Bill will be spared. Nora collapse in Salome's arms and begins to cry.

Roman meets with his chancellors and shows them a stake made from the Judas Tree, tipped with the thirty pieces of melted silver that belong to Judas. He considers it the holiest of holy weapons. Dieter attempts to discuss other matters. Roman says that he can't do that as he's having all of the Authority's member's quarters searched. Kibwe says that isn't necessary as all of them are loyal. Roman counters that they know that there are others who still refuse to accept mainstreaming and if one chancellor can be turned into a Sanguinista, then why not two. A pair of guards enter with a laptop and a note. Roman reads the note and Salome asks if it's true. Roman places the note down and confirms that there is another traitor. Roman then places the laptop in front of Alexander and plays a video of Alexander feeding on a human. Alexander tries to plead his case, but Roman reveals the video has been sent to all of the Authority's enemies. He stakes Alexander, covering himself in blood. Roman asserts that there will be no more rebellion or opposition to his cause and they will all fall in line. ("We’ll Meet Again")

Roman mourns the betrayal, and death of Alexander, revealing to Salome that they were close friends, and wrote the Vampire Rights Amendment together. Salome tries once again to sway Roman into abandoning the current agenda, but Roman remains steadfast in his dedication, confessing his own cynicism in the authenticity of the Authority's sacred urn, which supposedly contains the blood of Lilith.

Roman later gathers all of the Authority's ambassadors before him, and delivers an impassioned speech, reaffirming his commitment to mainstreaming, and vowing not to yield to the fanatics. ("Let's Boot and Rally")

Roman acquits Bill and Eric and celebrates the capture of Russell Edgington with them and the rest of the Authority. He announces his intention to execute Russell before sunrise and even breaks out a bottle of 200-year old blood to toast their success. As a weakened Russell is dragged into the room, Roman taunts him for his attempts to overthrow the Authority and even takes it upon himself to be the executioner. As he tries to activate the iStake strapped to Russell's chest, he realizes that it's malfunctioning. In a flash, Russell tackles Roman and instantly kills him with his own stake. ("Hopeless")

Roman has the common powers and weaknesses of a vampire such as superhuman strength, speed, and senses, along with immortality and rapid healing. He is a lot stronger than younger vampires such as Nora Gainsborough, Dieter Braun, Rosalyn Harris, Bill Compton and Alexander Drew. But is weaker than older vampires such as Eric Northman, Salome Agrippa, and Russell Edgington.

Retrieved from "https://trueblood.fandom.com/wiki/Roman_Zimojic?oldid=143550"
Community content is available under CC-BY-SA unless otherwise noted.