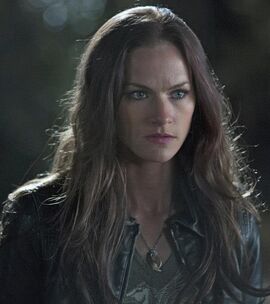 "They're doing what they're doing to the vampires, there won't be a pack."
―Rikki, afraid of the pack's extinction.

Rikki Naylor was a werewolf on the HBO original series True Blood. Played by American guest starring actress Kelly Overton, Rikki made her debut on the episode "And When I Die", at the end of the series' fourth season, appearing only in wolf form. A member of the Shreveport, Louisiana pack of wolves, Rikki plays a recurring role through the series' fifth and sixth seasons, and was last seen in the Season 6 episode "Dead Meat".

As a werewolf, Rikki has a rather short temper and is fast to point out thing she does not like or agree with. She is not afraid to act on her beliefs and openly defies anyone she does not agree with.

As alpha female of the Shreveport pack, Rikki is very concerned with the safety of her pack. This leads to impulsive actions which do not always correspond with the commands of her pack master.

Rikki is a werewolf.

Rikki appears in werewolf form. ("And When I Die")

Rikki shows up with fellow pack members, surrounding Sam Merlotte. She is questioning him, wondering the whereabouts of her packmaster Marcus Bozeman. It has been 2 days since she has last seen him, and knows that Sam and Alcide Herveaux were last seen with him. Finally negotiating, she brings Sam back to the pack to be tortured and questioned.

The Shapeshifter later leads them to Marcus's body in order to protect Luna and Emma Garza from the fury of the pack, even if it meant his death. However when Rikki ordered Merlotte to dig his own grave, Alcide intervenes and admits that he killed Marcus. ("Turn! Turn! Turn!")

Alcide refuses to take over the pack leader position. Luna takes Sam home and Alcide leaves the pack to feast on the corpse of their dead leader. ("Authority Always Wins")

Rikki sits on the side watching J.D. mess around with another woman while Martha is out. Rikki tells another pack member about her distaste for J.D. Alcide walks in and challenges J.D., accusing him of being a V addict. Rikki steps up as Alcide's second. ("Hopeless")

Rikki and Alcide are in the barn training for the fight with J.D. But after talking a bit Alcide tells Rikki he's prepared to lose. Rikki suggests they drink vampire blood to level the playing field. But Alcide refuses saying that vampire blood will destroy you in the inside. During their training Rikki and Alcide begin to fool around and end up making out before being interrupted by Martha. Martha tells Alcide about how she's with J.D. when he says he's not on V. Martha then says J.D. let Marcus become alpha after Marcus' father died, so now it is J.D.'s turn to be alpha. Then not even Rikki can deny that J.D. had done a lot for the pack. But Rikki is still siding with Alcide. ("In the Beginning")

J.D. and Alcide fight in the woods. J.D. gets the upper hand and is about to kill Alcide when the rest of the pack arrive on the scene. Martha convinces him not to kill Alcide, but J.D. tells Alcide to find another pack. ("Somebody That I Used to Know")

Alcide is talking with his father when Martha brings Rikki to the trailer. She has been forced to drink an overdose of V. Jackson gives her a colloidal silver remedy to force the blood out. Alcide wants to fight JD again to oust him as pack master. His father suggests that they even the playing field by drinking his stash of high quality V. Alcide agrees and easily defeats JD, proclaiming himself pack master and laying down the law to his pack. ("Save Yourself")

"I am your number one bitch, don't ever forget it."
―Rikki to Alcide[src]

Alcide takes over his pack as they eat the latest packmaster, J.D. One of the wolves brings an arm over to Alcide so he can inherit the flesh and truly become the new packmaster. He takes a bite out of the arm and is now the new pack master. Danielle, a young woman from the pack, shifts from wolf to human and tells Alcide that she is more than willing to serve him in any way he needs. While this is happening, Martha tells Rikki that Alcide is still on the blood, while watching Danielle and Alcide. Rikki doesn't look too happy about it, but Alcide enjoys the attention because of the vampire blood in his system.

As Alcide's pack of wolves go for a run, Danielle comes to Alcide alone. Naked, she offers herself to him. He gives in because the drugs are still in him and gets caught by Rikki, while kissing this other wolf. Instead of being angry she brings the other girl in to their relationship sexually. She bites the back of the girls neck showing her that she is above her and tells Alcide "I am your number one bitch, don't ever forget it." ("Who Are You, Really?")

When Nicole Wright's group of reporters come to the Shreveport pack in order to speak to them (and also to record them actually turning into Werewolves due to them seeing a confrontation the previous night), Rikki is not pleased and neither is the rest of the pack. Alcide tells them to leave but Nicole is persistent and Rikki snaps. Despite being ordered not to, Rikki shifts into wolf form and attacks the reporters and the rest of the pack save for Alcide, Jackson and Martha, follow Rikki's example. They kill Jessie, Bruce and Mustard but Nicole escapes as the wolves pursue her. Martha rushes out to tell Alcide that Sam has used the diversion to kidnap Emma. ("The Sun")

Rikki, Martha, Danielle, Jackson and Alcide search for Emma and Rikki uses her sense of smell to deduce that Nicole is not far away as her bandage is fresh from a wound inflicted on her by one of the pack. Alice orders Martha, Rikki and Danielle to go back home whilst he and Jackson find Emma but Rikki refuses. He reminds her that he is her packmaster and she angrily complies. ("At Last")

Alcide drops his father Jackson Herveaux off at his trailer. His father asks him to stay and warns that pack life isn't for either of them and one day he will realize it, but Alcide ignores his fathers warning. He returns to his pack and tells Rikki and the rest of them that Sam and Nicole were dead and Emma was with Martha. Rikki reveals they found Nicole and her mother so the entire pack of wolves know that Alcide was lying to them all. They begin getting aggressive and closing in on him. ("In the Evening")

Rikki tells Alcide that he is lying out of his teeth about Nicole and Sam being dead, so she begins abusing Nicole and her mother who was captured by the pack. Because Alcide betrayed the pack, Rikki announces she is going to challenge him as packmaster because she knows he will not kill her. Danielle seconds her and they fight. Alcide beats up Rikki but does not kill her. ("Dead Meat")

Rikki is a Werewolf who is in the Shreveport Pack and was Alcide's second. Werewolves are known to be more powerful than a Human, but weaker than a Vampire of a moderate age. In Human form however she showed the ability to pin down Alcide during training, and displayed wolf-like agility. In Human form she was able to pounce like a wolf, and run fast enough to compete with a moving vehicle. She can make her eyes glow by will or strong emotions.