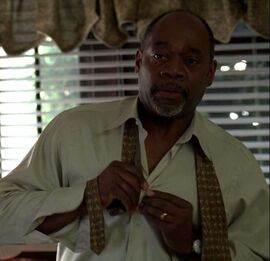 Reverend Daniels is a preacher living in the small town of Bon Temps, Louisiana. He currently preaches at the Bon Temps church.

Reverend Daniels is called by Lettie Mae to help Tara through Eggs' death. Lettie Mae however, seems more occupied with him, than helping her own daughter. ("Bad Blood")

At the end of Season 3, Tara discovers her mother having an affair with Reverend Daniels; however Tara decides to give her blessing. ("Evil is Going On")

We learn the Reverend Daniels and Lettie Mae have married. Presumably he has divorced his wife for her. ("Me and the Devil")

Reverend Daniels appears in the final episode when he hosts a Bon Temps community gathering in his church. He joins in Sam's plan to pair vampire residents with humans as a mutual deal. Vampires will have a source of food while humans will receive protection from the marauding infected vampires that have threatened and possibly slaughtered little communities all over the world. ("Radioactive")

Reverend Daniels helps Willa Burrell find a place under his church after she helped Lettie Mae heal. He later holds a memorial service for the people who lost their lives during the vampire attack. ("Jesus Gonna Be Here")

Male, African American. The pastor at Lettie Mae’s church, he tries to offer comfort to Tara, and suggests that all her hardships are part of God’s plan to bring her back to her mother. He’s a bit uncomfortable when Lettie Mae’s hug goes on too long…GUEST STAR