Bill breaks a vampire taboo in saving Sookie from vampire Longshadow's attack, and must pay a steep price as a result. Jason and Amy break their own taboo by kidnapping a vampire named Eddie in order to harvest his blood. With Lettie Mae apparently cured, a skeptical Tara consults with Miss Jeanette about exorcising her own inner demon. Sookie returns home to yet another horrific tragedy, prompting Bill to enlist an unlikely bodyguard - Sam - to protect her while he's away.

"If you're their poster boy,
the mainstreaming movement is in very deep trouble."
― Eric Northman, to Bill Compton

After Sookie outs the bartender vampire Longshadow as the thief at Fangtasia, Longshadow attacks Sookie. Bill reacts by snapping off a beer tap and staking Longshadow through the back to protect Sookie. Longshadow spews blood all over Sookie; Eric and Pam watch, unconcerned; Ginger screams and vomits. Pam takes Sookie into the ladies' room to clean up, where they are soon joined by the newly glamoured Ginger who is pleased to meet Sookie.

Meanwhile, Eric tells Bill that he will have to pay for killing Longshadow in front of humans. Eric offers to take Sookie in payment, but Bill refuses. Bill brings Sookie home dressed in leather. He tells her everything's fine with Eric, but, at home, it isn't. There's blood on the walls and Sookie's cat is hanging dead from the ceiling fan. Bill wraps around Sookie, clothed, in bed. He tells her he'll protect her because the trouble she's in is his fault. She says it's hers because she chose it.

Sookie closes her eyes and sees her grandmother, Adele.

At the same time, Amy and Jason speed away from vampire Eddie's house with him bound in the back of Jason's truck. Jason is panicking, but Amy keeps a cool head, her mood completely changed from earlier in the day. Jason notes that Amy has clearly kidnapped vampires before. They get Eddie back to Jason's house, tie him to a lounge chair in the basement and Amy convinces a nervous Jason to do V with her. The two have sex in front of Eddie, stopping to thank him for the gift of his blood. Eddie does not appreciate their gratitude as he bleeds.

That night, Tara returns to see Miss Jeanette to ask about the exorcism. Tara balks at the exorbitant price ($799.95), but Miss Jeanette claims it is because Tara's demon is worse than Lettie Mae's. She warns Tara not to wait, her loneliness is spreading to her eyes. She tells her to count backwards from ten when she's alone to see if she can stand herself.

The next morning, Tara tries this but is interrupted by her mother, Lettie Mae telling her, "Sam is at the door with flowers". Her mother assumes she slept with him, but he simply came to apologize. Tara tells him they are not going to work and asks him if he's a masochist. As proof of her unsuitability, she tells him about the exorcism she's starting to think she needs. She says she doesn't have the money for it and runs him off. However, later at the bar, Tara finds an envelope with the money she needs for the exorcism from Sam.

She is reluctant to accept it but eventually concedes and they kiss; Sookie spies them from the doorway.

Before heading into work, Amy and Jason picnic in his yard. Jason is worried that Eddie's screams will be heard, but Amy soothes him. She tells Jason that everything will work out and that she loves him. Jason returns the sentiment.

At work, Jason is still is feeling the effects from the V. He finds himself attacking Rene who is about to jackhammer away some tree roots. Hoyt and Lafayette have to hold Rene back to keep him from angrily attacking Jason in response. As Lafayette leads Rene away, Hoyt tries to talk to Jason who goes off on him for daring to call him "Jay".

Jason comes home and finds himself trying to deal with a screaming Eddie. He hurts his back adjusting Eddie in his bonds and stays in the basement chatting with the vampire as he works off the pain. Eddie tells Jason about himself. He talks about his wife and son, realizing he was gay and deciding to become a vampire. Jason tells Eddie about the death of his parents. Eddie lends a sympathetic ear. He feels bad that Jason had to grow up without a male influence like Eddie's son is now that he's gone.

Jason worries that Eddie might glamour him, but Eddie says he hasn't learned that yet. He asks Jason if he's going to marry Amy. When Jason says she might be the one, Eddie tells him not to, that she's a psychopath. Jason curses him and leaves for more beer. But, when he returns, he has brought Tru Blood and feeds Eddie.

At Merlotte's that afternoon, Arlene coaxes Sam into letting her have her engagement party there. Sookie comes in angrily and takes her anger out on Andy demanding he hurry up and catch the killer. Andy is rescued by Amy who suggests Sookie take a break. Outside, Amy and Sookie chat. Soon they're talking about Arlene and marriage and then what Amy intends with Jason. She tells Sookie Jason misses her and loves her. Sookie concludes Amy is way too good for Jason.

Bill is home playing golf on his Wii. The doorbell rings. It's Eric, Pam and a new guy, Chow Lin, Longshadow's replacement. Bill says "I take that it couldn't be avoided" (He meant the trial). He says he has to stop by the bar and tell Sookie he'll be gone for a while.

Bill and his entourage arrive at Merlotte's. Bill needs to talk to Sam. He tells Sam he's been called away and he needs Sam to watch over Sookie. Sam's not happy Bill is asking, but says he'll do it for Sookie. Outside, Eric and Pam pass out brochures for Fangtasia. Eric announces that vampires know when a human has wronged them. Bill tells Sookie he has to stand trial. She realizes he lied to her about everything being okay. Sookie is upset that Bill has to leave and cries as she kisses him goodbye while Eric yells at him to hurry up.

Tara, having seen the whole thing, tries to talk to Sookie. She starts to apologize for their earlier fight, and Sookie tells her she can't even remember what she's supposed to be mad about. Tara gives her a hug. She asks Amy to cover the rest of her shift. When Amy asks if it's a good idea to go home, Sookie says she's going to stay at Bill's because no one will look for her there. Sam comes out, zipping up and asks Amy where Sookie is.

When she tells him, he runs out but is stopped by an increasingly suspicious Andy in the lot. He calls Sam out on his naturalist story and says they need to talk. Sam says he forgot something in the bar and will be right back. The watchful dog runs out of Merlotte's right past Andy.

Seconds later the dog is at Bill's front door. Sookie greets him and welcomes him inside for the night. He looks away as she changes, a gentlemanly dog. Sookie invites him onto the bed with her deciding to call him Dean. Sookie wakes up in the middle of the night thinking Dean is sleeping on her feet. She sits up to see something is on her feet... a naked Sam. They both scream. 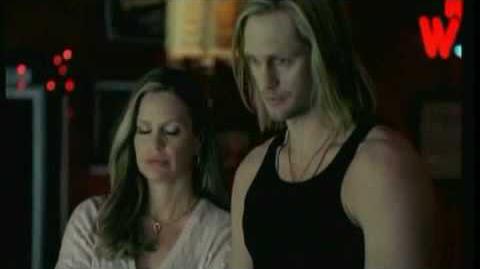 Jason Stackhouse: (to Amy) "I shoulda known somethin' wasn't right the second you walked into my life carrying that big bag of crazy. 'Cause any woman with a purse that big is bound ta have somethin' I don't wanna know about."

Bill Compton: "Tell me, do you enjoy livin' halfway up his backside the way you do?"
Pamela Swynford de Beaufort: "Yes, it's nice. You should try it sometime."

Retrieved from "https://trueblood.fandom.com/wiki/Plaisir_D%27Amour?oldid=144699"
Community content is available under CC-BY-SA unless otherwise noted.