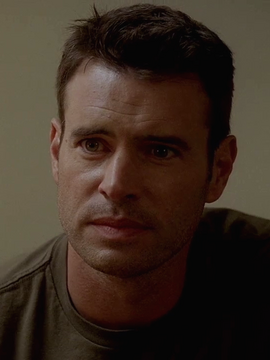 "You're the strong, silent type."
―Arlene to Patrick[src]

Patrick Devins is Terry's former platoon leader from his military days in Iraq. Back in Iraq in 2003, when Terry and Patrick were serving together along with Todd Jeffries and Jemarcus Kessler, they were traveling to a small town to party and blow off steam, when the night goes horribly wrong.

Little is known about his past, but at some point he joined the Marines. While in Iraq, Terry saved his life twice.

Patrick shows up at Merlotte's Bar and Grill surprising Terry, who believed his old friend was dead. Terry introduces Arlene before Terry and Patrick catch up over drinks. ("And When I Die")

After visiting the Bellefleur residence Patrick reveals to Terry that he lost his own home to a fire, as did two other members of their old platoon. He asks Terry to help him locate Brian Eller but Terry refuses. ("Turn! Turn! Turn!")

At the Bon Temps Motel, Arlene shows up at Patrick's room. She begins to tell him of Terry's night terrors. She is there asking if something happened in combat. Patrick tells her that nothing comes to mind. Terry shows up and tells Arlene to leave. Terry says he needs to talk to the Sergeant alone. She also says she has kids, and whatever is happening, fix it. Terry says that Private Eller is alive and Patrick insists that he is dangerous. Terry says he knows where he lives. Patrick suggests visiting him before they get their own visit. ("Authority Always Wins")

Patrick and Terry Bellefleur are en route to South Dakota searching for their squadmate Brian Eller. Patrick asserts that if they don't find him, Terry is driving them back home. Terry says that they'll find him and won't leave until they do. Terry has a flashback to their tour in Iraq.

They prepare to camp out on a Muslim prayer tower, in open defiance of the building's religious significance. Patrick shows the others that he has acquired a couple of bottles of Jack Daniels to celebrate the Fourth of July. Todd Jeffries holds up a bag of pills and Patrick adds that they have "candy". Patrick gives Eller a miniature bottle and places him on watch duty below the tower. The platoon enjoy themselves by getting drunk and high and watching fireworks. They sing together and are enthralled by the light show. Their revels are interrupted by an Iraqi Teen walking toward the tower. Eller argues with him and Corporal Jemarcus Kessler orders Eller to get rid of him. Eller misinterprets the order and shoots the civilian dead. The people of town are drawn out by the shot and harangue the squad for the unnecessary violence. An Iraqi insurgent shoots at them and Eller opens fire on the crowd before being hit on his bulletproof vest and knocked to the ground. The rest of the squad take cover behind their Hum Vee. During an exchange of gunfire, Terry spots the attacker and points him out to Patrick, who kills him. As they check on Eller, Terry sees that the Iraqi civilians have been killed by the gunfire. A shocked Terry falls to his knees in horror. Patrick then wakes up Terry from his nightmare and tries to calm him down.

Terry and Patrick search Eller's barn at night. Terry notices a hidden trap door. They both climb down into the basement and find pictures taken and drawn of homes on fire. Eller then appears, aiming a shotgun at them. ("We’ll Meet Again")

Brian Eller has Terry tie Patrick to a chair, and then proceeds to tie Terry to another chair. Eller demands to know if anything followed them and Terry says no. Eller then climbs out of his cellar, leaving them trapped.

Patrick and Terry look at a horrific mural Eller has painted on his basement wall. Patrick believes that it was Eller that burned down their homes. Eller comes down and aims his shotgun at Terry's head, saying that maybe if he kills Patrick and Terry, "it" will forgive him. Eller says that he saw Kessler and his wife burn. When Terry asks how, Eller explains that he was crashing on their couch for a bit after they came back from Iraq. One night, Eller says he woke up and says the house was on fire. When he noticed Kessler and his wife were trapped, he tried to help them but said that the fire unnaturally moved towards them and intercepted them as they ran, killing them both. Eller panicked and jumped out the window, then ran. Eller did some research and found out about Ifrit; a being of smoke and fire that is targeting them for what they did in Iraq on their drunken night. Terry flashes back to that night and recalls that there was one survivor, an Iraqi woman. Patrick tells Terry to put her down, but Terry believes they can save her. Patrick refuses to be dragged down about what they did considering how long they have been in Iraq. Terry believes that they can help her, but Patrick reminds him that the man to his left and right are more important. Terry reluctantly aims his rifle at the woman. She places the curse of Ifrit on all of them just before Terry shoots her to death.

Terry has another flashback to his squad's misdeeds in Iraq. They gathered the corpses of the villagers and doused them with gasoline. Eller ignites the pyre by tossing his lighter on top of it as Terry watches, horrified. Terry sees a being rise from the smoke of the burning bodies. Terry snaps back to reality and tells Eller that he saw the Ifrit, too. Eller is relieved that he isn't crazy. Terry says that they need to leave. Eller disagrees and Terry expands that they need to leave because the Ifrit has been waiting for them all to be in one place. Eller releases them and Patrick knocks him out with his own shotgun. Patrick praises Terry's acting. Terry says that it wasn't an act and that they need to leave. Patrick says that he is sick of being around "crazy fucks". He orders Terry to either help him to tie Eller up or leave. Frightened, Terry climbs the latter and steps outside to have a cigarette as Patrick restrains Eller. Patrick joins him outside and says that they'll turn Eller in to the local authorities in the morning. Terry tries to tell Patrick that he did see the Ifrit that night, but Patrick insists that they were on drugs that night and saw nothing. He still believes that it was Eller who was burning their homes. Patrick is proven wrong when the Ifrit comes for Eller, setting the basement alight. ("Let's Boot and Rally")

Terry and Patrick are leaving Eller's compound. They see the smoke and flame of the Ifrit, and break into a run.

As they drive away, Terry throws himself from Patrick's car and tries to run away. Patrick chases him down. Terry is terrified and tells Patrick that they are going to pay for their misdeeds. ("Hopeless")

The Ifrit appears to Terry and Patrick, mocking them with laughter. Terry yells at the monster to come back and then tries to kill himself, grabbing Patrick's gun and putting it to his throat. Patrick talks Terry down and retrieves the gun. ("In the Beginning")

"Somebody That I Used to Know"Edit

Lafayette agrees to attempt to get rid of Terry and Patrick's curse. He goes through the motions at first, but then the Iraqi woman actually makes an appearance. Lafayette tells the soldiers that she is still furious and the only way to break the curse is for one of them to die. Patrick jumps up and runs off. ("Somebody That I Used to Know")

"Everybody Wants to Rule the World"Edit

Patrick grabs Arlene and holds her at gunpoint as she arrives at Merlotte's to start her shift. He tells her to call the other employees and tell them that the restaurant is closed that day.

Terry arrives at Merlotte's, unarmed. He finds Patrick sitting in a booth with his gun at Arlene's head. Terry offers a fair fight, but Patrick thinks Terry is too strong. Just as Patrick is about to shoot Terry, Arlene stabs him in the neck with a hairpin. The two men fight and eventually Patrick gains the upper-hand. Once again Arlene comes to the rescue, grabbing the gun that Patrick had dropped.

Terry turns the gun on Patrick. Patrick pleads that his girl is pregnant and it's going to be a boy, he begs Terry to do the right thing. Terry hesitates, until he has a vision of Zaafira telling him the same thing. He kills Patrick. Zaafira says "blood has been paid with blood." Ifrit, a fire jinn, materializes and takes Patrick's body. ("Everybody Wants to Rule the World")

Retrieved from "https://trueblood.fandom.com/wiki/Patrick_Devins?oldid=136811"
Community content is available under CC-BY-SA unless otherwise noted.