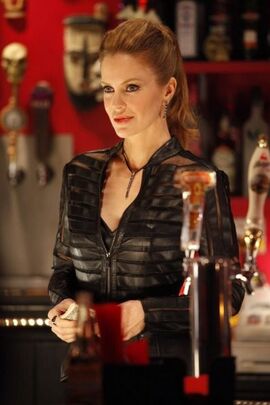 "I don't know what it is about me that makes people think I want to hear their problems. Maybe I smile too much. Maybe I wear too much pink. But please remember I can rip your throat out if I need to. And also know that I am not a hooker. That was a long, long time ago."
―Pam[src]

Pam is extremely loyal toward Eric, and acts as his sidekick. She is often blunt when explaining things or dealing with most people, regardless of their species. She has a very morbid sense of humor, with a sweet yet highly lethal charm. She can also be very cold and uncaring when dealing with people and seems apathetic to the concerns of others. She could even be described as a sociopath, especially towards non-vampires.

Eric has described her as lazy and disobedient, though she is efficient enough to finish all of her required work. Pam strongly dislikes children and appears to be much more sexually interested in women than men (with Eric being the exception), although she doesn't easily make friends with either sex. Pam delves deeply into the vampire belief that they are superior to their human counterparts.

Pam is also known for being very much a "smart-ass", and is often sarcastic and witty. She is cunning, a trait she was shown to have even as a human madam. Pam cares a good deal for fashion, and makes sure her clothing is always the latest style. She never much cared for being a maker, and once she becomes one, she finds raising the new vampire difficult. Pam shows great loyalty to those within her vampire family, particularly to her maker Eric and progeny Tara Thornton and even grows to care for Willa Burrell, her vampire sister.

Pam has the common powers and weaknesses of a vampire, including superhuman strength, speed and healing. She has a natural affinity for glamouring. As of season 6, Pam has demonstrated the ability to fly. This ability has only been demonstrated by a select few vampires, and appears to manifest particularly in those descended of Godric's bloodline. Due to her age, she is much stronger and faster than younger vampires such as Jessica Hamby and Tara Thornton, but is still far weaker than her superiors. However, she has shown herself capable of overpowering her elder, Bill Compton, using a combination of liquid silver and her own enhanced vampire speed and strength. Pam is shown to be a good combatant. This is shown when she fights Bill, kicks Elijah, and kills several of Mr. Gus' men.

After drinking the blood of Billith she gained the ability to daywalk, making her able to walk outside when the sun is shining. After the death of Macklyn Warlow she along with all the other daywalkers lost that ability.

Her weaknesses include a stake to the heart, silver, Hepatitis V, fire, and sunlight.