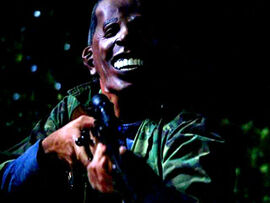 The Obamas are an anti-supernatural hate group on the HBO original series True Blood. Named after the masks they employ to conceal their identities and of the United States' 44th President Barack Obama, the Obamas plays a vital antagonistic role through the series' fifth season. They are responsible for the deaths of numerous supernaturals, including vampires and shifters.

Sweetie Des Arts' husband left her for a shapeshifter, which was the catalyst for Sweetie's deep-seated hatred of anything or anyone supernatural, which ultimately led to the creation of the Obamas.

The remains of several vampires who have been victims of hate crimes are displayed on the news. It is implied but never confirmed that the Obamas were the hate group responsible.

The Obamas attack the local shifters of Bon Temps, Louisiana, and succeed in murdering Suzanne McKittrick and Emory Broome. Sam Merlotte discovers their bodies and reports the shootings to the police. ("We’ll Meet Again")

The Obamas later attack Sam at Luna Garza's house. They manage to shoot Sam and Luna. They then fire shots at Luna's daughter, Emma, driving her away. ("Let's Boot and Rally")

The shooting investigation exposes Junior as an Obamas member. He is shot and killed by Sam Merlotte with a crossbow when he reaches for a weapon during questioning.

The Obamas spot a vampire about to drain a suicidal Hoyt Fortenberry (though Hoyt had given him permission to do so). They shoot the vampire dead and pull Hoyt into their van, telling him that they have saved his life. ("Hopeless")

The group attempts to induct Hoyt, revealing their identities and their hatred of supernaturals. Hoyt is sympathetic because of his failed relationship with Jessica Hamby. He accompanies them on their next mission. They return to the hospital to make another attempt on Luna's life. Joe Bob is exposed and arrested and the others flee. ("Somebody That I Used to Know")

The group abducts Jessica from Fangtasia. Reggie lures her outside by posing as a fangbanger. They take her to their compound and challenge Hoyt to kill her. He cannot bring himself to do so and frees her instead. She kills Reggie and Hoyt leaves the compound.

Hoyt is picked up by Bud Dearborne and is taken to Bud's pig farm drugged with Oxycontin for his disloyalty. The group also captures Sookie Stackhouse when she comes to talk to Bud about her past. It is here that Sweetie Des Arts is revealed to be the leader of the Obamas, the "dragon".

Sheriff Bellefleur realizes that Bud is the connection between the Obama members he has exposed. The police raid Bud's pig farm as he is about to have Ray and Tyrese feed Hoyt to the pigs. Bud is shot and killed, and Ray, Tyrese and Sweetie Des Arts are arrested. ("Everybody Wants to Rule the World")