Nothing but the Blood

"Nothing But The Blood" is the first episode of Season 2 of the HBO original series True Blood, and the series' thirteenth episode overall.

The staff at Merlotte's are on edge when they find the body of a woman - who turns out to be Tara's fake exorcist - in a parked car with her heart torn out. Now that Bill has turned Jessica Hamby into a vampire, she is living with him and he is trying to teach her their own unique code of ethics. Sookie isn't too sure she likes the fact that Bill has this young, attractive woman living him but their own relationship and emotions are too strong to set aside. Tara is still living in Maryann's luxurious home and she continues flirting with Eggs who is also living there. Maryann has a few choice words for Tara's mother when they meet. It also turns out that Sam Merlotte and Maryann have quite a history together and Sam tries to make amends. Maryann has her own ideas however. Jason Stackhouse, who found religion while temporarily in jail, now considers going off to Texas for a Church-run leadership seminar.

"When you love someone, you gotta love it all.
Otherwise it ain't love."
― Jason Stackhouse

The shocking and brutal murder of Miss Jeanette – Tara’s fake exorcist – has the entire town of Bon Temps reeling, and Tara is reluctant to tell the police she knew the deceased for fear that her ex-alcoholic mother, Lettie Mae will find out about Miss Jeanette’s deception and have a relapse. Tara eventually comes forward and is interrogated. Her worst fears are realized when her mother, Lettie Mae, shows up at the police station and is told everything. Tara is eventually released and Maryann has some harsh words for Lettie Mae when she arrives to give Tara a ride.

While going through Gran's belongings, Sookie is visited by Sid Matt Lancaster who delivers news about Uncle Bartlett's death.

Meanwhile, Lafayette has been kidnapped and is being held with others, including Royce, in some kind of bunker. Royce was one of the rednecks who earlier burned three vampires to death. Sookie and Bill’s relationship is put to the test with Bill’s newly made vampire charge Jessica’s impatient ways, even when Sookie attempts to bond with her.

Jason impresses Steve and Sarah Newlin, the leaders of the Fellowship of the Sun anti-vampire church, at a luncheon and is offered a place at a leadership retreat where he will learn to serve God. Sam is troubled by the presence of Maryann and reminisces about their sexual encounter when he was 17 and stole $100,000 from her. He also takes on another young waitress, Daphne Landry. Tara becomes closer with Eggs.

Sookie and Bill are put on even rockier ground when she discovers that he murdered her sexually abusive Uncle Bartlett. He tells her that he did it because he loves her too much to let him get away with what he did to her when she was young. Sookie forgives him and the two passionately make love. It is revealed that Eric is the one keeping Lafayette captive. The episode ends with Royce trying to escape. Eric literally rips him apart, brutally murdering him, spraying Lafayette with blood. 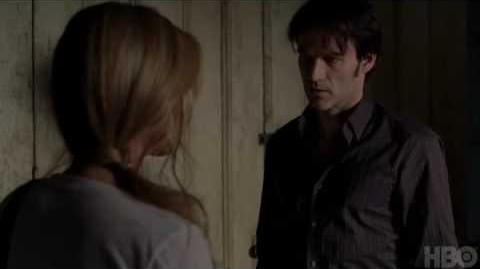 Eric Northman: "Shushing won't do you any good, sweetheart."

Sookie Stackhouse: "Hello? It's me. I'm gonna be a little late. Something real awful happened out here. I'll tell you all about it when I see you."

Jessica Hamby: (Bill's cell phone rings) "Cool! Can I have one of those?"
Bill Compton: "NO!"

Bill Compton: "Do you need me? I can meet you at the bar."
Sookie Stackhouse: "I always need you, but you stay there. It will give me something to look forward to."

Bill Compton: "Jessica, I'm going to have a guest coming over shortly."
Jessica Hamby: "Can we eat her?"
Bill Compton: "You may not!"

Bill Compton: "Sookie. I can not and I will not lose you. For all the ways I have dismayed, offended or failed you.
I swear I will atone. But I´m not sorry. I refuse to apologize for what you have awake in me.
You are my miracle, Sookie. For the first time in 140 years, I felt something, That I thought was lost in me forever. I Love You. And for that I should never feel sorry."
Sookie Stackhouse: "God damn you, Bill Compton. I Love You."