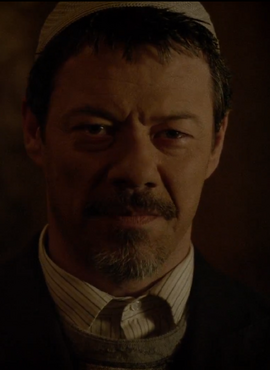 Nizar was a vampire on the HBO original series True Blood. Played by Italian actor Massi Furlan, Nizar enjoys playing Russian roulette, thinking it will bring him closer to Allah, and meets an untimely demise during his only appearance, on the episode "Jesus Gonna Be Here", in the series' seventh, and final, season.

Nizar participates in the deadly game of Russian roulette willingly, believing that it brings him closer to his God and makes him feel alive. Nizar plays a game of Russian roulette against Pam, claiming to have survived 27 times. He pulls the trigger, and survives a 28th time. Pam takes her turn, and also survives. Nizar says that he feels closer to his god, and says he can see the love and pain in Pam's eyes. On Nizar's next turn, moments after saying he is alive, he pulls the trigger and bursts into a pile of blood, meeting the true death. ("Jesus Gonna Be Here")

Retrieved from "https://trueblood.fandom.com/wiki/Nizar?oldid=143137"
Community content is available under CC-BY-SA unless otherwise noted.