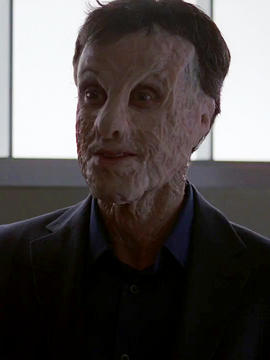 Nigel Beckford is a vampire on the HBO original series True Blood. Played by American guest starring actor Henri Lubatti, Nigel makes his debut on the episode "Authority Always Wins" in the series' fifth season. A grotesque-looking vampire, with a disturbing appetite for babies blood, Nigel plays a recurring role through the same season, and was last seen in the Season 5 episode "Somebody That I Used to Know".

Nigel was once a nurse practitioner in a maternity ward, but instead of delivering babies, he would eat them, leading to him being arrested by the Vampire Authority, and imprisoned in the cells beneath their New Orleans headquarters.

Nigel is seen in the cells locked away with Eric, Bill and Nora. The UV machine they use to burn vampires has taken it's toll on Nigel. His skin is now badly burnt. ("Authority Always Wins")

Nigel taunts Nora with the knowledge that she caused Alexander's death. ("Let's Boot and Rally")

Nigel is released by Salome and joins along with the Sanguinistas. ("In the Beginning")

Nigel returns to the Authority with the rest of the Sanguanistas and expresses his happiness that he ate a child for the first time in ten years. However he does not join them again at a meeting to crush the mainstreamers. ("Somebody That I Used to Know")

It is assumed Nigel was destroyed when the Authority headquarters was blown up with everyone else in the building. ("Who Are You, Really?")

Retrieved from "https://trueblood.fandom.com/wiki/Nigel_Beckford?oldid=138015"
Community content is available under CC-BY-SA unless otherwise noted.