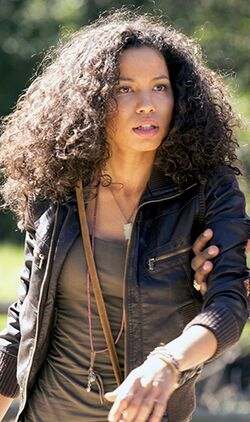 "They're coming for you next!"
―Nicole[src]

Nicole Merlotte (née Wright) is a series regular in the sixth season of True Blood. She is portrayed by starring cast member Jurnee Smollett-Bell. She's also the wife of Sam Merlotte and they have two children, a daughter and son.

Nicole is in her early 20's, а do-gooder to the core. She is naive, optimistic, and charming -- but her idealism is "ultimately vaguely idiotic and dangerous." Nicole is a key member of a band of well-meaning liberal advocates who want to help shield the various supernatural species from persecution by humans. The gang models itself after the civil rights activist group Freedom Riders, who rose to prominence in the 1960s. She could be considered to be a true "bleeding heart". Nicole is not at all concerned with money, but rather with the common good and doing what's right.

Though Nicole is aware of the various supernatural creatures living amongst the human population, she seems to have little real understanding of them. She expresses surprise when she sees a shapeshifter shift into a stallion, and is caught unprepared when a pack of werewolves becomes hostile towards her. Her inexperience causes her to often find herself in dangerous situations, as she is unable to comprehend that the supernatural beings do not want to associate with humans, and thus view Nicole as more of a threat than an aid.

Nicole and her activist group travel to Bon Temps, Louisiana to speak with two groups of supernatural beings about beginning a movement to stop humans from persecuting these species as they did the vampires. Nicole initially tries to speak with Sam Merlotte, telling him that she knows his secret and wants to help him. Sam refuses her aid and tells her that what she's doing is too dangerous and should be stopped.("The Sun")

Later, Nicole and her group approach a pack of werewolves, offering their help to them as well. To their surprise, the werewolves become agitated, and Rikki Naylor shifts into her wolf form and attacks them after learning the group has been taking pictures of them for days. Nicole's friends are slaughtered by the werewolves, and Nicole herself is badly injured, but she manages to escape with the aid of Sam, who had used the attack as a distraction to kidnap Emma Bozeman, the daughter of his deceased girlfriend. He sees Nicole struggling to run from the were camp, so he and Emma help her out.("You're No Good")

Sam takes Nicole to Lafayette Reynolds' car, and the group flee the werewolf camp. After safely escaping the werewolves, Sam shifts into a stallion and carries Nicole even farther from danger, taking her to a hotel room where they hide for the night. There, the two discuss watching people they care about die, and eventually share a kiss.("At Last")

In a local hotel, Sam wakes to find Nicole Wright getting dressed. The two talk and Sam leaves the room to take care of Emma. While he is gone, Nicole tries to call her parents from a payphone, but Sam stops her, telling her that both they and her parents will be killed by the werewolves if she reaches out to them. As they argue, Jackson Herveaux spots them from the upstairs balcony of a neighboring hotel.("F**k the Pain Away")

Sam is checking out of the hotel and comes back to get Nicole and Emma. He finds Nicole just coming in from consoling a frightened Emma. Sam tries to talk to Emma because they must stay on the run. Nicole confronts him about the kind of life Emma will have being on the run getting to Sam's conscience.

Sam meets Martha at a gas station and hands Emma over to her while Nicole watches on. Martha gratefully accepts and allows Sam to say goodbye to Emma. Sam and Emma cry and hug each other before Martha takes Emma and drives away. As Nicole and Sam are about to leave Alcide approaches them asking for Emma. Sam tells Alcide he gave Emma to Martha and it's over. Alcide doesn't seem satisfied questioning Nicole's intentions of exposing them. Nicole swears she will not say a word, Alcide doesn't buy it but Sam reminds him they used to be friends. He is tired of this so if he is going to kill them he might as well get it over with. Jackson, who followed Alcide, walks up silently and watches. Alcide calms down and tells Sam to never come back to Shreveport or Bon Temps and if he does his pack will kill him. Sam and Nicole agree and leave. ("Don't You Feel Me")

Sam knowing he has to go back to Bon Temps to pay his respects, he tells Nicole that she needs to call her mom because he has to go to this funeral even if it's not safe for him to go. She calls her mother and as they wait for her to reach the hotel, Sam takes a shower and Nicole later joins him. Later her mother arrives at the hotel and picks her up and Sam leaves for Bon Temps. ("In the Evening")

Rikki tells Alcide that he is lying out of his teeth about Nicole and Sam being dead, so she begins abusing Nicole and her mother who was captured by the pack. Because Alcide betrayed the pack, Rikki announces she is going to challenge him as packmaster because she knows he will not kill her. Danielle seconds her and they fight. Alcide beats up Rikki but does not kill her.

Alcide takes Nicole and her mother to Sam. Sam asks Alcide why he is here if he threatened his pack would kill him. Alcide tells him his pack days are over and he is only returning Nicole and her mother who were abducted by Rikki. Sam tells Alcide he is welcome to go to the bar and help himself before returning to speak to Nicole and her mother. He tells them he will stay in the bar tonight and they are safe now, and can stay in his trailer until they can get plane tickets out. He steps outside with Nicole and kisses her goodnight, but as he does so he notices something about her smell. He leaves her to go back to the bar and have shots with Alcide. As they talk, Alcide reveals he smelled that Nicole was pregnant and asks Sam if it is his, which Sam says he is positive the baby is his. They take a shot to celebrate in a way although Sam admits he just wants to drink for his dead friend Terry now.

Nicole's mother comes to Nicole and Sam who are sitting at a booth in Merlotte's, and she announces they have plane tickets and it's time to go. Sam tells Nicole he doesn't want her to go and that he wants her to stay here, and Nicole wants to stay. Nicole's mother says she doesn't want Sam who she refers to as "silver fox" coming in and trying to take her daughter who she deems too young to make a decision like this. Sookie enters and asks if she can talk to Sam really quick. Nicole says it's okay because she needs to talk to her mom anyway. Sam takes Sookie to his office and Sookie hugs him tightly. She show him her faerie magic that kills vampires and talks to him about what she has been through, but it can all end if she just lets this magic go. She then admits she doesn't have to be special and part of her always thought her and Sam would always wind up together. Sam tells her to stop her magic and tells her that she has the worst timing ever. He says she kept him on the back burner for so long and that Nicole is pregnant. Sookie shocked and embarrassed, she then congratulates him and leaves. ("Dead Meat")

Retrieved from "https://trueblood.fandom.com/wiki/Nicole_Wright?oldid=143557"
Community content is available under CC-BY-SA unless otherwise noted.