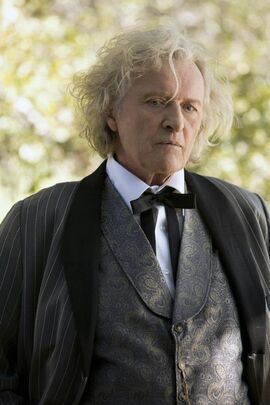 "Warlow orphaned me too. I want that fucker myself."
―Niall Brigant, on the death of his parents.[src]

Niall Brigant is a faerie on the HBO original series True Blood. Played by Dutch guest starring actor Rutger Hauer, Niall makes his debut on the episode "Who Are You, Really?", at the beginning of the series' sixth season. The king of the tribe that the Stackhouse family is from, and the faerie grandfather to Sookie and Jason Stackhouse and their young cousin Hunter Savoy, Niall plays a recurring role through the same season. The oldest supernatural creature currently alive in the series, following the death of Macklyn Warlow, Niall was last seen on the episode "May Be the Last Time", in the series' seventh, and final, season.

Niall is a family oriented man, often acting extremely protective of those who are descended from him. He is quick to seek out those who may harm his family, and is driven by the desire for revenge on the man who killed his parents. He is well mannered, and often reminds Sookie of her "manners" when she talks back or is rude in front of him.  Niall is very wary of others and will scold those that give information to those that he doesn't know or trust.

Niall shows a sense of recklessness. Shown when Ben was found out to be Warlow. He and Jason jumped the gun and went on to fight Warlow by themselves. With the latter getting the best of them. Partially by Niall's rage over Warlow massacre of his family.

Niall is king of the Fae tribe that Sookie is part of and truly ancient, having existed at least 3,500 years before the birth of Christ. Niall claims there was a "Bill's Stake House" restaurant in Bon Temps.

Niall was born to the original family of Fae's thousands of years ago. When Niall was around 3 or 4, Warlow massacred his village and killed his parents. Niall was left to fend for himself, and over time he tracked Warlow. One of his sons "John Stackhouse" came in contact with Warlow, who then had a binding pact promising the first fae bearing female "Sookie Stackhouse" to him.

A furious Jason shares his story with an older gentleman who gives him a ride back to Bon Temps. When the man says that there is nothing Jason can do to keep Warlow away from Sookie, a horrified Jason demands to know how he knew his sister's name. The man laughs and asks "who the hell do you think I am?" Jason attempts to shoot the man but he disappears in a burst of light as Jason tries to avoid crashing into a tree. ("Who Are You, Really?")

Shortly thereafter, the man reappears. It is not Warlow, but Niall Brigant, Jason and Sookie's faery grandfather, who was testing Jason all along (Jason failed, quite miserably). Jason takes Niall back to the Stackhouse home, where he is shown the bathroom where Warlow tried to break through the dimensions. Niall uses the stress of Warlow's attempt to create a portal himself. He re-appears a few moments later, covered in muck, and grimly confirms that Warlow has escaped.

When Sookie finally gets home Niall explains that Warlow has been stalking the Stackhouse family for generations uncounted. Thousands of years ago, he slaughtered Niall's entire village. He eventually located one of Niall's sons and got him to sign the contract promising Sookie to him. He lost the Stackhouses' trail until the night he killed Sookie and Jason's parents, at which point Claudine was able to successfully banish him from this plane. However, the ritual that Sookie and Claude performed gave Warlow a beacon to follow, and he was able to return. Niall further explains that the Stackhouse line of faery is one of the oldest and most powerful: Niall is in fact a faery king. Furthermore, the Brigant/Stackhouse fae have always possessed the unique ability to channel their photokinesis into a ball which can then be used as a potent energy source or weapon. Niall tutors Sookie in this ability, but warns her that since she is only a halfling, she will only be able to use this ability once, after which her light will be expended and she will be human. ("The Sun")

Niall senses Warlow's presence and teleports outside to go after the vampire, as he is about to do so he sees Sookie running out to help the injured Jason. He teleports them inside the house and he tells Sookie that she should fear and not underestimate Warlow. Sookie tells him she won't. Niall tells them he is going out to take the fight to Warlow, before he leaves Sookie asks why Warlow wants her and he tells her that it is because their blood is royal.

The next day he enters Hot Wings only to find the place destroyed and covered with pools of blood. He uses his light to see nature's memory through Warlow's eyes. Niall sees that Warlow killed the faeries and that one of them hit him and he finds Warlow's blood and it glows when he uses his light on it. Niall hears a whimper and finds a severely wounded Claude on the floor and they telepathically speak and Claude reveals that an extremely powerful vampire got in. Claude asks Niall to spare him the pain of a slow death. At first he refuses but he agrees to do it and kills him with his light.

As he leaves the club, he meets the Halfling Ben that came to find the Faeries. Niall tells him that they are dead. Ben bows before him after recognizing him as the king of the fae. Niall tells Ben to get up and he reveals that he came to the club to assemble an army to hunt Warlow and Ben agrees to join him.

Niall and Ben go to the Stackhouse house and Niall informs Sookie and Jason that the Faeries are dead and that Warlow is no ordinary vampire and he shows them how Warlow's blood glows. He later once again senses the presence of a vampire. He and Ben went outside and Niall blasted the vampire and when he got to the vampire he discovered that it was Nora not Warlow. He is distracted by Ben running to help Sookie giving Nora the chance to speed away, he teleported after her. ("You're No Good")

Soon after Niall and Jason discover that Warlow is actually Ben. Jason and Niall's attempt to overpower Ben fails because as he is an ancient vampire so he easily dodges Niall's lightning and blasts him in return. He quickly glamours Jason into forgetting what has just transpired. After Jason leaves Ben/Warlow brings a heavily impaired Niall to the bridge where he entered the world. He opens the portal and tosses Niall through it before he reveals his memory of the night when Warlow returned and massacred the tribe save Niall who was just a boy then. Warlow still seems to harbor some respect for Niall in this moment as he acknowledges they are kin. ("At Last")

Niall manages to return to Earth when Warlow is about to turn Sookie. Having dispatched all of Sookie's friends Warlow is grabbed by Niall who reemerges through the very same portal Warlow earlier appeared to Sookie, Warlow is rendered immobile giving Jason a chance to successfully stake Warlow. Niall has now avenged his parents' deaths at the hands of Warlow 5,500 years ago. ("Radioactive")

Niall is able to read the thoughts of any sentient creature that gives off brain waves. He is also able to generate and control large beams of light, which he uses to attack an enemy or topple large objects. He can morph the light into balls of energy that explode on impact. His accuracy with these blasts has shown to be even more accurate than the Faerie Elder.

His photokinesis can also be used for a number of purposes other than offensive blasts. These include sensing things about other fairies and past events in a location, rendering beings unconscious and returning a person's consciousness. Niall has demonstrated the ability to teleport in a flash of light, something never demonstrated by previous faeries; this proves to be extremely useful as he can avoid the speed attacks of vampires simply by teleporting himself and others to a safe location. Niall can channel his "light" into a ball of supernova energy that can kill any vampire that it touches, which is an exclusive ability within his family and descendants.

Due to Niall's age and status as King of the Fae, his powers are far more advanced than any other pure-blooded fae on the show. However, despite his fae powers being more precise and well-conditioned than those of Macklyn Warlow, he is still no match for him due to Warlow's additional hybrid powers and his resistance to most standard vampire weaknesses.

Retrieved from "https://trueblood.fandom.com/wiki/Niall_Brigant?oldid=143232"
Community content is available under CC-BY-SA unless otherwise noted.