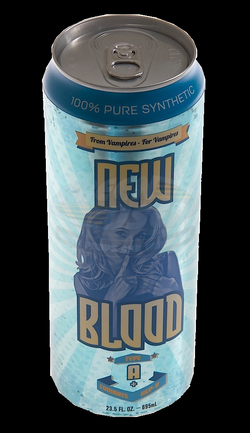 New Blood is the name given to the synthesized version of the Hepatitis V antidote found on the HBO original series True Blood. An antidote originally ingested by Sarah Newlin, mistress of the now deceased Governor Truman Burrell, and ex-wife of Fellowship of the Sun televangelist Steve Newlin, Sarah's blood has become infused with the antidote, giving it healing properties. Blood was thence taken to a laboratory in Stockholm, Sweden, where it was synthesized and canned for global distribution.

It appears to only be available in 24 fl. oz. cans, as shown both on the live commercial and at the Thanksgiving Day dinner scene in the series finale, "Thank You".

Besides being a cure and vaccine to Hepatitis V, it seems to have taken over as the main alternative supplement to vampire nourishment, as the previously synthetic bottled blood titled Tru Blood. It comes in various Blood Type flavors as well, main promotion seems to target AB as the primary choice.

When the Hepatitis V virus was made, the scientists just didn't make the virus, but created an antidote to go along with it, known as the "Cure". The Cure, after being ingested by Sarah Newlin, was the only source for ridding any infected vampire of the disease.

Upon drinking Sarah's blood, any vampire who was infected became healed and immune to the virus thereafter.

The Yakuza-tied Yakonomo Corporation sought to take revenge on Sarah Newlin by killing her before coming to terms that they could synthesize the blood and sell it in mass quantities to make money and restore their reputation. However, they didn't intend New Blood to be a permanent cure, only a temporary one to get vampires to keep consuming it. In order to ensure that the product would have credibility, the Yakuza made a deal with Eric Northman and his progeny, Pam Swynford De Beaufort, for him to become a spokesman for the product and the evidence that the new drink would do as it claimed.

After killing Mr. Gus and his goon, Eric and Pamela take over the production of New Blood.

The New Blood logo, as seen on a display screen used for its new commercial.

The New Blood logo, as seen on a display screen behind spokesman Eric Northman.

24 ounce cans of New Blood, available in a variety of types.

Spokesman Eric Northman holding a 24 ounce can of New Blood. 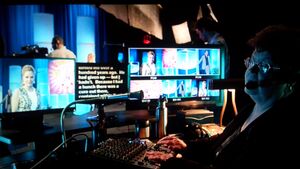