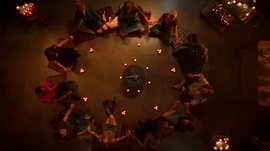 Necromancy is a form of magic that refers specifically to the act of controlling and manipulating the dead. On the HBO original series True Blood, Necromancy is a power usually displayed by witches, wiccans, or other beings that have access to supernatural powers. Seeing as vampires are technically dead, they are very susceptible to its effects and can even be completely controlled by it. It is unknown if vampires themselves can practice necromancy, but it is implied that magic is beyond their reach.

Necromancy is introduced in Season Four. Mediums, or individuals with the ability to see and communicate with the spirits of the deceased, are shown to be able to be possessed by spirits. This is shown when Antonia Gavilán de Logroño, an extremely powerful witch and necromancer from the early 17th century Spanish Inquisition possesses the body of Marnie Stonebrook. Through Marnie, Antonia uses necromancy and witchcraft to seek vengeance on all vampires for what was done to her during her life in the 17th century, and ultimately, her death during the inquisition.

Antonia was noted to be among history's most powerful necromancers, and as such, she was greatly feared by vampires. She lived during the 16th and 17th century in Spain, and could easily control vampires. Even without necromancy, Antonia was a powerful witch in her own right, able to perform a vast array of spells and magic through witchcraft.

It was said that Antonia turned to necromancy to protect her village from sickness. She was noted to be a healer before turning to the dark arts, and eventually was imprisoned, along with her coven where she was tortured, raped and fed upon by vampires. She was burned at the stake during the inquisition, but not before she performed a powerful spell that drew all vampires within twenty miles into the sunlight, effectively killing them.

Marnie Stonebrook was a Medium and lesser witch who contacted and took within herself the spirit of Antonia. She was not particularly powerful on her own, never fully capable of achieving magic through the usage of witchcraft alone. She assumed the position of host to Antonia's spirit in order to attain access to the powers of witchcraft and necromancy, and eventually took on Antonia's goals of vengeance against vampires as well. After Jesus Velasquez, a moderately powerful Brujo severed the bond between Antonia and Marnie, Antonia moved on to the peace of the afterlife. After Marnie's own death, she possessed Lafayette and killed Jesus to steal his Brujo/Demon magic/powers, using them to gain power once again. She was later persuaded to move on to the afterlife by Antonia.

Although not really a witch or a necromancer, Holly is a practicing Wiccan who has achieved many feats through spellcasting and witchcraft, including Resurrection, performing the Incantation of the Sun, Circle-Drawing a protective barrier, and calling forth the Ghosts of Samhain. In her own right, Holly is theoretically a practiced witch capable of performing powerful magic and necromancy, although she is never portrayed as having the same level of power as other Antonia herself.

Necromancy has been displayed in many different ways on the show so far, such as:

Interacting and communicating with the dead is the most basic form of necromancy. Mediums, as well as witches have been shown to contact spirits many times.

Mediums in particular are susceptible to bodily possession, the process in which the spirit of a deceased individual takes over the physical body of a host in order to achieve their ends before moving on to the afterlife.

Through the power of witchcraft, Marnie and her Coven are able to resurrect Marnie's familiar; her bird Minerva. Minerva is completely restored to life, and attempts to fly away, but died again upon exiting the magic circle in which the ritual was performed.

Throughout history, necromancy has been largely associated with raising the dead, and creating zombies. This is slightly demonstrated when Martonia performs a rotting curse upon Pamela Swynford de Beaufort, which causes her skin, body and internal organs to display signs of rot and decay. When chanting the spell, she says in Spanish, "Walking corpse, see yourself for what you are," so it is implied that this reveals a vampire's true nature by removing their body's capacity to preserve itself.

Manipulation of the Undead[edit | edit source]

This is the most potent power of necromancy displayed on the show. Martonia uses several different spells to force vampires into servitude, placing them totally under her will and control. The wielder can also have more limited effects on the dead, such as when Martonia erases Eric's memory or drives the vampires to walk into the sun. She exerts total domination over Luis first, making him her slave, then to Eric, and upon the three sheriffs as well. This particular spell dominates the mind of the vampire, making them servants with absolute loyalty to the spell caster. She later casts a drawing spell on Eric, Bill, Pam and Jessica to pull them into the sun barrier she'd created, which would have killed them. This spell temporarily seizes control of a vampire's body and forces them to move against their will, despite their still being conscious. As stated by Bill, Necromancy does not grant power over the living, such as humans.

Because of this power Necromancers have historically been feared and persecuted by vampires.

Incantation of the Sun[edit | edit source]

Quite possibly the most powerful spell displayed on the show, this was the most notable ritual performed by Antonia, both in life and in her possession of Marnie Stonebrook. This form of necromancy allowed her and her coven to mentally compel all vampires within a twenty mile radius and force them to willingly walk out into the sunlight, killing themselves. She killed a vast amount during the Spanish Inquisition, but only managed to destroy one vampire with this particular spell during her time with Marnie, due to Vampire King Bill Compton's orders for all vampires to restrain themselves with silver during the daylight hours.

Holly Cleary, Sookie Stackhouse and Tara Thornton, all former members of the Shreveport Coven of Witches (at some point or another) performed a powerful summoning spell to call forth all the spirits of loved ones past, using the spiritual gateway of Samhain, otherwise known as Halloween, or the Witches New Year. This spell summoned several spirits that forcefully pulled the soul of Marnie Stonebrook out of Lafayette Reynolds' body (a medium), and ended her reign of terror over vampires and citizens of Bon Temps, Louisiana. It should be noted that Marnie was persuaded to continue to the afterlife by Antonia. She was forcefully pulled from Lafayette's body, but moved on to the peace beyond of her own free will.

Under Antonia's spell, Jessica attempts to meet the sun.
Add a photo to this gallery
Retrieved from "https://trueblood.fandom.com/wiki/Necromancy?oldid=142010"
Community content is available under CC-BY-SA unless otherwise noted.