View source
watch 01:55
Cobra Kai Season 4 - The Loop
Do you like this video?
Play Sound 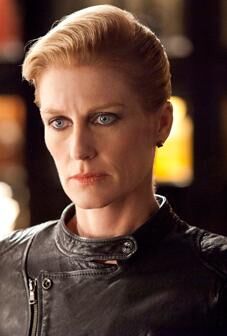 "I have been alive for 816 years. I refuse to be retired like a fat first wife!"
―Nan Flanagan[src]

Nan Flanagan was the official American Vampire League spokesperson on the HBO original series True Blood. Played by American starring actress Jessica Tuck, Nan makes her debut in the series' premiere episode, "Strange Love", at the beginning of the series' first season. A prominent vampire rights activist and key vampire spokesperson who spoke on the behalf of the AVL, Nan was often seen on television debating over the rights entitled to her species, but off-camera however, she displayed a ruthless attitude and focused on pushing through the AVL's agenda. Playing a recurring role through the series' first, second, third and fourth seasons, Nan was a figure of authority among vampires, being both a member and a representative of The Vampire Authority, and ranked higher than most vampire monarchs and sheriffs. Nan had the power to execute, fire and appoint sheriffs and monarchs, and met an untimely demise on the episode "And When I Die", at the end of the series' fourth season. She appears once more, in a flashback on the episode "Fire in the Hole", in the series' seventh, and final, season.

Nan was very concerned with the representation of vampires in the U.S. media, deciding to fire Godric after his actions with the Fellowship of the Sun and ordering for the death of Russell Edgington after he murdered a human on live television. Ultimately, her concern for media portrayal brought her down; when witch Marnie Stonebrook started a violent campaign against vampires, she would not allow Bill, the local vampire king of the time, to kill the witch. This lapse in judgment made it possible for Marnie to invade an important PR event and wreaking havoc with mind-controlled vampires. Nan learned the Authority was planning the True Death for her, so she attempted to rebel by joining forces with Bill Compton and Eric Northman, offering them secrecy about their Faerie friend. They would not have any of it and staked her.

Nan was born in the late 1100s and has been active in politics for at least a century, having being acquainted with both Presidents Roosevelt, although what her role or connection with these two is unknown.

In 1982 Nan met Bill Compton in London, England. They talked, among other things, about fellow vampire Louis Pasteur and other vampires trying to create an alternate source of food for vampires.

In 1986 she met Eric Northman and Pamela Swynford De Beaufort in Rhone Valley, France. She told them to obey the Authority's laws and notified them about the making of the synthetic blood.

After the Dallas "PR disaster" (the suicide bombing of Luke McDonald), Nan angrily denounced Godric for what happened, and he offered his resignation as sheriff before voluntarily committing true death at sunrise. ("I Will Rise Up")

Nan appeared in an interview for "Sunday Morning with McCafferty" along Congressman David Finch. She announces that the AVL is close to obtaining the majority necessary to vote the "Vampire Rights Amendment" (VRA), which would give equal rights to vampires in the US. ("I Got a Right to Sing the Blues")

Nan visits Shreveport, Louisiana on her way to Portland, Oregon. There she visits Fangtasia and takes a statement from Eric Northman, concerning the disappearance of the magister and the plans of Russell Edgington. The next night Nan informs Eric that the Authority will deny any knowledge about Eric's interview and the situation concerning Russell, and that he has their permission to kill Russell, but without any support from the Authority.

Nan tells Eric that either he deals with Russell or she will have his fangs. She then leaves for a plane, headed to Oregon, where she plans to promote the VRA. On the way to the airport, Nan shows she doesn't live on Tru Blood alone, drinking from the femoral artery of a woman riding in the limo with her. She then watches Russell kill a news anchor on live TV, who was reporting about the VRA, and declare that vampires are superior to humans. ("Everything Is Broken")

Following this event, Nan is seen on TV denouncing Russell Edgington as a crazed terrorist. She insisted that he is a madman and does not represent vampires as a whole, and that the vampire race should not be punished for the actions of one man. ("I Smell a Rat")

A year later, Nan continues to try and smooth over the damage caused by Edgington's rampage. She is seen at Fangtasia filming a public service message with Pam. However, she is unhappy with Pam's effort and Eric Northman films a more appropriate message in her place. ("She's Not There")

In a flashback, Nan startles Bill while he is feeding in London, 1982. She explains who she is, and that she has been watching Bill. She is interested in having him infiltrate and disrupt the vampire hierarchy. She explains that Louis Pasteur, also a vampire, has almost created a synthetic drink for vampires to survive. Bill accepts, and Nan helps destroy Sophie Anne, making Bill the new King of Louisiana. ("You Smell Like Dinner")

A year later, Nan pays a visit to Bill, angry for making Eric go near Wiccans. She commands him to take care of the situation personally. ("I'm Alive and on Fire") After arresting the now-amnesiac Eric, Bill contacts Nan via webcam. Bill lies to Nan about Eric, saying he is a danger and is being used as a weapon by Marnie. Bill requests a warrant to impose the true death on Eric, which she grants. However, after hearing Eric's comments prior to being staked, Bill releases Eric. ("I Wish I Was the Moon")

On October 28, Nan comes to Bon Temps for the next day's "Festival of Tolerance" in nearby Shreveport. Not pleased with the troubles Bill is having with witches, she goes to ground with Bill and Jessica under silver chains, in case Marnie/Antonia attempts the "sunwalking" spell again. The next night, she is among only three vampires in attendance of the Festival (Bill and a woman whose living sister introduces her), when Marnie/Antonia uses Eric--now truly under her influence--along with the other three Louisiana sheriffs, to take out the security guards protecting the event. ("Let's Get Out of Here")

During the "Festival of Tolerance" event Nan overpowers one of the Louisiana sheriffs, Blackburn, and stakes him. Later, Nan is against blowing up the Moon Goddess Emporium but Bill goes over her head. She takes silver during daylight hours with Bill, Jessica, Eric and Pam. Eric mentions that her time is almost over and Nan tells him that both he and Pam will meet their true death. ("Burning Down the House")

Shortly afterward she returned to Bill's mansion accompanied by guards. She informed Bill and Eric that she had been terminated from her position as spokesperson for the AVL and as a member of The Authority and that she was now working with other vampire factions to accomplish their goals and was trying to recruit them. She also admitted that she knew that Sookie was a Fairy. Seconds later Eric killed her guards and Bill staked her. ("And When I Die")

Nan had the common powers and weaknesses of a vampire such as superhuman strength, speed and healing. She was the oldest female vampire to appear in the first four seasons of the show. She was superseded by Salome Agrippa in the fifth season. Due to her advanced age, she was much stronger and faster than younger vampires such as Sophie-Anne Leclerq, Talbot Angelis or Bill Compton, but far weaker than older vampires such as Eric Northman or Godric. Sunlight would quickly kill a vampire of her age. ("Burning Down the House")