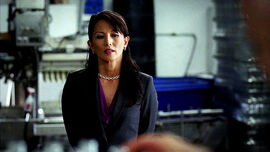 "Don't fuck with me!"
―Ms. Suzuki, holding her own against a crazed Sarah Newlin [src]

Ms. Suzuki is a minor character on the HBO original series True Blood. Played by Japanese American actress Tamlyn Tomita, Ms. Suzuki makes her debut on the episode "Who Are You, Really?" in the series' sixth season. A businesswoman working for the Yakonomo Corporation, the company responsible for the production of Tru Blood, her accent suggests that she was American, at least by upbringing. She made a deal with Governor Truman Burrell, during which the balance of power continually shifted between them. Although she puts up a good fight, Ms. Suzuki is murdered by Sarah Newlin in the Season 6 episode "Dead Meat".

Suzuki is a successful, smart and a tough negotiator. She believes in the quality of her work, and is horrified when she learns that her trust has been betrayed by Truman Burrell.

Ms. Suzuki works for the Yakonomo Corporation, the company responsible for the production of Tru Blood, a synthetic blood created to provide sustenance to vampires.

Ms. Suzuki meets with Governor Burrell at an abandoned bottling facility somewhere in Louisiana, just after the recent bombings of the Tru Blood factories. She is initially skeptical of Burrell's offer to let her use the bottling facility to produce and package Tru Blood in secret, given his well-known anti-vampire agenda, but Burrell assures her that if she can restore the flow of Tru Blood and turn the vampires back into tax-paying citizens, he would consider it an investment well spent. ("Who Are You, Really?")

Ms. Suzuki later returns to confront Governor Burrell over lying about being a silent partner, but when she sees the Tru Blood being taken deeper into the facility, she begins to suspect that something is amiss. When she is confronted by Sarah Newlin instead of the governor, she becomes irate, and violently knees Sarah in the crotch, forcing the other woman out of the way so she can find Truman.

Inside the facility, Ms. Suzuki sees that an adulterant is being infused into the Tru Blood production line, tainting the bottles with Hepatitis V. She attempts to contact the FDA, but is attacked by Sarah, who unsuccessfully tries to snap her neck.

Ms. Suzuki escapes, only to later be trapped on the balcony of the male general population. Her heel gets stuck in the grates, causing her to twist her ankle and fall face first onto the grate. Sarah is finally able to overpower Ms. Suzuki and slams her face into the grating several times before stabbing her in the head with her own high heeled shoe. ("Dead Meat")