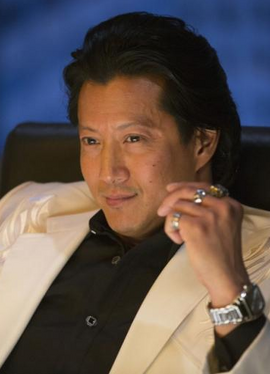 Kazuo Ryuichi, better known as Mr. Gus, Jr., was the North American president of the Yakonomo Corporation on the HBO original series True Blood. Played by Korean-American co-starring actor Will Yun Lee, Mr. Gus makes his debut on the episode "Karma" in the series' seventh season. Playing a recurring role through the same season, Mr. Gus is the secondary antagonist of Season 7, and met an untimely demise in the series' finale episode, "Thank You", in the series' seventh, and final, season.

Mr. Gus is a manipulative, cunning, and vengeful man who is not afraid to resort to violence to get what he wants. However, he also adheres to a code of honor and is, in his own way, honest.

Mr. Gus Jr. is a wealthy, cowboy-hat-wearing Japanese executive who speaks with a Texas drawl. He inherited both the Yakonomo Corporation and his nickname from his father, Mr. Gus Sr. He presents himself as an easy-going, business-oriented professional, but he is not above using questionable or illegal tactics to get what he wants. He incorporates the use of the Yakuza, a Japanese crime syndicate, into his business affairs. He also has close connections with the Japanese government, and can easily attain access to classified intelligence resources upon request. Despite his unflinching use of underworld contacts, Mr. Gus has a strong sense of honor typical in Japanese culture. For example, he is known to keep his word. Mr. Gus is human.

Mr. Gus has a vendetta against Sarah Newlin for ruining his corporation by tainting Tru Blood with Hepatitis V. He dispatches the Yakuza to hunt her down. In their pursuit of her at a Ted Cruz gala at the Bush Library in Dallas, they cross paths with Eric Northman and Pam, who are also out for revenge against Sarah for being complicit in the death of Nora, causing Eric's Hepatitis V infection, and unleashing the virus upon the world. Mr. Gus interrogates Eric and Pam for information on Sarah's whereabouts, and negotiates a deal for information in exchange for their lives and collaboration in attaining and killing their target. ("Karma")

Keeping his word, Mr. Gus allows Eric and Pam to accompany him to the home of Amber Mills, Sarah's estranged vampire sister. Mr. Gus is with them when they learn from Amber that Sarah had consumed the only known antidote to Hepatitis V. After Eric stakes Amber in a rage, Mr. Gus proposes a business venture with the two vampires. He suggests that they proceed with their plan to locate Sarah. But instead of killing her, the Yakonomo Corporation will harness her blood and synthesize it as a replacement for Tru Blood: New Blood. He goes on to guarantee Eric 49% ownership of his $3.5 billion-per-year company. When Pam inquires how they are to find Sarah, Mr. Gus replies that Yakonomo has connections with the Japanese government, and he can gain access to the use of official intelligence resources which can locate anyone, which begs the question as to why Yakonomo required the assistance of Pam and Eric to begin with. When Eric reminds him of this, Mr. Gus admits that his interest in Eric is purely for public relations, and that consumers will have a better chance of responding favorably to a handsome vampire who has been cured by their product.

Later that day, as Eric and Pam rested, the Yakonomo Corporation located Sarah via satellite. The Yakuza were anxious to get to her, but Mr. Gus appeared to be hesitant about leaving Eric and Pam behind. One of his assistants remarked to him that he doesn't need them, and he can always find another vampire to be his spokesperson. However, his sense of honor compelled him to keep his word to the vampires, and wait for nightfall so that they may accompany him to acquire Sarah. ("May Be the Last Time") 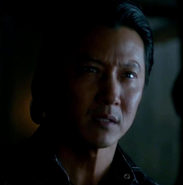